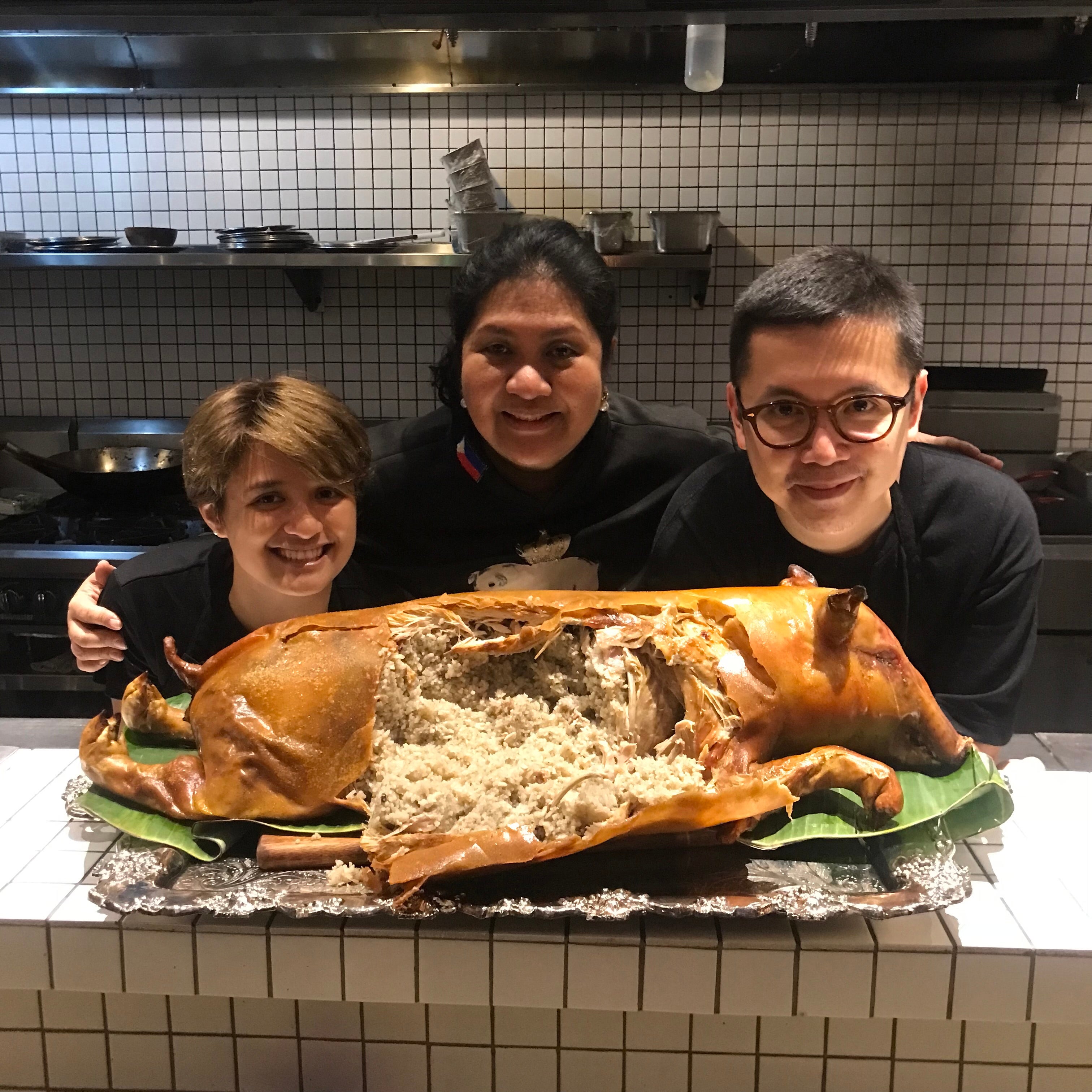 There is no food as satisfying as one that’s rooted in memory. This was what I digested after polishing off a plate of grilled chicken hearts on a bed of kamut grains, quail egg yolk and beet shards. It was the ninth course in a pretty long degustation hosted by Dedet de la Fuente of Pepita’s Kitchen and Nicco Santos of Hey Handsome.

“The chicken heart is something I fell in love with during the times I waited for my sister in her school,” said Santos, who was responsible for the dish. “I would have a couple of sticks with our family driver.”

It’s memories like this that season the dishes. It’s as satisfying as being let in on a secret. This was true throughout the Lechon Diva x Hey Handsome collaboration, which this writer got to sample a week before the actual three-day dinner (on April 25, 25 and 30). Every dish was inspired and extra decadent.

The event has been five months in the making, said De la Fuente, who recalled the time Santos asked her if she wanted to work on a dinner together.

“Aside from her energy, which my team and I have grown to love, we wanted to collaborate with someone who’s focused on something. In her case, lechon,” he said. “Her palate is so good and we wanted to learn from her. We wanted to work with a person who’s so generous and passionate and so happy all the time.”

For De la Fuente, who has brought her beloved roasted pig and an array of Filipino dishes to the United States, London and Singapore, it was the chance she has long been waiting for.

“I’ve never had a collab here. Restaurants abroad, yes. But none in Manila,” she said. However, it took time to happen as both chefs became busy running their own businesses.

For the chefs, composing the multi-course menu proved to be surprisingly easy as they had a treasure trove of family memories and travels to get inspiration from.

The first course, which came in a brown bag, was conjured from De la Fuente’s childhood. It had three small pieces of soft pan de sal, stuffed with a variety of fillings she got as school baon: pancit, adobo and foie gras with kesong puti. It was personal as her father typically prepared it for her.

The grilled baby squid, which is her father’s favorite, sat on a bed of homemade oyster sauce. It was packed with something her daughters Lileya and Liyora like to eat: mashed cauliflower.

Influenced by her trips down south and in Morocco, she also served tocino and tapa kebabs, mami noodles with pork cubes drenched in Bicol express sauce, and her take on the exotic Cebuano food item, tuslob buwa. Her version has sisig rice wrapped in coconut leaves like a puso, served with a flavorful gravy made with pig’s brain and liver.

As for Santos’ repertoire, he based it on the things that he enjoyed eating as a kid.

“I grew to love dinuguan because my lola’s cook made it every week. She also had it with puto and dipped it in the sauce.”

For his dish, he traded the traditional Filipino rice cake with an Indonesian delicacy that’s very similar in taste and texture called pukis. It came with a duo of sauces: black from dinuguan na kambing, and white, which is a scented coconut cream, topped with crumbled chicharon bulaklak. It’s a dish that’s dear to his heart as he remembers discovering pukis together with his late grandmother in Jakarta when he was 12 years old.

“She kept laughing because of the name. We tried it out of curiosity,” he said. “It has a particular memory that I cherish because it was just the two of us traveling. Plus, she laughed so hard.”

Though these are the things he loves to eat, Santos, who is more eloquent with Peranakan cuisine, admits that they are not necessarily dishes he knows how to cook. And so he asked for the help of his team at Hey Handsome. They all chipped in with the recipes, the taste and the authenticity of the flavors.

“I was basically just the orchestrator. Each and everyone of us had a participation. Even the front of house. In the end, we all tried to remember our childhood. It was fulfilling for everybody.”

As for the piece de resistance, De la Fuente took care of the lechon, while Santos took charge of the stuffing. He wanted to make something Filipino (it’s akin to making kulawo) and Malaysian (similar to a nasi lemak) at the same time. And so he burnt the coconut in the husk until it turned charcoal-black, squeezed the milk out of the grated meat, then used that to cook the rice. The result was gray-colored grains that lent a smoky, subtly sweet flavor—a perfect match to the rich and juicy posted pig. It’s a dish that not only showcases and displays the best of their culinary styles, but also represents the harmony and success of their partnership.