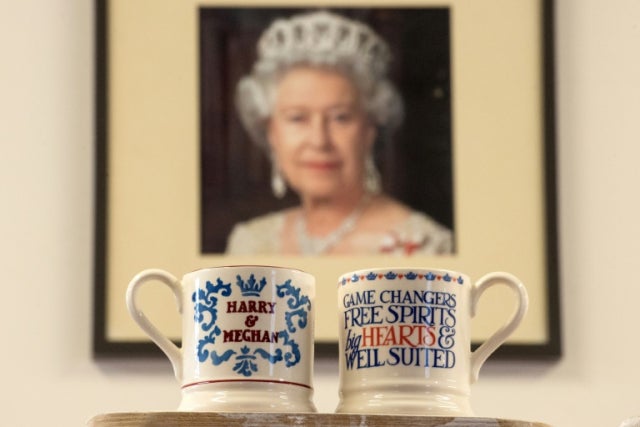 Windsor prepares to cash in on royal wedding extravaganza

From biscuits to beer and traditional mugs, businesses and Windsor residents are making the most of royal wedding fever with one month to go to the nuptials of Britain’s Prince Harry.

Within hours of Harry’s proposal to Meghan Markle being announced in November 2017, online store Jewlr.com had created “The Duchess” replica engagement ring.

Excitement over the white coat Markle wore following the engagement prompted the website of its designer, Canadian brand Line, to crash.

Seven years since the last high-profile royal nuptials — the wedding of Prince William and Catherine Middleton — Britain has raced to prepare for the national event.

The line has been created by the Royal Collection Trust, which manages the royal art collection and the contents of the various palaces.

But royal wedding memorabilia has extended far beyond the official souvenirs.

A brewery in the town of Windsor, where the couple will wed on May 19, has concocted a regal-themed brew for the occasion.

Meanwhile, “Crown Jewels Heritage Condoms” have hit the market at £10 for a box of four.

Described as being “fit for a prince,” the novelty contraceptives are sold in a souvenir box featuring an image of the happy couple.

As the box is opened, the British and American national anthems ring out, according to an online advert.

Between the memorabilia, souvenir magazines and fashion items, royal enthusiasts are also expected to spend more on food and drinks as pubs have been granted late closures over the wedding weekend.

The combined boost to the economy has been estimated at £120 million (139 million euros, $171 million) by the Center for Retail Research.

The royal wedding could overall bring more than £1 billion to the UK this year, according to consultancy firm Brand Finance, including £300 million in tourism.

Foreign visitors flocked to the UK in April 2011, when Prince William married Kate, with numbers jumping by 350,000 year-on-year.

A weakened pound coupled with “an incredible media interest” in the upcoming nuptials will result in even higher visitor figures next month, Brand Finance said.

Police are preparing for more than 100,000 people to visit Windsor, around 30 kilometers west of London, for the wedding day.

Locals are ready for the windfall, charging tourists and global TV stations sky-high prices to stay in the town.

Weeks ahead of the celebration, one house in the town center — advertised as “ideal for the royal wedding” — is charging £3,500 per night.

But the financial benefits are expected to reach well beyond the wedding day, thanks to the “Meghan Effect” of fans paying particular attention to her fashion choices.

“Now, as she becomes a member of the royal family, that effect on brands is likely to grow even more,” said Brand Finance, predicting her allegiances will switch to UK designers.

“It can be expected that, supported by her association with ‘Brand Monarchy’, she will become a powerful ambassador for British brands, especially in her native United States.” CC

Trump, May, Obamas not invited to royal wedding