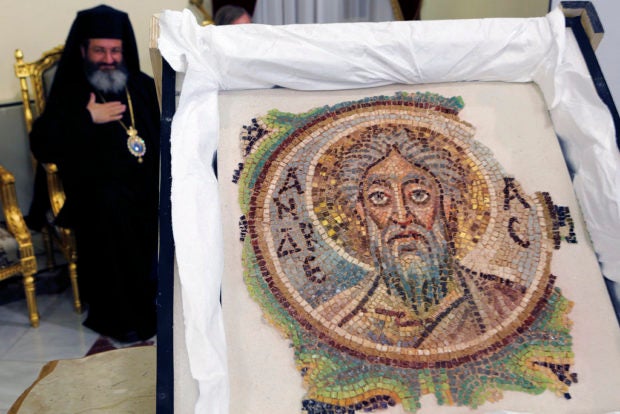 A Christian Orthodox cleric sits by the extremely rare 6th century mosaic depicting St. Andrew, during a ceremony of repatriation at the Archbishop in capital Nicosia, Cyprus, Monday, April 23, 2018. Archbishop Chrysostomos II told a ceremony Monday that the artistry coupled with the rarity of the mosaic - one of only a handful which survived a period in the 8th and 9th century which saw the destruction of many such mosaics and icons - had become a symbol of Cyprus' "stolen heritage." (AP Photo/Petros Karadjias)

NICOSIA, Cyprus  — A rare 6th-century mosaic depicting the St. Andrew that was taken from a looted church in the Cyprus’ breakaway north has been returned after four decades, the head of the island nation’s Orthodox Christian Church said Monday.

Archbishop Chrysostomos II said that the artistry that went into the mosaic coupled with its rarity made the work a symbol of Cyprus’ “stolen heritage.”

It is among only a handful of mosaics to have survived a period during the 8th and 9th centuries when many Orthodox icons were destroyed.

The mosaic showing a bearded St. Andrew — among Christ’s first Apostles — was one of several that went missing from the Church of Panayia Kanakaria after Cyprus split into ethnic Greek and Turkish sides in 1974.

A Turkish art dealer, Aydin Dikmen, was arrested a quarter-century later for selling that piece and others from Kanakaria Church, as well as artworks from other churches.

Most of the Kanakaria Church mosaics have now been repatriated with the exception of one of St. Luke.

London-based Greek Cypriot art dealer Maria Paphiti located the St. Andrew mosaic in 2014 after another dealer asked her to verify the origin. When the dealer was informed that the mosaic belonged to the Cyprus Church, he agreed to return it as long as his expenses were covered.

Paphiti reached out to Greek Cypriot businessmen Roys Poyiadjis and Andreas Pittas for help covering the cost of the mosaic’s repatriation, which came to 50,000 euros ($61,200.).

Archbishop Chrysostomos honored the three of them Monday during a ceremony at Cyprus Church headquarters.
Cyprus hosts a second mosaic of the same rarity and time period depicting the Virgin Mary. A third resides in the Orthodox monastery of Saint Catherine at the foot of Mount Sinai. MKH