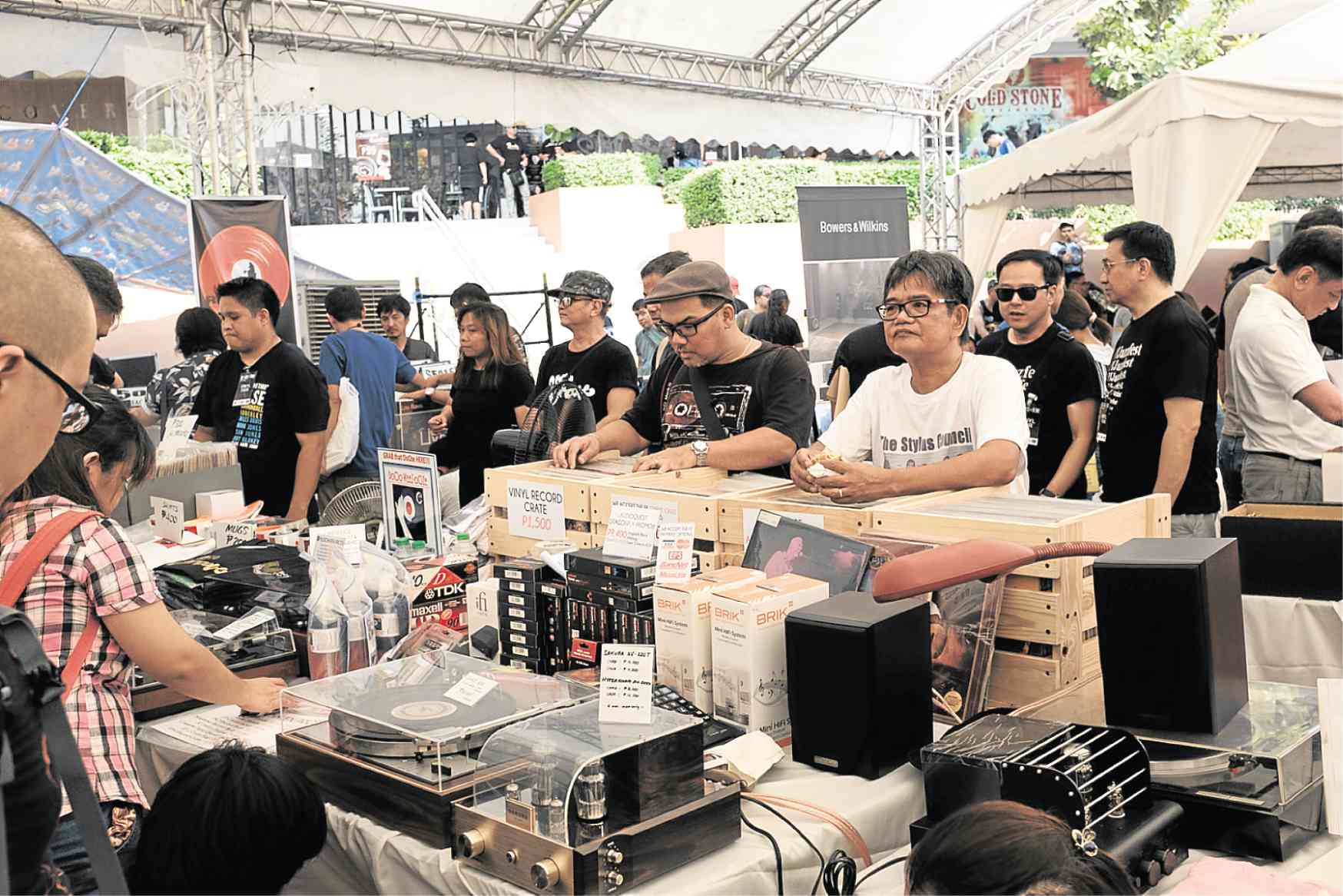 Collectors rummage through vinyl collections at the UP Town Center event. —PHOTOS BY ALEXIS CORPUZ

Once the exclusive fetish object of a fringe group of collectors, audiophiles and music nerds, the vinyl record—once thought to be on the brink of extinction—has made an amazing comeback in the last five years.

The vast majority of listeners still get their music as digital downloads or from streaming services like Spotify.

But for those who want their music packaged as an actual physical object, rather than a stream of bits and bytes, the 12-inch long-playing record has overtaken the compact disc as the format of choice.

In fact, unless it’s a mainstream pop release, it’s probably easier now to find an album on vinyl than on CD, since the demise of retail chain music stores like Tower Records and Music One.

Mall outlets such as Astrovision and Fully Booked have been selling vinyl records for a few years now, even as CDs take up less and less space on their racks.

The majority of enthusiasts, however, get their vinyl fix from a growing number of small independent shops selling new and used records. Some of these have been around since the 1990s, but most have sprouted in the wake of the current vinyl revival.

Last April 21, a few hundred or so members of the “vinyl community” braved the blistering summer heat and jostling crowds of crate-diggers to celebrate Record Store Day Pilipinas 2018 at the UP Town Center by doing what they do best—hunting records.

Started in the United States in 2008 by a group of independent record stores, the annual event has grown into a global marketing phenomenon, with record labels timing the release of new vinyl titles to coincide with the date, which is celebrated in multiple cities in the US, Europe, Japan and several other countries.

This is the second year Record Store Day has been marked in the Philippines. More than 20 independent record stores/sellers brought their wares to the event, organized this year by indie label Offshore Music and record retailer Satchmi.

Apart from new and used records, the event featured performances by Ely Buendia, Apartel, Itchyworms, Jun Lopito and other indie artists, most of whom have vinyl releases out.

The crowd was dominated by middle-age men in rock T-shirts, eyeing pricey items like the newly remastered four-LP release of Led Zeppelin’s live “How the West Was Won” box set, or swooping down on mint copies of Prefab Sprout’s “Steve McQueen,” or the Smiths’ “Hatful of Hollow.”

Given the large contingent of music snobs in the vinyl community, best-selling titles tend to be reissues of classic albums. The vinyl reissue of Radiohead’s 1997 album “OK Computer” was the best-selling LP of 2017, followed closely by the Beatles’ “Sgt. Pepper.”

But mainstream acts from Ed Sheeran to Jay-Z also release their albums on vinyl now, pointing to the increasing popularity of the format among younger listeners. There was a scattering of a few of them on Record Store Day.

The greatest obstacle to the growth of vinyl used to be the scarcity of equipment to play them on. Enthusiasts had to make do with a vintage turntable and stereo scrounged from their parents’ storerooms, or spend big money on an audiophile turntable.

Now you can simply order one online. They range from dinky plastic novelty items to heavy-duty workhorses meant for DJ use, and are priced accordingly.

The point is, one can find a decent, serviceable record player without too much fuss, making it easier than ever to get into vinyl.

Of course, there’s also a downside.

A lot of people started buying records because they were cheap. Not anymore.

New vinyl albums typically cost anywhere from P1,000 to P1,500 per disc. Long-players are still a specialty item made by a few pressing plants in the US, Europe and Japan. Last year, new record pressing plants were opened in Australia, South Korea and China to meet the growing demand for vinyl, but prices have held steady.

High demand has also pushed prices of used records up. One used to be able to find them for P10-P20 at thrift stores and surplus shops; now they go for 10 to 20 times the price, depending on condition, or even more if they’re “rare” items.

In order to extract the vaunted superior sound quality of analog recordings from the grooves, you also have to shell out considerable cash for a decent turntable, decent cartridge and stylus (or what used to be called the “needle”), and a stereo system with a phono input, all of which will set you back at least several thousands of pesos. (The Rega P1, for instance, the most-often recommended “starter” turntable, goes from between P15,000 to P20,000.)

So, why go the vinyl route when you can get all the music you could want for free, or nearly free?

A cursory survey of vinyl aficionados reveals a variety of reasons, most of them subjective: the warmth of analog sound when played on a very good sound system; the almost meditative ritual of cleaning the record, placing it reverently on the platter, putting the needle on and sitting down to listen to a favorite record; the satisfaction of holding an actual artifact in your hand (as opposed to juggling a file on your computer or phone).

In the end, it’s a matter of taste, and how much one is willing to fork out to satisfy it.