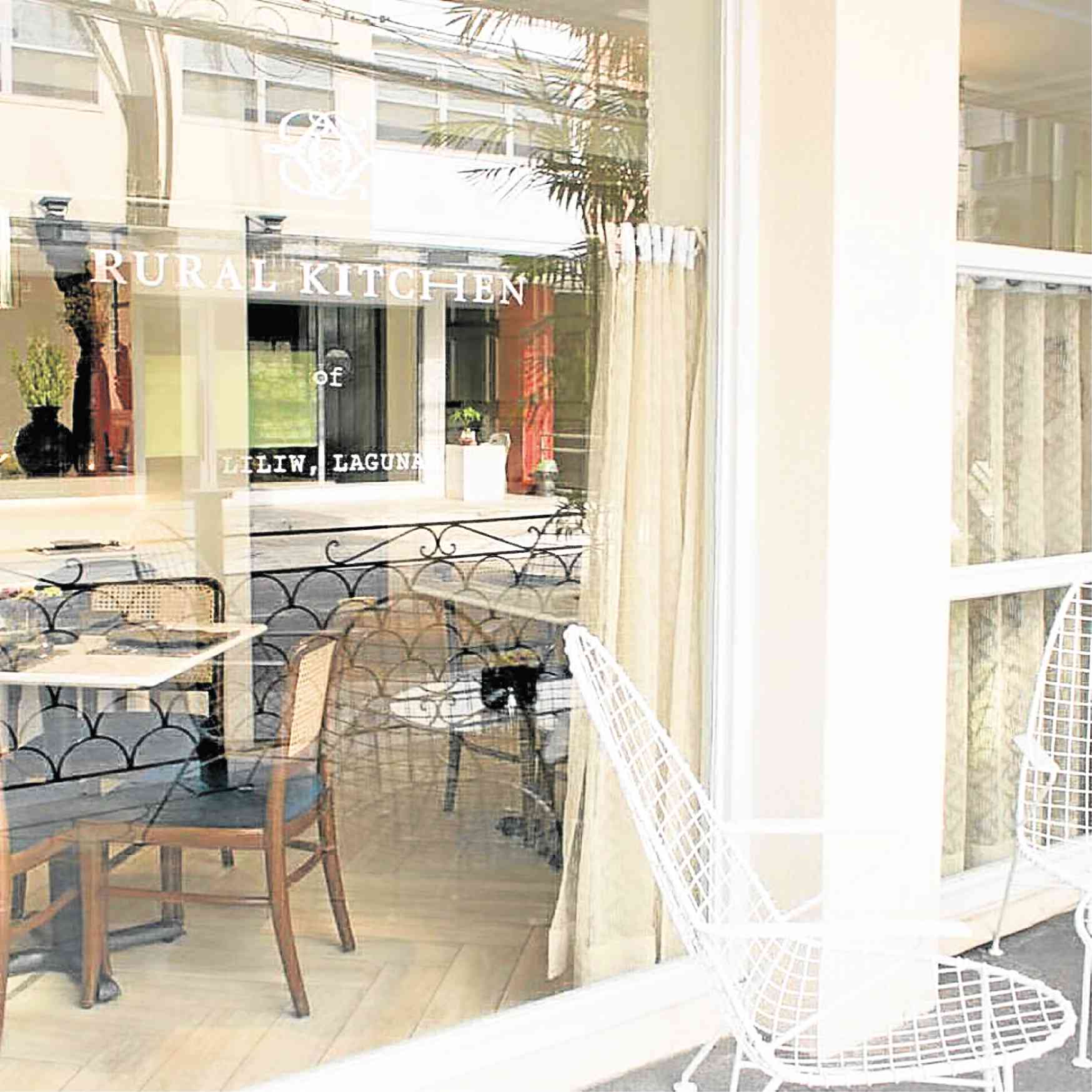 Exterior shot of Rural Kitchen of Liliw, Laguna—PHOTOS FROM THE RESTAURANT’S FACEBOOK PAGE

Rural Kitchen of Liliw, Laguna ‘a work in progress’

It’s almost always better to be understated than overstated. The classical way of describing food on menus was what editors would call a head followed by a subhead. For example, “Adobo of Baby Pork” is followed by the descriptive title “Gently simmered grass-fed pastured pork simmered in a piquant sauce of palm vinegar and home-brewed soy sauce with heady notes of garlic and a brush of laurel.” More contemporary fine-dining restaurants have started using eccentric punctuation and whimsical names that give away nothing: “Walking in the Woods {game :: cheese :: agony}” and so on.

St. John Restaurant, in London, was one of the first restaurants to purposely eschew ornate descriptions for laconic short titles that belied the complexity of the dishes. If they said “Roast Lamb” you knew, because it was Fergus Henderson, that it wouldn’t simply be roast lamb, but an interesting and well-thought out, as well as perfectly executed, roast lamb.

The best restaurants are those that don’t need to rely on flowery prose on the menu to entice customers. Sometimes the food is not what you expect —Heston Blumenthal’s “blood pudding” comes to mind, not in any way like a boudin noir or morcilla, but an almost mousse-like confection that’s the result of blood and cream stirred for hours in a Thermomix—or it could actually be adobong kangkong or crispy pata, just excellently executed.

Well-appointed
This was what I had in mind when we dined at Rural Kitchen of Liliw, Laguna, on Palma Street in Poblacion —it’s just behind the original set of residential buildings that were first built by the Rockwell developers.

If you walk there from the residences you’ll pass the faux shack of Holy Carabao with its barnyard aesthetic. With a name like Rural Kitchen I was expecting something along those lines, perhaps not actually a thatched hut and clay pots over charcoal, but something a lot less elegant than the well-appointed dining room that we pulled up to.

As it turns out, this is the idea behind this establishment: to serve Filipino favorites but not in the sort of nativist or downmarket setting that you’d usually find it in. The items on the menu are, refreshingly, free from excessive and superfluous description.

We’ve become so used to
having a signature dish (aka “’yung bestseller namin”) that it was actually hard to choose. In the end we ordered our favorites—what we would have ordered at Café Juanita or, in a previous era, at Aristocrat.

The meal began, promisingly enough, with the salt-shaker-shaped bonete bread, warm, in a basket. I’m not a fan of Filipino soft breads that compress into a starchy layer when you bite into it but tradition must be respected, and this is the texture of traditional Pinoy bread—just the pressure of trying to spread the butter on it compresses it into a chapati.

I’m a pretty terrible marksman; I manage to put a neat little cluster about an inch away from the bull’s-eye. This is how I feel about the food at Rural Kitchen: It almost gets it, and gets tantalizingly close, but doesn’t quite hit the spot.

First impressions
The kare-kare was enticingly presented, with all the greens on top, but the oxtail could have used another boiling, and the sauce was too thick (it was not the graininess that was the problem—this I actually quite liked, and is a sign that the cook is not spooning Skippy into the pot).

The laing with kohol was a tinge too sweet, and the snails were chewy like little rubber bullets. The fish sinigang was correctly soured, but the miso came in a bit thick. And so on.

As with any negative review, I have to qualify that I’ve only been to the restaurant once and the chef could have been having an off day; and that you must not take my word for it—there are many reviews of this restaurant out there, almost all of them positive, so it’s very possible (actually, highly probable) there is something wrong with me. And in the end, the best person to make the judgment call is yourself.

I love the interiors, and the vibe in general. I also am a great fan of the idea that Filipino food can be served in a straightforward manner without recourse to ethnic weave and bamboo.

The best thing about Sandy Daza’s Wooden Spoon, for example, is that it feels like you’re eating home cooking—except that your cook is one of those amazing family kusinera who has mastered the Great Filipino Cookbook from cover to cover.

Rural Kitchen is not a bad one; it’s an almost-there one—the truly bad ones I don’t bother to write about. Dean & Deluca managed to go from being mediocre and overpriced to one of my favorite lunch spots in the neighborhood, over the course of two years.

What is needed here is much less drastic—just a bit of course-correction that can make these well-loved favorites sing. There’s no need for the chef to perform or adapt or twist or modernize or innovate; these are well-loved dishes for a reason.

With good ingredients, good technique and a whole lot of heart, Filipino home cooking can, and should, stand proud. I would like to believe that Rural Kitchen is a work in progress, and that they get to do what they set out to do very soon. –CONTRIBUTED