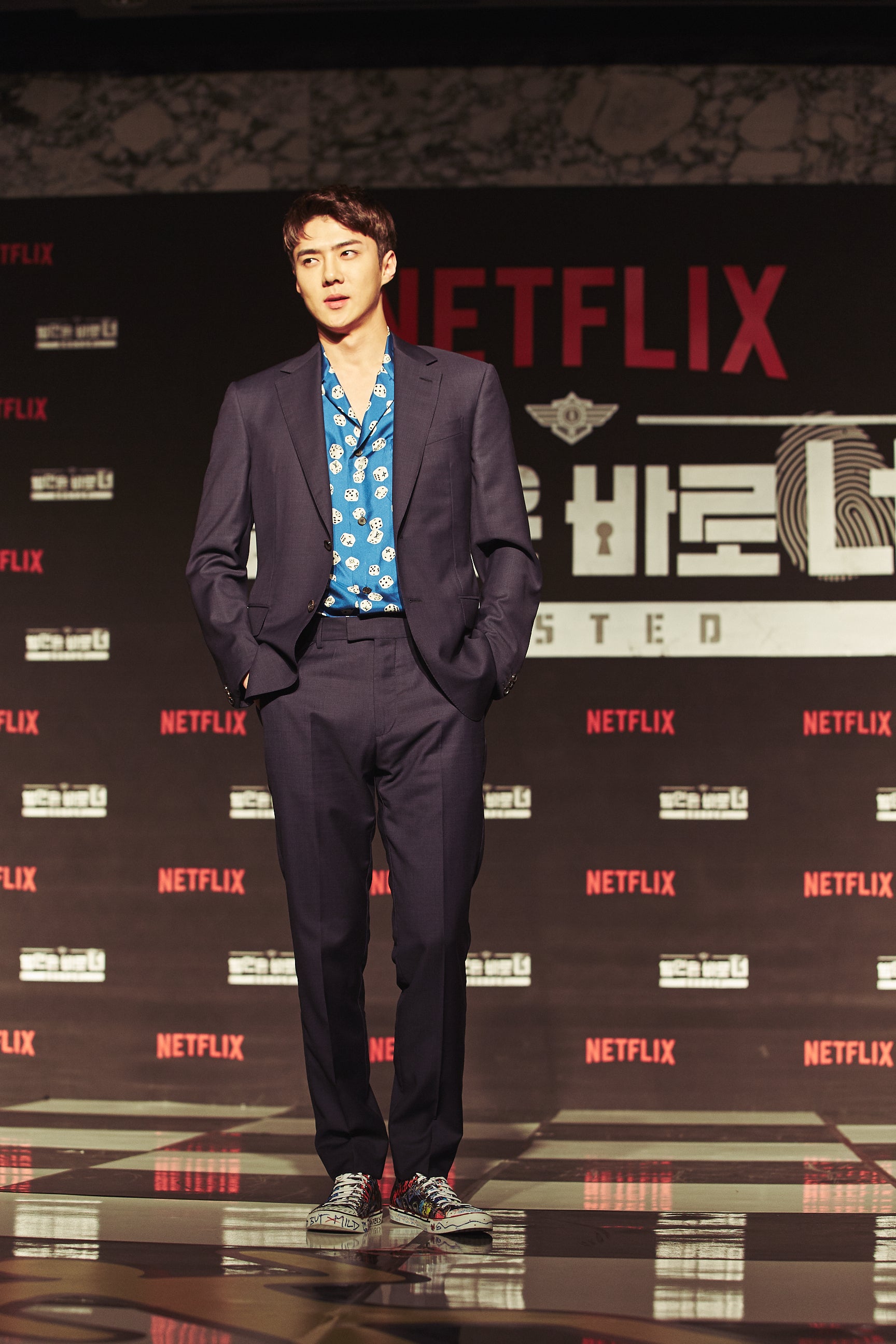 SEOUL, KOREA - APRIL 30: Sehun at the press conference for the first Korean unscripted Netflix series, Busted! I Know Who You Are on April 30 in Seoul, Korea. (Photo by Hunwoo Jang for Netflix)

The K-pop idol talked about his role as a dancing detective who solves (gasp) murder cases in Netflix’s first Korean variety show, “Busted.” And instead of playing sleuth with the EXO squad, Sehun worked with a motley crew of A-listers who are not exactly Sherlock Holmes either.

“Busted” is a 10-episode “murder game party”; it’s like a massive breakout room and the seven snoops are on the search for the culprit. They face obstacles, unlock doors, solve math problems—and it is hilarious.

“I have a strong desire to win,” the 24-year-old K-pop idol said of his strengths as a detective. Costar Se-jeong laughed and said Sehun is “energetic.”

We met the singer-dancer for the first time for a 10-minute roundtable interview earlier in the afternoon. He was in a two-piece suit and ocean blue silk with dice print and the ubiquitous Louis Vuitton monogram. If some random dude wore that top it would look tacky, but the guy sitting across us was not some random dude.

Up close, this dude looked like he stepped out of the TV screen. Sehun’s skin glowed, his eyebrows were on fleek—he looked like he’s been photoshopped to perfection.

Just two days ago he was in the Philippines for EXO’s second concert in the country. He instantly lit up and became more animated when this writer asked about the sold-out show.

“I love the experience,” he told Super. “It’s been a year since we had a concert in the Philippines and actually the (EXO) members love the Philippines. When we have a concert there we can directly feel the love the fans are giving us, so we get even more drawn to the country and the fans.”

During casting, it was rumored that EXO’s Suho is taking part in the Netflix variety show. “Busted” producer Kim Joo-hyung said otherwise, that it was just misinformation since their names are quite interchangeable.

The EXO maknae (youngest member of the group) admitted that he was nervous for his debut in the K-variety scene, but Suho (whose name means “guardian” in Korean) gave him a pep talk.

So did he charm his way to unlock doors? There’s only one way to find out.

“Busted” is now streaming on Netflix.