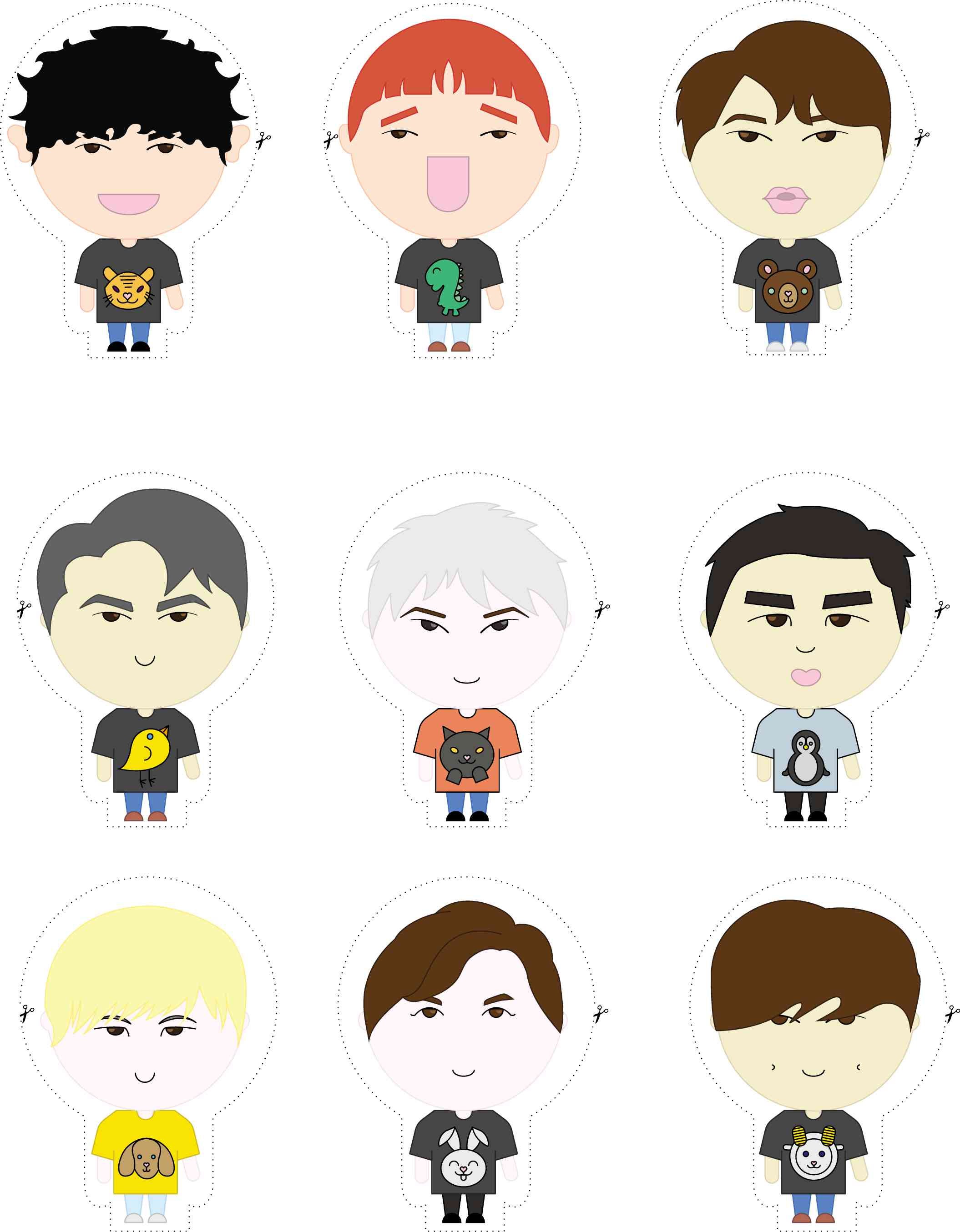 EXO is the South Korean boy group who produced the generation’s anthem, “Growl,” from their first full-length album “XOXO,” released in 2013.

But for those who are unfamiliar yet (WHY?) with them, here’s all you need to know about the nine members of the quadruple million-seller K-pop group.

Iconic line: “Saranghaja!” This translates to “Let’s love!” As the leader of EXO, this is what Suho says as a greeting either after accepting awards or performing in concerts.

What he’s up to now: Teasing us all while filming scenes as CEO Lee Yoo-chan in “Rich Man,” which premieres on May 9.

In the show “Exciting India,” it was revealed that Suho he used to be quite close to fellow SM Entertainment talent and SHINee member Choi Minho. They patched things up on the show and the visuals have never been more fine.

Iconic line: “Marshmallow~” Although Xiumin’s the oldest in the group, he can’t stop himself from being the cuddliest, especially during a scene in “EXO Showtime,” EXO’s reality show in 2014, where the members were freezing outdoors. To keep them warm, the staff handed them some hot chocolate with marshmallows, and Xiumin proceeded to sing in glee while sipping from his cup.

Secret talent: Super strength. In one of the episodes of “EXO Showtime,” Xiumin annihilates every member at arm wrestling and emerges as the champion.

What he’s up to now: Promoting EXO-CBX’s “Blooming Days” second mini album and preparing for their Japanese comeback album “Magic” with Chen and Baekhyun. Magic will be released on May 9 and EXO-CBX will begin their tour on May 11.

In the reality show, “It’s Dangerous Beyond the Blankets” he showed great rapport with Wanna One center Kang Daniel.

Iconic line: “Balance.” This has become an inside joke among EXO-Ls after watching “Idol Producer,” where Lay stands as the nation’s (strict) producer. In the Chinese reality show, Lay emphasizes the importance of balance for every dancer. This is his serious advice to the trainees, but it surprised him how much he actually said the word “balance” in the first episode alone—over 80 times!

What he’s up to now: It was announced last year that Lay will not be joining The ElyXiOn tour due to scheduling conflicts. However, China’s sheep is busy filming season 4 of “Go Fighting!”

Iconic line: “Kkaebsong!” or “That’s a pity!” This is a word he invented in “EXO Showtime” and eventually became his iconic line during concerts and shows.

Secret talent: Imitating other people, especially his co-members. There are multiple times Baekhyun has imitated his co-members’ mannerisms and dialogues, especially during concerts, talk shows and some moments in “EXO Showtime.”

What he’s up to now: Promoting EXO-CBX’s “Blooming Days” with Xiumin and Chen.

Iconic line: “Awae!” It has been an inside joke among EXO and EXO-Ls that Chen has a tendency to whine. But it’s in a good way, don’t worry! This actually made EXO-Ls love him even more.

Secret talent: Having a really loud voice. During their The ElyXiOn tour in Bangkok last month, Chen asked the entire audience to be completely quiet because he wanted to “try something.” To everyone’s surprise, he actually just wanted to yell really loud. He was successful in his findings.

What he’s up to now: Promoting EXO-CBX’s “Blooming Days” with Xiumin and Baekhyun.

Iconic line: “Chogiwa.” This is the opening line in one of EXO’s first songs, “Wolf.”

Secret talent: A pro-bowler. Chanyeol’s bowling skill is no joke. He even wears his own bowling gloves when playing. He recently participated in V Live’s “TVXQ vs EXO: Kingpin Match” with Chen and TVXQ’s Changmin and Yunho. EXO team lost, and bowling king Chanyeol’s frustration was very visible, but this only showed how determined he was to win. He bagged gold in the 2018 Idol Star Athletics Championships early this year with TraxX’s Jay.

What he’s up to now: EXO-Ls are anticipating the release of his spread and feature in TrendsHealth magazine this month. Chanyeol took on the “mother” role and surprised his brothers: He brought coffee for EXO-CBX before one of their comeback stage performances, and he even sent a coffee truck for Sehun and the rest of the cast of “Dokgo Rewind” while the latter was filming just this week.

Iconic line: Every English sentence he has ever spoken, and every English song he has ever performed. D.O. is known for his perfect English skills more than his signature death glare that he made especially for Chanyeol. Search “EXO cover Guilty + Nothing On You” on YouTube and let’s all swoon together.

Secret talent: Applying phone screen protectors. D.O. has proclaimed this himself in an episode of “Knowing Bros” last year when EXO was the special guest. During one of Baekhyun’s Instagram live broadcasts, D.O. unexpectedly came into his room just to apply his screen protector regardless of the thousands of people watching them both.

What he’s up to now: Making us all swoon while filming for “Hundred Days’ Husband,” wherein he takes on the role of Crown Prince Lee Yool. There has been no announcement yet about the series’ release date.

Iconic line: His laugh. Looking at his laughing photos and gifs is a 4D experience. Look up “170121 EXO—Animal sound full cut” on YouTube and skip to 6:00. You’re welcome.

Secret talent: “Aegyo.” Dancing god Kai may cringe at his own aegyo at times, but he’s admittedly exceptional at it. He even judges his co-members’ aegyo when they try so hard to do it. What a legend.

What he’s up to now: Killing us all with his superb acting skills in portraying messenger Ato in “The Miracle That We Met.” Kai’s 16-episode series began airing on April 2.

Iconic line: “Yehet!” This is another line popularized in “EXO Showtime.” This is Sehun’s version of “Yehey,” and thus says it every time he feels happy or excited.

Secret talent: Having wide shoulders. Sehun himself has recognized this “special skill” of his, which proved to be useful when he won a game of arcade basketball in “Knowing Bros.”

What he’s up to now: Making us all extremely proud as he just finished filming for the web movie “Dokgo Rewind” were he portrays the lead role of Kang Hyuk. This upcoming film has no announced release date yet as of writing. He is also busy promoting the Netflix K-variety show “Busted!”.