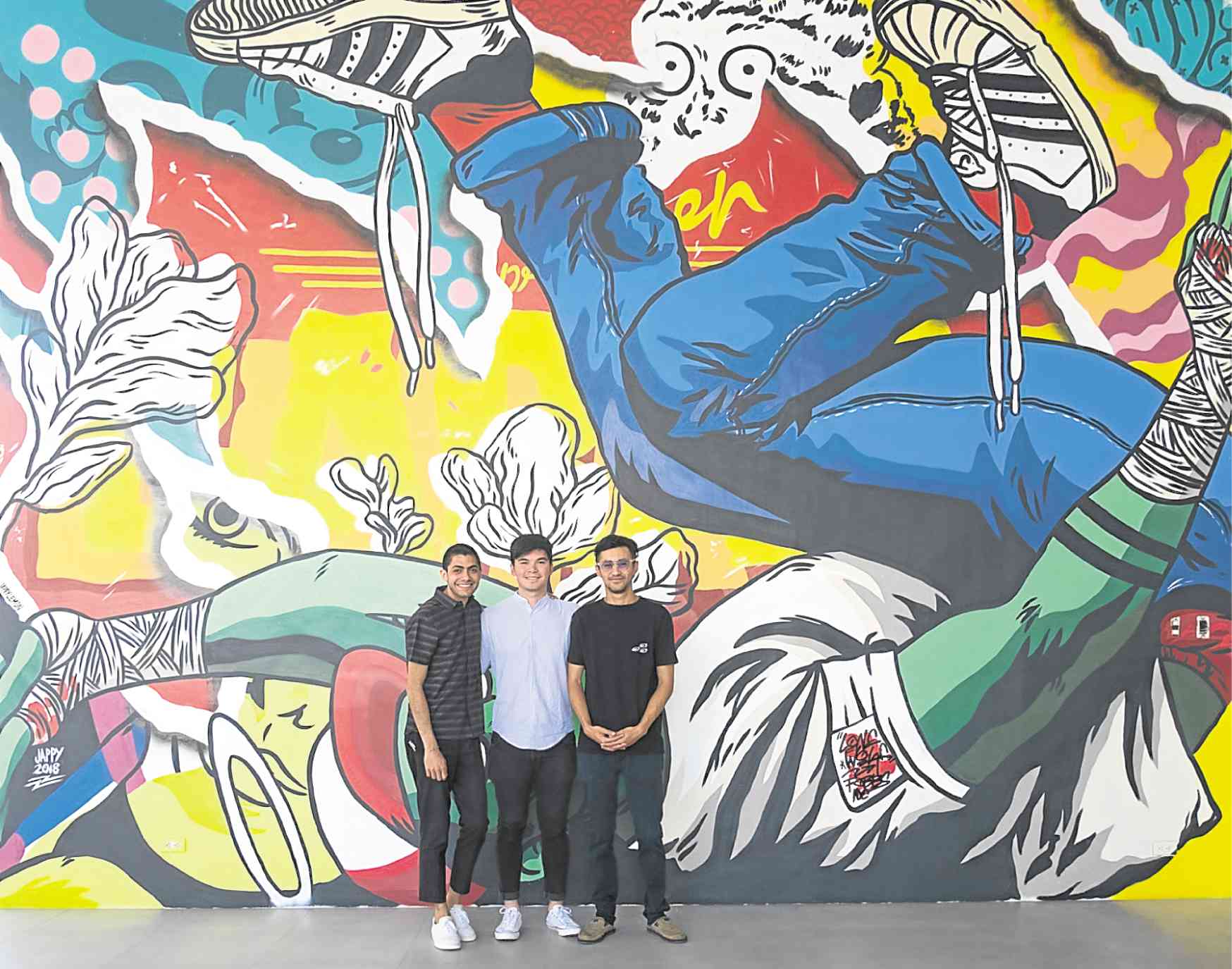 Dinesh Mohnani, Gio Panlilio and Enzo Razon of Tarzeer Pictures in front of a commissioned mural

Exhibit tackles the experience of traffic

Six months after staging his first solo exhibit, visual artist Enzo Razon is once again showing a collection of his works, but this time as part of a group show.

The venue on Chino Roces Avenue in Makati is easy to miss, as there are no directional signs save for the building number. It is also not visible from the street, a fact that Razon and his business partners are aware of and intend to address in succeeding shows. The group exhibit, “Barado,” is, after all, Tarzeer Pictures’ maiden venture.

“We got together and wondered, why not put up our own company?” Razon said in an interview with Lifestyle. All three are now based in Manila.

“For ‘Barado,’ we worked mainly with people we knew as well as with a handful of artists whose work we had only seen online. We reached out to them on Instagram, asked them if they were willing to join the exhibit,” Mohnani said.

The exhibit’s theme is one Filipinos are familiar with: traffic and its attendant woes like feeling cramped and boxed in. Participating artists Jappy Agoncillo, Jose Alvarez, Lakantula, Jacqueline Pisano, Jono Duran Pisano, Martin San Diego and Alex Westfall were asked to come up with images they felt captured that feeling.

Panlilio, a budding photographer, chose 10 images that show a slice of Philippine life—fishermen in the town of Currimao in Ilocos Norte hauling in the day’s catch, Holy Week flagellants, and a procession in Quiapo.

Homage to his nanny

For his collection, showcased in a tiny room accessible through a tiny entrance, Razon pays homage to his childhood nanny, Rose. At the tip of the pyramid-shaped installation artwork is her white uniform that Razon decorated with an oversized red rose patch. Below it is an abstract painting on a rectangular canvas.

“It’s really multiple roses that I painted layer by layer,” he said. Forming the base and spreading out toward the viewer are dozens of cans of corned beef, a pantry staple Rose would prepare for her ward.
“It’s still my favorite dish. I sometimes even used to eat it out of the can,” Razon said.

Projected over two still images on the adjacent wall is a video of some of his childhood doodles. The two images are of leafy trees and a cup of coffee.

Razon described this piece as an acknowledgement of his privileged background—living in a house surrounded by trees —as well as a visual childhood memory.

“One distinct memory is of my parents drinking coffee from cups with a blue camel design; we still have those cups at home. I remember thinking how much I wanted to grow up so I could also start drinking coffee,” he said.

Mohnani says that like paintings, photographs tell different stories depending on the viewer.

“We want to establish Tarzeer Pictures as a group that champions photography as an art form, one that is worth collecting,” he said. He is aware that it might take a while for collectors to cozy up to the idea, especially since Tarzeer is a fledgling group, but all three are willing to wait it out.

“Few know that printing pictures on a large-scale format is a complex process. For the images to last and not fade or warp, they should be properly processed and framed,” Mohani said.