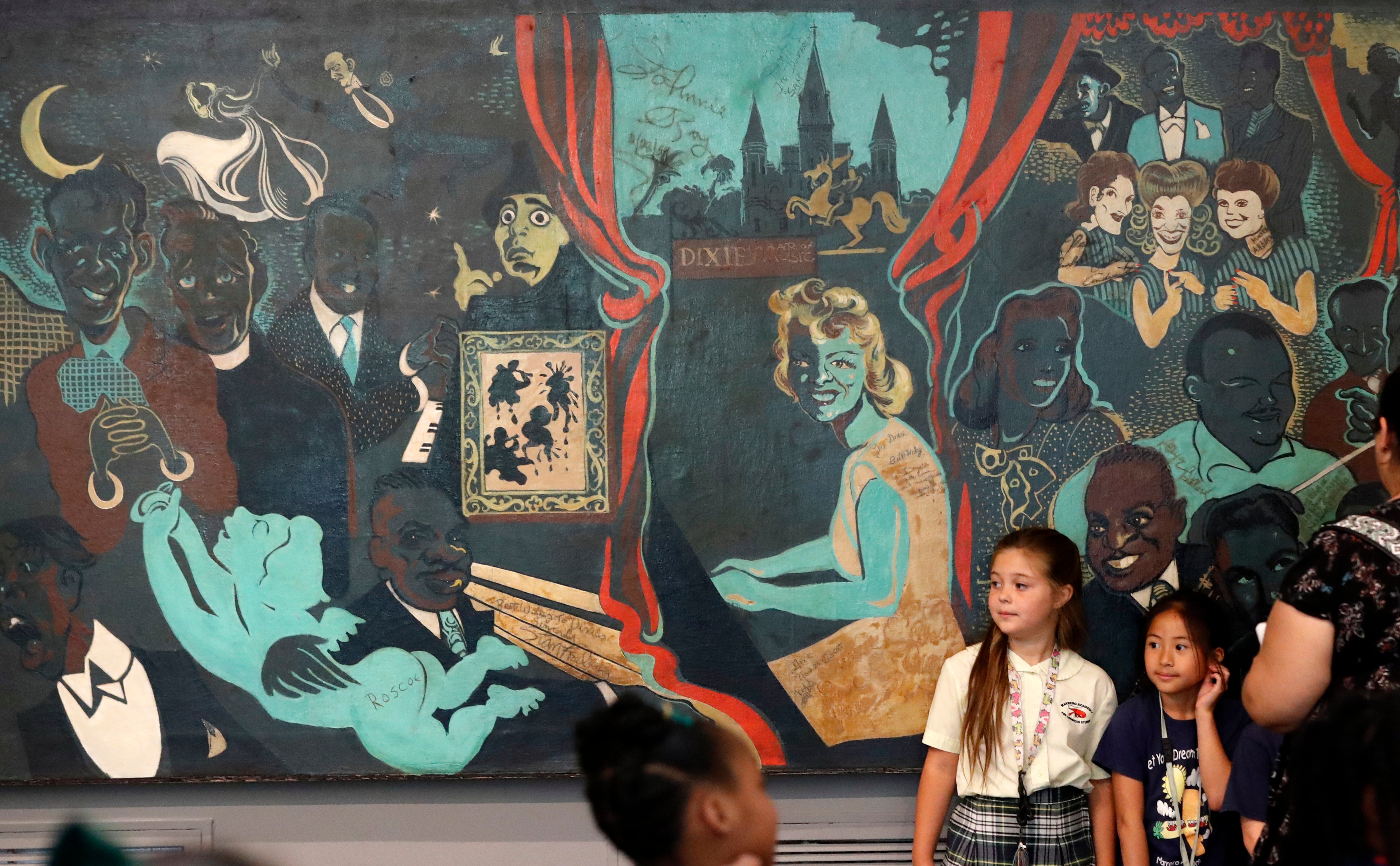 Visitors pose for photos in front of the oil on canvas painting Dixie's Bar of Music at the New Orleans Jazz Museum in New Orleans, Thursday, May 10, 2018. The 29-foot-long painting that caricatures more than 60 musical celebrities of the 1940s is back in a New Orleans museum. The painting covered a wall at Dixie's Bar of Music, a haven for gays during a homophobic era. It's been in storage since 2005's Hurricane Katrina but is now the focus of a new display at the museum in the Old U.S. Mint. Image: AP/Gerald Herbert

NEW ORLEANS (AP) — A mural that covered the wall of a pioneering New Orleans bar is back on display for the first time since Hurricane Katrina.

The 29-foot-long (9-meter-long) painting, which caricatures more than 60 musical celebrities of the 1940s, once covered a wall at Dixie’s Bar of Music, an early haven for gay patrons in the city. It’s by Xavier Gonzalez , whose work has been collected by major art museums including the Metropolitan Museum of Art in New York.

Curators are celebrating with music Friday evening in the New Orleans Jazz Museum, where the painting is being shown along with the clarinet played by bar owner and bandleader Yvonne “Dixie” Fasnacht, who lived to be 101, and other mementos of the club.

Among the largest likenesses is jazz pianist Dorothy Sloop, whose nickname is said to have inspired Ohio’s state rock song — the 1960s hit “Hang on, Sloopy”, said David Kunian, music curator for the Louisiana State Museum and curator of the jazz museum. Painted just as large is movie star Dorothy Lamour, wearing a sarong and standing hipshot near singer Paul Robeson, who is shown in the epauletted uniform he wore for the movie “The Emperor Jones”.

The painting was autographed by some of its subjects, including members of the Andrews Sisters group and singer Johnnie Ray.

Wayne Phillips, another Louisiana State Museum curator, said Fasnacht apparently commissioned the painting soon after she opened the bar on St. Charles Ave. in 1939, since an October 1940 newspaper ad for the bar touted Gonzalez’ “clever mural caricatures.” The bar moved to Bourbon Street a decade later.

Police never raided Dixie’s, but when the city’s first gay Carnival ball was raided in 1962, “the story is that Miss Dixie just grabbed handfuls of cash from the cash register and went and bailed everybody out,” Phillips said.

Fasnacht didn’t advertise Dixie’s as a gay bar but it was known to be gay-friendly, her friend Peter Patout told NOLA.com’s The Times-Picayune in an interview for her obituary in 2011.

“It was more a social center than it was a pickup bar,” patron and former Times-Picayune critic Frank Gagnard told the newspaper. “It was where gay people went to meet friends.”

Fasnacht sold the bar in 1964 and donated the painting to the museum in 1978.

The jazz museum was damaged by Hurricane Katrina in 2005, and reopened about a year ago. The painting, undamaged by the storm, was quickly moved from a second-floor lobby wall to storage and rolled onto a cylinder.

Once unrolled, it had to re-stretched, retouched to fix cracks and flaking, and varnished — a $10,000 job. A museum patron donated the money.

Although museum records describe the painting as 35 feet (nearly 11 meters) long, it turned out to be 29 feet when measured, Kunian said.

The museum still has a Dixie’s mural mystery, Phillips said. He said two photos, one of them donated by Fasnacht’s family, show a painting behind a bar, but also in Gonzalez’ style. Nobody knows which of the two bars it was in, let alone what happened to it.

“I’ve never seen any mention of another mural, even in coverage of Xavier Gonzalez and his work,” Phillips said. CC

MMDA’s new pitch for Pasig ferry: Art along the riverbank