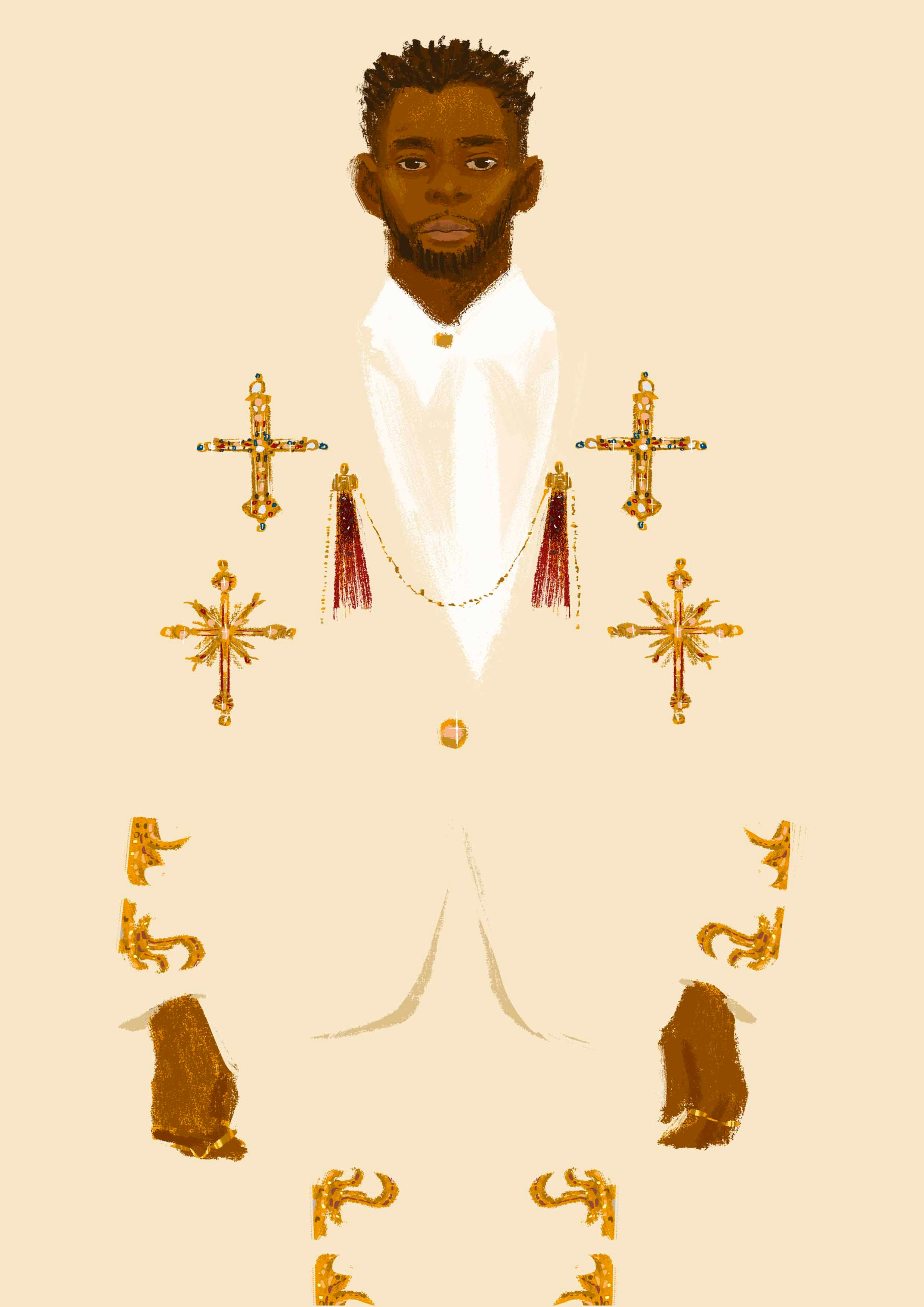 Although a Film major at the University of the Philippines in Diliman, Dormiendo got into visual art, out of which she rendered vibrant portrayals of people in fashion and pop culture.

She went on to create fan art from the “Heavenly Bodies” show.

Her creations—from Rihanna’s nun’s habit-inspired dress by Margiela, to Zendaya’s adaptation of Joan of Arc, to Black Panther’s Chadwick Boseman’s priestly garb by Versace—drew 100,000 likes on her Twitter account (@baasamas).

How did you get into art?

I’ve always liked drawing. I remember making little comics when I was a kid. I didn’t think about pursuing it seriously, though. I don’t remember competing in art contests and stuff at school. I thought I was above average, at best. I was just a kid who knew how to draw when it’s convenient.

What inspires you to make art from fashion?

On illustrating fashion, I have always taken inspiration from the works of Rene Gruau and Coles Phillips. Having strong silhouettes is key. In some of these MET Gala drawings specifically, I used the “fade-away” style that Phillips popularized. I read somewhere that he devised it to save on ink. In my case, it’s time that I save when drawing in this style, which was why I was able to make them quickly. In addition, with this year’s theme, and my being exposed to Catholic aesthetics at a young age, I couldn’t help but have a kind of creative adrenaline rush.

Tell us about your style.

Honestly I didn’t realize I had a style until people started pointing it out. I feel like I’m perpetually in the process of figuring it out. I just try to draw a good picture in the easiest, most enjoyable process. I was terrible at line art, so I did away with it.

I don’t like dwelling too much on details, so I go for a textured look that has an undone feel. So, really, I just drew a lot, understood what my strengths and weaknesses are, and then adapted.

How long does it usually take you to produce an artwork?

The drawing process itself can be as quick as 30 minutes. It’s the conceptualization part that takes time.

How do you take people’s positive or negative comments about your work?

I’m not good at accepting compliments, but I try to thank everyone, or at least show that I’ve acknowledged them. As for negative comments, when someone (usually anonymously) sends me a message that my work sucks, then that speaks of their character and how their opinion is not something that I have to win over.

What advice would you give people, especially young artists, who are pursuing your kind of art?

What art advice hasn’t already been said? Study a lot, practice, hydrate, etc. Also indulge in feeling good with what you accomplish. It’s easy to be critical of yourself, which is fine because it grounds you and makes you strive to improve. But you should also take some time to be proud of the result of your hard work.

Is there anything you would like to say as a shout-out to anyone?

Be kind to everyone—yourself included. Also, stop littering, you uglies.