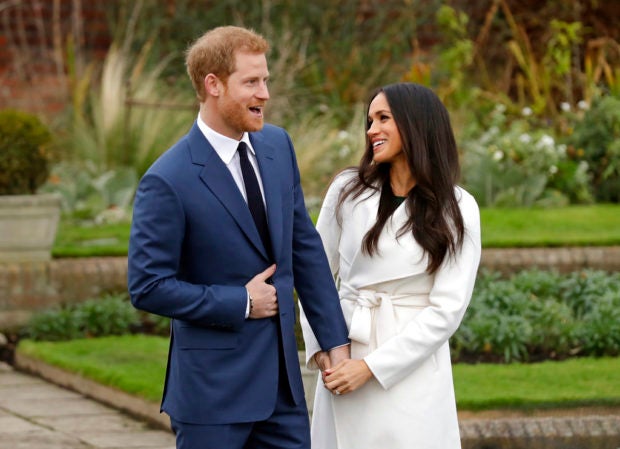 In this file photo dated Monday Nov. 27, 2017, Britain's Prince Harry and fiancee Meghan Markle pose for photographers during a photocall in the grounds of Kensington Palace in London, marking the couple's engagement to marry. Now with only a week until the May 19 wedding of Prince Harry and Meghan Markle, a party atmosphere is developing in the English city of Windsor, with tens of thousands of visitors expected in the city on the couple’s wedding day. Image: AP/Matt Dunham

WINDSOR, England — Few towns are as quintessentially English as Windsor, the bucolic riverside locale where Prince Harry and American actress Meghan Markle will get married on May 19.

And few towns are as pleasing when a warm spring sun bakes off the morning mist. Even the plump white swans on the Thames River seem relieved that the winter is over.

Most of the swans belong to Queen Elizabeth II and must be counted each year by Her Majesty’s Swan Marker, a ritual that reflects the dominant role the Windsors play in the town whose name the royal family adopted as a surname a century ago.

All roads seem to lead to Windsor Castle, a magnificent fortress perched high on a hill topped by the royal standard when the queen is in residence. It is here — a favored royal playground since William the Conqueror built the first structure in 1070 — that the royal wedding will take place.

Fevered preparations are underway: Many roads have been repaved, street signs are being repainted, storefronts are decked out with life-size cutouts of Harry and Markle and shoppers are being lured by souvenirs of all kinds.

Windsor is getting a bit of a makeover, just like the monarchy, which is rebranding itself with attention focused on the new, younger generation of princes as the 92-year-old queen slowly reduces her public duties.

“Everything is now in place, we’re 99.9 percent of the way there,” said town councilor Phillip Bicknell, who expects more than 100,000 people on the royal wedding day if the weather is good. “We believe this is going to be the biggest number of people fitting into Windsor for any event. It’s going to be quite tight, but the atmosphere will be electric.”

There’s already a party feel in Windsor well in advance of the actual party. Tourists from around the world arrive daily by train and walk through the royal shopping arcade to the castle. No one, it seems, can resist the impulse to take a selfie in front of the castle.

The royal wedding itself is a party on a grand scale, with 600 guests invited to the ceremony in St. George’s Chapel, another 2,640 invited to the castle’s grounds, and tens of thousands more expected to throng the town’s narrow streets hoping for a glimpse of the newlyweds.

Security barriers are being put in place and an elaborate police deployment plan has been mapped out. It’s fairly easy to establish a secure perimeter around the castle grounds, and a no-fly, no-drone zone will be enforced to keep the airspace clear. Still, Harry and Meghan are determined to ride outside the castle in an open horse-drawn carriage, which calls for extra protective measures.

Police are using an automatic license plate recognition system to flag any known suspicious vehicles. Many roads into the town center will be blocked off to lessen the chances of a vehicle attack on the huge crowds expected at the foot of the castle.

Police with automatic weapons can already be seen on the streets of Windsor, a jarring fact reflecting that Britain’s official terrorism threat level is set at “severe,” indicating an attack is judged highly likely.

Before the spate of extremist attacks on Britain last year, it was common to see some royals in the streets and in the park surrounding the town. When the queen was younger it wasn’t unusual to see her on horseback, walking through a park, or driving her Jaguar through the narrow streets.

That happens less frequently now, but the royal presence still permeates Windsor. Many are excited about the mantle being handed to Harry and older brother Prince William.

“You’ll see them about now and again,” says Dean Wright, an artist at the darkened Rogue Tattoo Windsor studio.

“You’ll see the Duke of Edinburgh (the queen’s husband, also known as Prince Philip) riding in a carriage in the morning. I’ve seen her go by in a convertible, a nice one. The royals are popular. With the princes becoming more public, the people really like them.”

Wright has had a surge in demand for tattoos with traditional British themes: the castle, the crown, the London skyline — and a profile of the queen’s face lit with the famous David Bowie lightning flash.

“The wedding will make us busier for sure,” he said of Windsor’s business community. “It will definitely bring more people in. Everyone wants to get involved.”

Vijay Kapur, the manager of the nearby Havana House cigar emporium, is less certain. He fears extra security, road closures and big crowds may keep real shoppers at bay. But he knows the long-term benefit of having a major royal event in the heart of Windsor.

He’s offering two cigars — a Romeo and Julieta, for its romantic connotations, and a Rocky Patel Royale, because it has royal in the name — packaged with a cigar cutter and cigar matches in a special royal wedding gift box. But he’s not expecting a crush of buyers.

“Some businesses may suffer if the road to their stall is closed that day, but I think the royal presence is great,” Kapur said. “It adds to the aura of the town, especially the castle. You can absorb and feel the culture and the tradition and the history. It puts the town on the map.” MKH