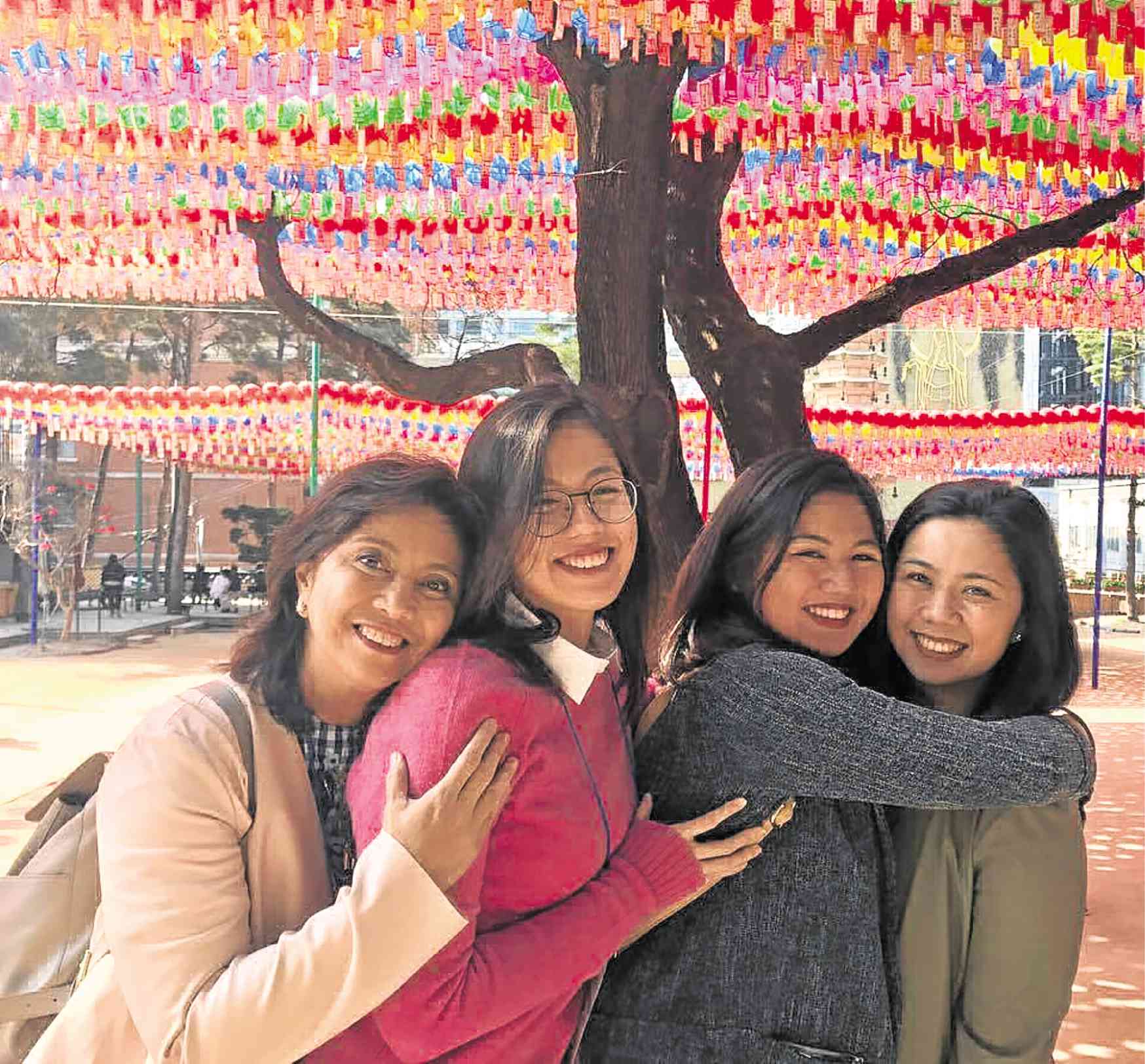 Vice President Leni Robredo (far left) and her daughters, Tricia, Jillian and Aika, on a rare vacation abroad in 2017

Why Leni Robredo believes in ‘tough love’ for her daughters

Leni Robredo will tell you that it’s a lot easier to be a mother than to be Vice President of the country.

“As a mother, you get to have control over some things. You can see the fruits of the time you invested in your children and the lessons in discipline that you instilled in them. You will reap those,” Robredo tells Inquirer Lifestyle for this Mother’s Day interview.

We’re in her small office  filled with reminders of her late husband, Jesse—a painting of the couple, framed family photos, and a pair of colorful miniature ceramic slippers on her table, a reminder of Jesse’s people-centered tsinelas leadership.

Mrs. Robredo ponders the joys of motherhood while being the besieged Vice President for the last 22 months.

As Aika, Robredo’s “co-parent,” wraps up her yearlong masters program at the Harvard Kennedy School, Tricia makes sure the bills are paid, while Jillian lists down what they need at home and goes to the grocery herself.

The last few days of May are very important to Robredo. It’s Aika’s graduation on May 24. Tricia will have her coating ceremony, marking her entry into senior year in medical school, on May 26. Jillian will graduate from the Philippine Science High School on June 1.

Jillian, who remains a big KathNiel fan, had just been accepted into the math and science programs of leading universities here and abroad. At New York University (NYU), Jillian got into its BioMolecular Science Program of the Tandon School of Engineering.

NYU wasn’t in Jillian’s original plans, Robredo says. She took the SAT only because her classmates did.  She was “enticed” to take the NYU admissions after she got a perfect score of 800 in the test’s Math section.

While NYU is an exciting prospect, the school costs an arm and a leg. Jillian has a partial scholarship and by herself, found a job as a laboratory assistant in the school’s science department to help defray expenses. But she has told her mother she would pursue NYU only if she gets a full scholarship.

Robredo couldn’t be any prouder of her daughters, who lovingly call her their “cool tiger mom.”

“She still constantly monitors and asks about our days  and the different things we’re involved in,” Tricia says. “She puts a lot of trust in us but expects, and sees to it, that we excel in whatever it is we choose to do. She’s chill but she’s also strict, if that makes sense.”

Robredo says her daughters are “used to hard work. They know that you have to earn everything, that there is no free lunch.”

In an e-mail to Lifestyle, Aika says of her Mama: “As we were growing up, her quiet and constant presence was always reassuring and gave us the much-needed support, confidence and encouragement, and sometimes, tough love.”

Robredo says part of that tough love is her belief in not overextending emotional moments.

“Our fortitude increased a thousandfold after my husband died, “ she recalls. “My instinct as a mother was to put up a brave front before the children. They were all daddy’s girls. I thought that time that any sign of weakness on my part would crush them. My daughters call it tough love, when I remind them to keep their emotions in check. I tell them, ‘We can’t do anything anymore, and it would be the wish of your dad for us to move forward.”

She admits some parents might not agree with her way of coping, but Robredo says she can now see the benefits of such tough love, of allowing the girls to cry over their father but not letting their grief linger too much.

“I think if I hadn’t done this, my daughters might not have been this good at handling the changes that came our way. To a certain extent, I tell myself I did the right thing. I don’t know if I am just reassuring myself whenever I see how difficult our situation is now. I tell myself I made the right decision in forcing them to be strong,” Robredo says.

The girls are bravely facing the vicious attacks by their mother’s political opponents.

“How do I love thee? Let me (re)count the ways,” Tricia tweeted on her mother’s birthday on April 23.

They were happy that their mother decided to finally fight  fake news by calling these out and setting the record straight.

When fake news about her began to spread, Robredo’s daughters had wanted her “to set the record straight” immediately.

“I was wrong to have ignored fake news,” the Vice President says. “It’s my obligation not just to myself but to the people, to let them know that what they read is not true.”

Robredo doesn’t impose rules on the girls’ social media use, other than to remind them to be responsible when they post since whatever they say will be magnified by others.

Their unfiltered posts give the public a glimpse into their private lives and personal convictions.

In their birthday greetings to Robredo, Jillian advises her mom to go slow in using Facebook and playing Wordscapes. Tricia reveals that she is into essential oils, and Aika casually talks about cleaning their condo in Quezon City.

Robredo chuckles when the matter of her obsessive-compulsive (OC) cleaning and organizing was brought up. Cleaning the house is her way of de-stressing.

“When mama has a free day, which is rare, she likes cleaning the entire house. She buys different kinds of containers, organizers and boxes for different things. She labels them with her label maker,” Jillian says.

The girls say their mother’s pet peeve is “anything messy and disorganized.”

“She always makes us fix our things if they’re untidy. She also makes it a point to do everything that needs to be done right away. So, if she sees me being chill, despite the schoolwork, she always bugs me about it,” Jillian adds.

Tricia says her mother gets “annoyed” when she fails to prepare her things for school for the next day. Robredo says her daughters get irritated when she cleans their room and they can no longer find their things because she put them away.

But they rarely fight. Their bond as mother-daughters-sisters is enviably tight.

Their family chat thread is busy every day with conversations about anything under the sun, that Tricia says “you cannot not check your phone every hour or it will be clogged with notifications because our thread is that active.”

Jesse may have been gone for almost six years, but his memory and influence on his girls are unmistakable. His absence remains raw in their hearts.

Robredo says it took her almost three years before she mustered the courage to watch her husband’s videos. But their daughters still cannot bear hearing his voice because they miss him so much, she says. All Robredo girls wear identical necklaces that contain Jesse’s ashes.

The Vice President recently posted a picture of herself sitting beside a life-size sculpture of her husband outside the Jesse Robredo Museum in Naga City, built by the National Historical Commission. “Finally had him all to myself again,” Robredo wrote.

There is a hallway in the museum that shows the plane crash on Aug. 18, 2012 that claimed Jesse’s life. Everyone has to pass through it to get to other galleries of the museum. The girls cover their eyes and walk fast whenever they pass through it, not wanting to be reminded of that tragic day.

Had Jesse been alive, Robredo says her job as Vice President would be easier because she could talk to him at the end of the day, or he could take care of the parental duties if she’s stuck at work—much the same way she would when he was Naga mayor and later, Interior Secretary.

The Robredo girls are undaunted by the electoral protest filed by Ferdinand “Bongbong” Marcos Jr.

“As far as we’re all concerned, there’s nothing to fear because our conscience is clean. And if there’s anything about my mom that I really love, she has a very strong faith. Lagi siyang naniniwala na hindi naman kami pababayaan,” Tricia says.

Aika adds that her mother handles the situation “the way she handles everything else.

“Head down, power through, continue working and being productive. I don’t think she ever gets rattled, especially when her intentions are pure and truth is on her side,” says Aika, who will come home from Harvard in time for Jillian’s graduation.

When asked what their mama cannot live without, Robredo’s daughters say: “Us!”