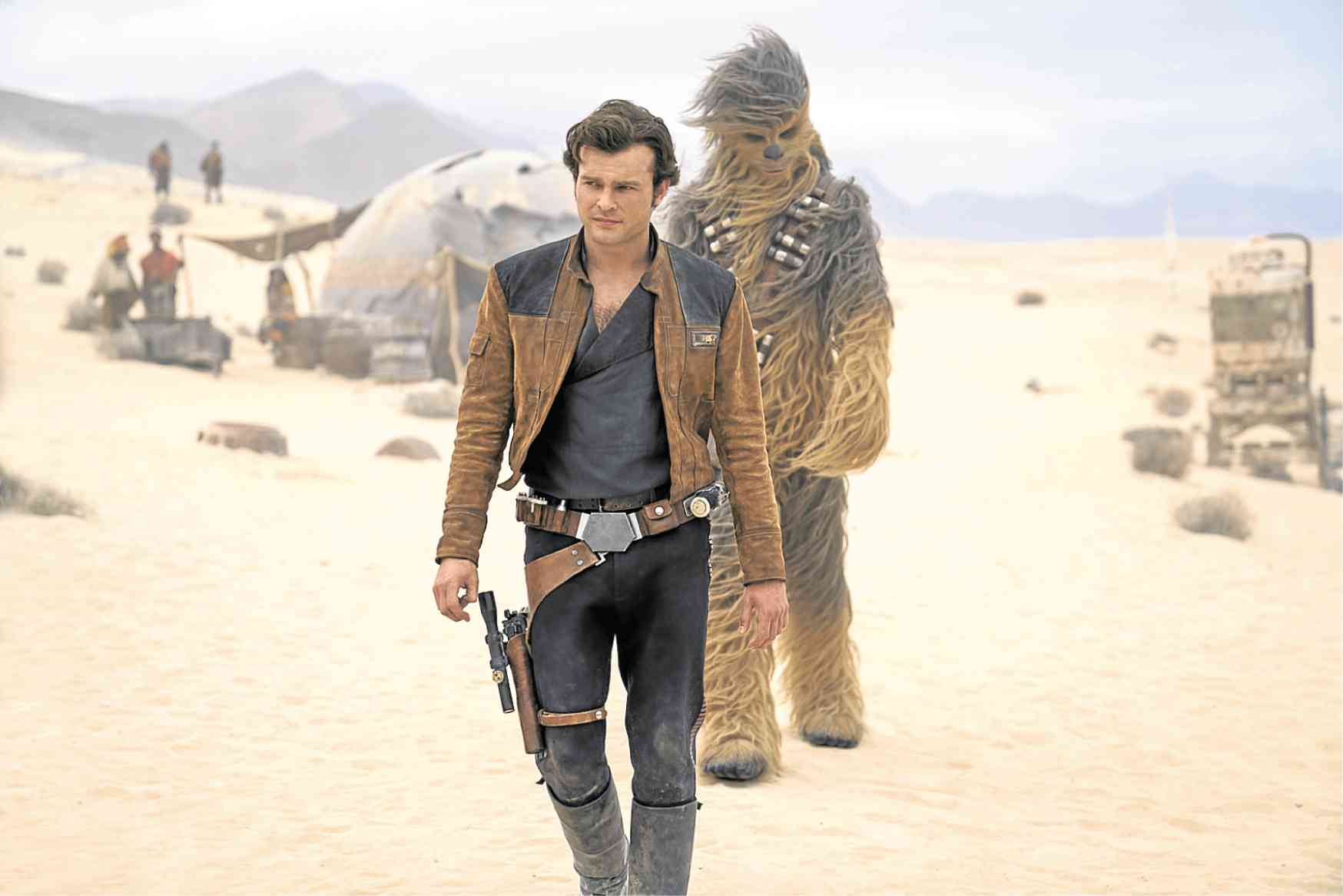 Alden Ehrenreich as Han Solo and Joonas Suotamo as Chewbacca

Is “Star Wars” more potent as a story or as a setting? This is an important question because the franchise has been expanding like a galaxy of its own since “Star Wars: Episode IV—A New Hope” premiered in 1977. The Skywalker saga has been explored through four decades and, currently, eight episodes: Episode IX arrives in 2019.

In 2016, Lucasfilm did something very different with “Rogue One: A Star Wars Story.” The first of what is envisioned to be a series of standalone “anthology” films, “Rogue One” featured events that occurred between two episodes and mined what was essentially “Star Wars” minutiae: How did the Death Star come to have such a weakness.

“Solo: A Star Wars Story” is the second such anthology film, and is the 10th “Star Wars” live-action feature film, its events occurring between “Star Wars: Episode III—The Revenge of the Sith” and “Rogue One. More significantly, “Solo” presents itself as the definitive origin story of one of the true “Star Wars” icons—Harrison Ford’s Han Solo.

This is a challenge because movie viewers already have such a complete idea of Han: Corellian smuggler with a price on his head, crack pilot of the YT-1300f freighter Millennium Falcon who did the Kessel Run in 12 parsecs, co-pilot of the Wookiee Chewbacca, criminal with a heart of shiny galactic credits.

The task of portraying a young Han falls to relative newcomer Alden Ehrenreich (“Hail, Caesar!”), who manages to conjure Han’s smirk and bravado. His Han is a much more optimistic and gullible Han than Ford’s hard-driven, jaded older version. Ehrenreich does well as a winning presence who’s on screen almost the entirety of the film. He’s someone who doesn’t know all the tricks yet but is getting there. Another actor who must take on an iconic role is Finnish actor Joonas Suotamo, who is playing Chewbacca for the second time instead of original actor Peter Mayhew.

Han grows up as a petty criminal on the streets of Corellia but after an abortive attempt at becoming an Imperial pilot, falls in with the master criminal Tobias Beckett (crafty Woody Harrelson) as they try to pull off a dangerous heist for Dryden Vos (a scarred, glowering Paul Bettany), leader of the intergalactic criminal organization Crimson Dawn. This heist is complicated by the presence of Han’s childhood sweetheart Qi’ra (the ever stunning Emilia Clarke from “Game of Thrones”), now Dryden’s top lieutenant. Suffice to say, the heist doesn’t quite go the way it’s supposed to.

There are two standout performances that just jump out at you in solo. “Star Wars” has always done its droids right (most notably Anthony Daniels’ C-3PO and Alan Tudyk’s K-2SO). In “Solo,” the star droid is L3-37 (L3 for short, voiced by British actress Phoebe Waller-Bridge).

The most scene-stealing performance is that of Donald Glover—Childish Gambino himself—as Lando Calrissian. All charisma and swag, Glover truly exemplifies a younger but already hustling version of the character originated by Billy Dee Williams. In particular, Glover’s intonation and pitch are perfect; he truly sounds like the OG Lando, complete with capes and tricks. Not for nothing is Lucasfilm now pondering a spinoff Lando film as another anthology movie.

There’s nothing original or particularly revelatory about “Solo.” We don’t really get to know why Han is the way he is, but we do get the how. Directed by the proficient and professional Ron Howard, “Solo” is a proficient and professional film. It’s a thrilling heist film, though quite linear and the most conventional of all the “Star Wars” films.

With cinematography by Bradford Young (“Selma” and “Arrival”) and editing by Pietro Scalia (“Gladiator” and “The Martian,” it really works as a slick, sleek space-set crime thriller, with or without the “Star Wars” trappings.

Seek and you shall find. One of the best parts of the film is the beginning of the enduring and unlikely friendship between Han and Chewie.

“Solo” gets the most important part done: Getting Solo from the streets of Corellia to the dunes of Tatooine, hinting at the possibilities that are to come with the coming events of “A New Hope.” There is just so much here for dyed-in-the-wool “Star Wars” fans to feast on with intergalactic East Eggs port side and starboard.

With its chronicling of the various criminal activities, personalities and organizations in the universe, “Solo” is the “Star Wars” crime film, down to the tropes and archetypes. Solo is the rogue, Chewie is the muscle, Qi’ra is the femme, and so on. Would have been nice to get a bounty hunter or two in there. Think of the possibilities for other genre films within the “Star Wars” universe. How about a “Star Wars” horror film?

A fun, rousing space crime film on its own, “Solo: A Star Wars Story” presents a welcome visit to a different time but still in a galaxy far, far away, filling in more of that ever-expanding franchise universe and pointing the spotlight at one of the franchise’s most beloved characters.

Lucasfilm’s “Solo: A Star Wars Story” opens in cinemas on May 23.