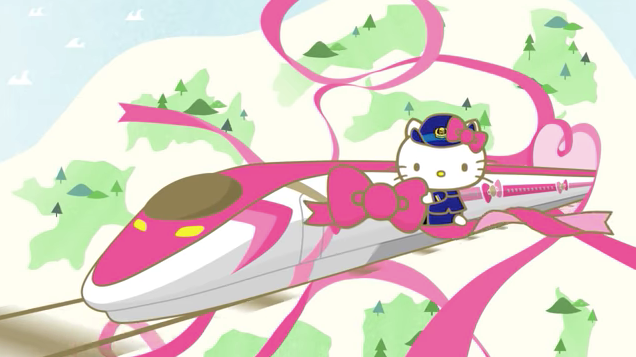 Everyone’s favorite Sanrio character will be charming commuters next month, as the West Japan Railway Co. announced last Friday that a Hello Kitty-themed bullet train will begin its operations by June 30.

The high-speed, 500-series Shinkansen will be used for daily trips between Shin-Osaka Station in Osaka Prefecture and Hakata in Fukuoka Prefecture, as per the railway operator via The Japan Times on May 18.

Staying true to Hello Kitty’s playful and signature bubblegum pink color, the train will feature a pink-ribbon design in its exterior, as well as illustrations of the Hello Kitty character by its doors. The train will have pink floors and pink armrests, as well as logos of Hello Kitty on the headrests. Commuters will also have a chance to pose for photos with a giant Hello Kitty doll.

This is the first ever Hello Kitty train of the railway company, and will be used to promote the local tourism and specialty goods of Japan. The Hello Kitty train is dubbed as “Hello! Plaza” and will be introducing passengers to areas for a limited period time, such as the Tottori and Shimane prefectures.

Prior to the unveiling of the Hello Kitty bullet train, the same railway company just lately finished the operation of a train that was inspired by the anime “Evangelion.” The said train featured a purple-and-green color scheme, and seemed to have drawn inspiration from the EVA Unit-01, the robot in the series.  Cody Cepeda /ra

Meet the friends of Hello Kitty