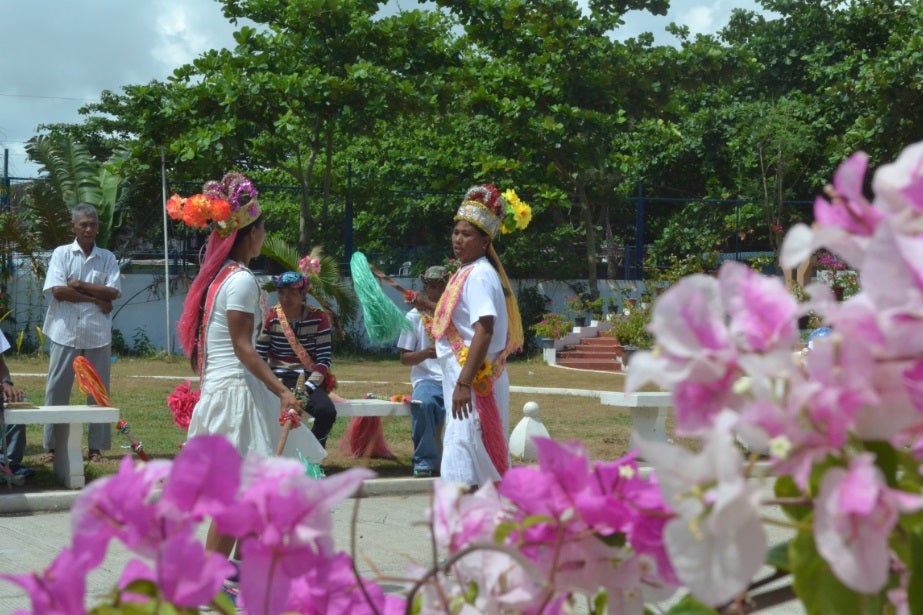 Exclusively performed only during barangay fiestas every June and October, locals of Fuga Island in Aparri, Cagayan recently staged their age-old version of the komedya in the Aparri mainland, the first time it was performed outside of the privately owned island located two hours off the coast of Claveria town.

The rare two-day affair was held in the town’s church grounds on the eve and feast day of patron saint San Pedro Telmo. Fuga folks played excerpts of their “Komedya de Isla Fuga,” which would normally last for 24 hours.

Also on the eve of the fiesta, Fuga women perform “Plantinos,” a religious practice, a form of communal prayer by women enacting their struggles when they lost their husbands and male relatives in war.

The early morning fiesta procession in the poblacion also saw the locals performing Komedya fight scenes in a number of stops.

Organized by the town’s parish priest Fr. Manuel Catral, the staging of both the Komedya and the Plantinos sought to promote the cultural heritage of Fuga and tighten the bond between Aparri and residents of the island.

Theater scholar Nicanor Tiongson wrote in the 1994 Cultural Center of the Philippines Encyclopedia of Philippine Arts that a komedya is “a play in verse which may dramatize actual events, the lives of saints or stories about Christian and/or Moorish royalty in the Medieval Kingdoms of Europe, Africa, and the Middle East.”

It was introduced by the Spaniards in the late 16th century with the first play being mounted in Cebu in 1598.

It has since spread across the country and called in various names such as curaldal and cumidya in Pampanga, kuleleng in Isabela, and hadi-hadi in Leyte.

In Fuga Island, Ronel de la Cruz notes in his book “Isla Fuga: Sacred Scapes,” the komedya was introduced in 1940 by a resident named Agapito Bagabag Sr., who was just a student in Aparri.

De la Cruz explains that the Fuga komedya is all about the Christian-Muslim wars of Medieval Europe with a romantic touch.

The tale of love between a Christian princess and a Muslim prince, he notes “evolved into a unique, localized cultural play and religious ceremony” which uses real bolos and swords.

Church historian Regalado Trota José, who visited the island last October and facilitated the documentation of the recent event in Aparri by the National Commission for Culture and the Arts (NCCA), said he has not seen such kind of a komedya before.

José, also an anthropologist, said Fuga’s version was “in its purest form” and unlike any other komedya that he had seen which were “manicured.”

He added that although the drama form was introduced in the island during the American period, the movements were “frozen in time,” suggesting antiquity, possibly dating back to the Spanish period.

Although nearer to the coast of Claveria, which is two hours by land from Aparri, Fuga falls under the jurisdiction of the latter.

José notes in his recent article on the Philippiniana Sacra journal of the Ecclesiastical Faculties of the University of Santo Tomas that Fuga, which form part of the Babuyanes (Babuyan group of islands), became a Dominican mission house in 1626.

He also noted that Fuga’s church complex, which is now in ruins, was constructed in the first half of that century.

Dedicated to Santa Ursula and the 11,000 Virgin Martyrs, the ruined church and convent are still part of communal religious activities of locals who still use Latin and Spanish in their liturgical activities.

José explained that Fuga then was developed by the Dominicans as a jump-off point for their missions in China.

He was declared saint by Pope John Paul II in 2000 and is now called “Protomartyr of China,” for having been the first to die for the faith there.

Aside from the church complex, the island has another structure ruined through time—the Villa Vicenta, believed to be the seat of the Spanish civil government in the Babuyan group of islands. –CONTRIBUTED