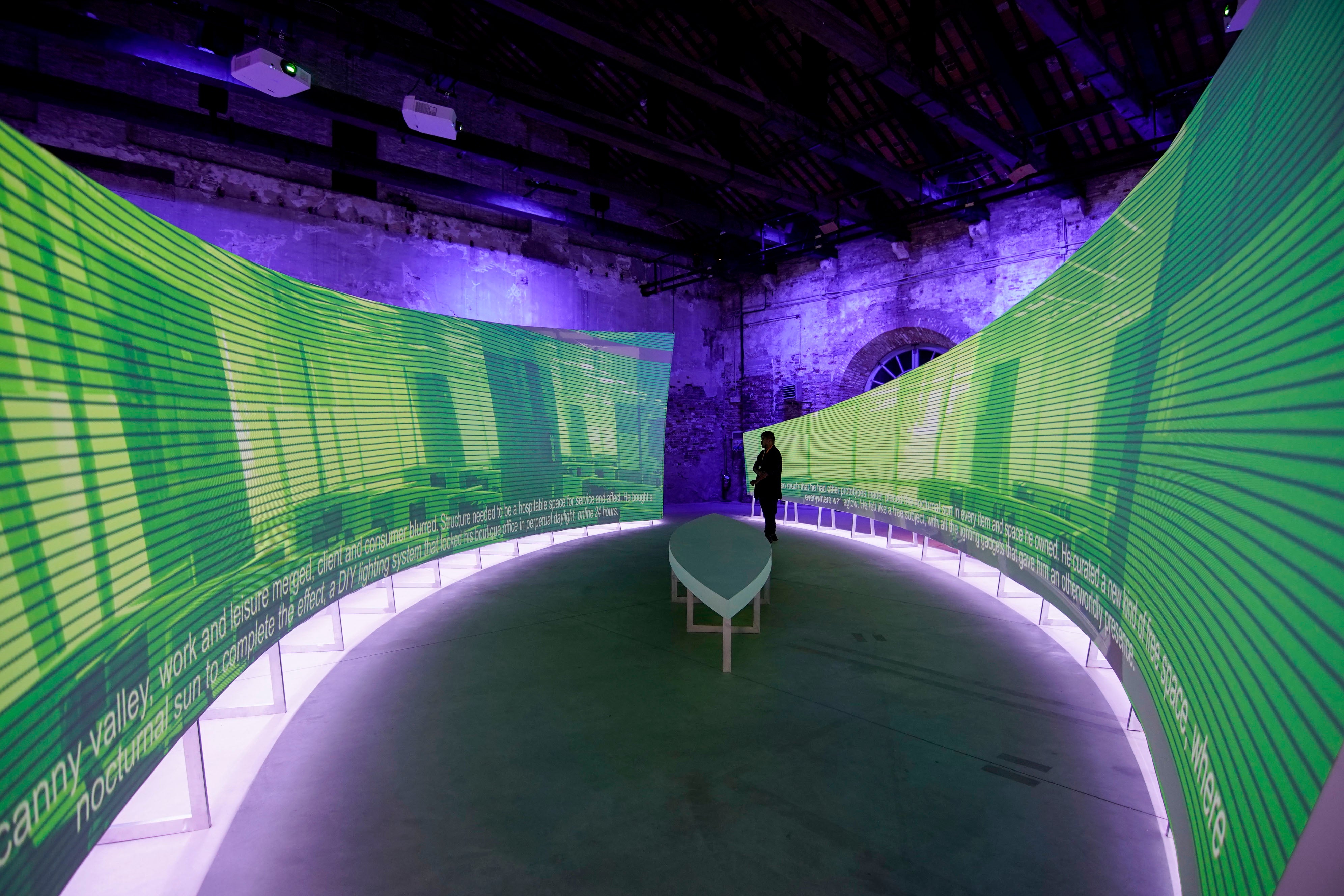 VENICE—Proud of the world-class talent of its artists and the rich conflicted narrative of its long history under colonial rule, the Philippines on Thursday made its mark in the Venice Architectural Biennale 2018 with a remarkable interpretation of how architecture is able to give “Freespace” to humanity.

The concepts of colonialism and neoliberalism manifested in the architecture of Philippine cities and reflected in day-to-day lives of Filipinos were gems that allowed art lovers and thinkers alike to reflect on their identities in the past, the present and the future.

If only for provoking a profound introspection on who we are as Filipinos—and that while talking about architecture—Edson Cabalfin, the curator of this year’s Philippine pavilion at the 16th International Architecture Exhibition, was a resounding success.

No one could blame Cabalfin for indulging in an emotional moment at the vernissageor preview before the public viewing of his curatorial concept “The City Who Had Two Navels” on Thursday in this Renaissance City in northern Italy.

Cabalfin’s work is the country’s entry to what Sen. Loren Legarda dubbed as the “Olympics of contemporary art”—the Venice Biennale whose architecture exhibition this year drew 63 nations with national pavilions at the Arsenale and Giardini.

The Venice Biennale which is regarded as the world’s most prestigious platform for contemporary art, holds the art and architecture exhibitions in alternating years in this city where it began in 1895 to mark the wedding anniversary of the rulers of the House of Savoy.

“The presence of the Philippines in the Arsenale is really a testament to the Philippines being at the center of art and culture in the world,” Legarda said in an emotional speech before a crowd that filled the Philippine pavilion mounted in a 120-sq-m building at the Artigliere in Arsenale.

She recalled how she battled for years for funding and support so that the Philippines could participate again at the Venice Biennale after its first and last participation in 1964. The country reentered in 2015 at the art biennale.

“The conversations you have elicited from our colonial past to our neoliberal present and the many possibilities of the future really boggles the mind,” Legarda said in her speech, addressing Cabalfin.

There was nothing but praises for Cabalfin, visual artist and filmmaker Yason Banal and exhibitors from the University of the Philippines in Diliman and in Mindanao, University of San Carlos in Cebu, De La Salle-College of St. Benilde in Manila, and the nongovernmental organization TAO-Pilipinas when the pavilion was opened for guests invited for the preview days before opening the six-month public viewing on May 26.

Some spectators were teary eyed after experiencing the pavilion’s huge video installation and physical exhibits of artifacts, models and vignettes of daily life in Metro Manila, Cebu and Davao at the Artigliere in Arsenale, once the biggest production center of maritime trading vessels in preindustrial Europe.

Cabalfin took inspiration from National Artist for Literature Nick Joaquin’s novel “The Woman Who Had Two Navels” for his curatorial proposal, winning over 11 others submitted during the open call for proposals for the pavilion.

At the preview where Cabalfin gave a select group of journalists from the Philippines a walking tour, he explained his work highlights the two “navels that are in constant dialogue: first, how colonialism impacts the formation of the built environment or architecture; and second, how the process of neoliberalism alters the urban landscape.”

In the first navel, Cabalfin used photos and physical exhibits in presenting a critical interpretation of how Philippine portrayal in global expositions from 1887 to 1998 “reproduced colonial narratives of the exotic and the primitive.”

Indeed, according to National Artist for Literature Virgilio Almario, chair of the National Commission for Culture and the Arts, who was also present at the vernissage, Filipinos have been portrayed as “living in huts, wearing loin cloths and dancing in circles.”

For the first navel, Cabalfin asks: Can we truly escape the colonial?

In the Second Navel, “Neoliberal Urbanism,” Cabalfin showcased the modernization of Philippine cities in Metro Manila, Cebu and Davao based on their ability to compete for capital in the free market agenda of neoliberalism.

In this navel, cities are ruled by business process outsourcing companies shaping a new 24-hour urban experience, rise of mixed-use buildings and shopping malls as alternative urban public spaces, traffic congestion, squatters in the cities and the impact of overseas Filipino workers money on the expansion of residential and commercial developments.

For this navel, Cabalfin asks: is neoliberalism a new form of colonialism?

While saying it was the job of the viewers, not him, to provide the answers to these two questions, Cabalfin conceded that it was as if colonialism never left.

In the middle of the navel-shaped exhibition, Banal’s artistic prowess produced a hypnotic and immersive video installation showing the “juncture of the two navels” where visitors are invited to contemplate on their own experiences with the colonial and neoliberal.

In response to the theme of the biennale, “Freespace,” Cabalfin and his fellow exhibitors sought to present a critical interrogation of architecture and urbanism’s ability to empower and transform people’s lives.

The curators of the 2018 Architecture Biennale, Yvonne Farrell and Shelley McNamara, an award-winning team based in Dublin, asked countries to focus their exhibits on “the question of space, the quality of space, open and free space.”

“Freespace or ‘Pookginhawa’ underscores the strategies by which Filipinos use the built environment as modes of resistance and appropriation to an ever-changing world,” Cabalfin said.

Almario translated “Freespace” into “Pookginhawa,” saying that “ginhawa” was a more nuanced interpretation of freedom. For Filipinos, he said “pookginhawa” connotes relief or lightness and ability to breathe.

“When a space is filled with life and gives breath, that is a space that embraces concepts of kindness, generosity, democracy and hope which is the space that Filipinos crave and dream of,” Almario said.

“As we view the realization of Dr. Cabalfin’s curatorial concept in this beautiful space, the Artiglierie of the Arsenale,” Legarda said, “let us allow ourselves to question what we see. Let us converse with our fellow spectators, with the exhibition itself, and with ourselves. Let us challenge the beliefs of the curator. After all, this is the beauty of the Venice Biennale and this has been our goal in our participation—to let our country showcase our creative talents and at the same time challenge the truths of the world by opening up conversations through our national pavilion.”

The national pavilion of the Philippines’ biggest and longest colonizers, Spain and the United States, presented their own concepts of “Freespace.”

Joining Cabalfin and Banal for the preview were Rogelio Regalado from UP Mindanao, Dean Yumi Espina from University of San Carlos, Gerard Thomas Joson from UP Diliman, and Arlene Lusterio of TAO-Pilipinas. The fifth exhibitor was College of St. Benilde.

Legarda was joined by Almario, Philippine Ambassador to Italy Domingo Nolasco; Riya Lopez, director of the Philippine Arts in Venice Biennale, and representatives of the Department of Tourism.

Businessman Fernando Zobel de Ayala and his family were among those who came to witness the opening of the national pavilion. Zobel de Ayala was among the jurors who judged 12 curatorial proposals submitted for the Philippine pavilion, which Cabalfin won.

Another juror who attended the program was Lani Maestro, a visual artist who participated at the Philippine pavilion in the 2017 Venice Art Biennale.