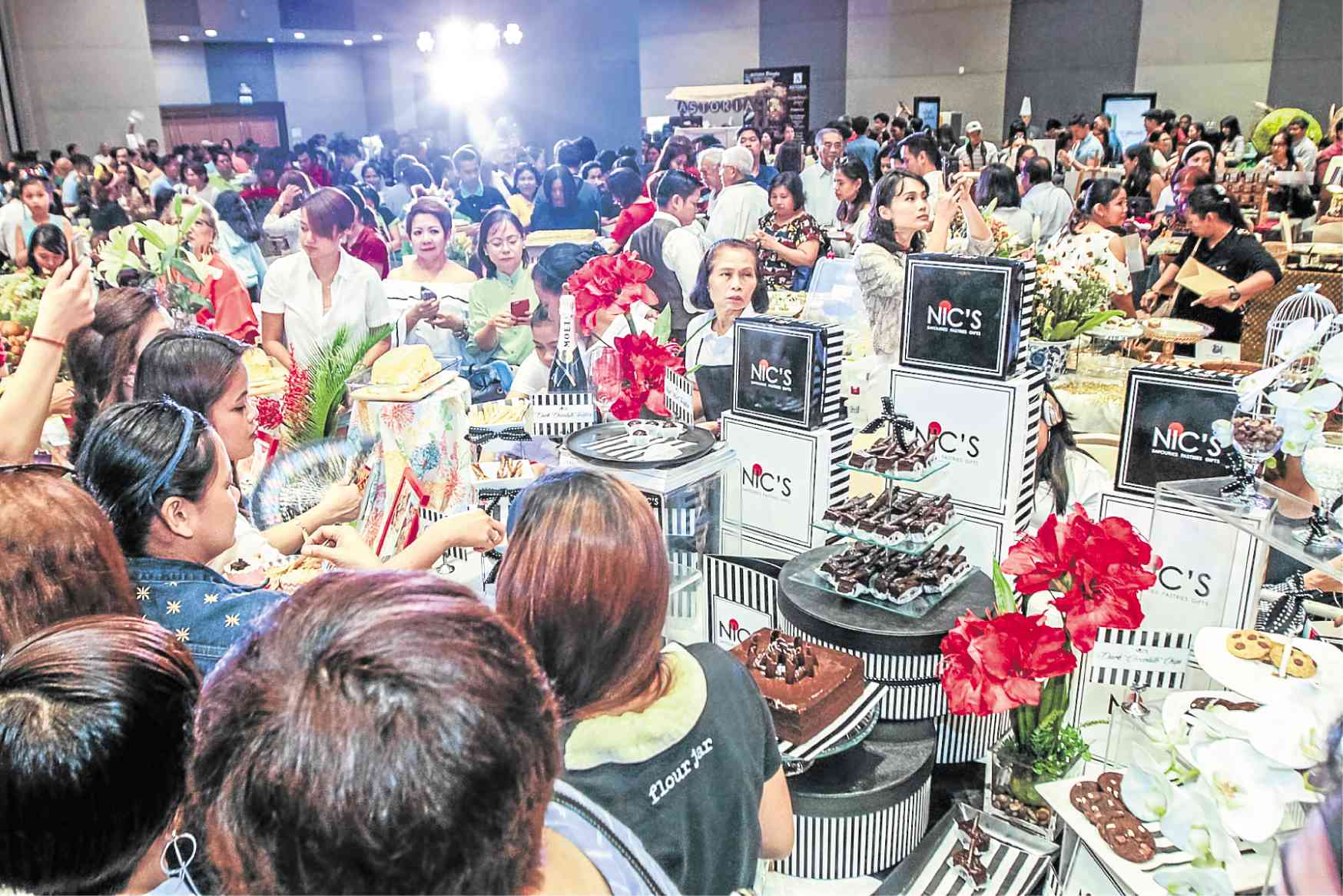 Sweets unlimited at the hit launch of ‘Best Desserts 4’

“This is by far the most extensive and longest list of our best desserts. Our list grows every year because of our innovative bakers,” said Baga-Reyes.

“I noticed the very obvious resurgence of irresistible homemade desserts,” San Juan said. “Many, mostly women, were beginning to concoct cakes, brownies and the like in their homes. People were talking about the cakes of Baby Yulo, for instance. And before you knew it, each dessert maker was already doing it full-time and having a thriving business.”

San Juan said, “At one lunch, I told Millie (Dizon, of SM) what Vangie had told me that the dessert makers we listed were willing to bring their samples, but we had no venue. Millie offered SM Aura, which was newly opened then. We held it there and were overwhelmed by the huge turnout. As early as then we realized we had a banner event in our hands.”

The bakers included in the book are honored at the event. As host Tessa Prieto-Valdes put it at the Book 4 launch, “You guys are the best of the best.”

SMX Convention Center was transformed into a haven for dessert lovers where rows and rows of the country’s best pastry chefs, hotels, restaurant owners and bakers handed out samples of their sweetest, most decadent creations. There were pies and cakes, cookies and crepes, ice cream, chocolate and more. Some of the chefs had traveled all the way from Antipolo, Pampanga and Cebu to be at the event.

“All these people—purveyors, dessert lovers—coming together to celebrate dessert… It’s such a rare event,” said Miko Aspiras, an award-winning chef whose two desserts, Basque Burnt Cheesecake and 17-Layer Chocolate Cake, are featured in the book.

Inquirer president and CEO Sandy Prieto-Romualdez was there to congratulate the bakers and welcome the massive crowd. “Everything you have here today are worth the calories,” she said. “That’s what I told my friends, too, when I invited them.”

There was great energy at the launch, with people trying as many desserts as they could and cheering for the bakers onstage. It felt like a big, sugary party.

Gay Vazquez, whose Mud Pie and Canonigo are featured in the book, said, “Everyone is here, my friends, my cousins, all my relatives are here. Some of them went on leave just to come here.”

The crowd was a sea of dessert lovers. Chefs and bakers mingled with fans of their creations. There were people of all ages, including a lot of kids. Clearly, this country’s love for dessert knows no bounds.

“You guys are proof that Filipinos aren’t just great musicians and singers but chefs and bakers, too,” Prieto-Valdes said.

“As a dessert lover, I usually refer to Inquirer Lifestyle’s ‘Best Desserts’ list in search of the best cake, cookies, etc. Guess what, this year, we made it to their list! What an honor!” wrote The Blue Toque’s Mary Anne Ramos, whose Belgian Melt-In-Your-Mouth Chocolate Cake is in the book.

Dedet de la Fuente of Pepita’s Kitchen is a Best Desserts regular. She said, “I have clients sending me e-mails from abroad saying they heard about me through the book. It reaches so many people. Whenever I bring my degustacion and my lechon abroad, I always bring one or two of my desserts and I tell them that they’re included in the ‘Best Desserts’ lists of the Inquirer.”

Dedet’s Biko Langka with Biko Tutong is in “Best Desserts 4.” Her booth was once again a huge hit, with people lining up not just for her desserts but also her famous truffle lechon. “The people are so excited. They want my lechon, my dessert and they love my setup, which I really appreciate,” she said.

“When you bite into it, it’s what the Philippines is all about. That’s what we tell our guests and they agree,” said Bess Howe about the hotel’s Crepe Samurai.

For the bakers, the event is a chance to share not just their creations but also the secrets behind them.

“We bake our leche flan for six hours,” said Yvette Hipolito of Joconde Cakes and Pastries. Their Chocolate Decadence Cake is also on the list.

Hipolito said she enjoys the “Best Desserts” events because “we get to meet a lot of people. And we get to see our former students who are also now part of the list.”

Added Cafe Nenzo’s Ann Regoso-Abacan, a dietitian-baker whose Low-Calorie Banana Langka Cheesecake is featured in the book: “I enjoyed the event a lot. There was a flood of very good desserts and I was happy to see my idols in baking.”

The event was open to the public and people paid just P100 to get in. Proceeds from ticket sales will go to Gota De Leche, a foundation that provides nutritional and medical needs to marginalized children and breastfeeding mothers.

“This is the second year that we have been the beneficiary of ‘Best Desserts.’ Kumain po kayong mabuti at isipin niyo na habang kumakain kayo ay nakakatulong din kayo,” Amaryllis Torres, the foundation’s newly elected president, told the crowd.

“It’s great to see the development and progress of the dessert scene. Everyone’s super competitive and we all benefit from that. People are really stepping it up,” Aspiras said.

Dizon, SM’s senior vice president for marketing and communications, also expressed elation at the turnout. “Thank you to Inquirer Lifestyle for partnering with us… This event gets bigger and bigger each year. It’s wonderful to see this new generation of bakers emerging.”