Got indigestion? These cows could solve your milk problem | Lifestyle.INQ ❮ ❯ 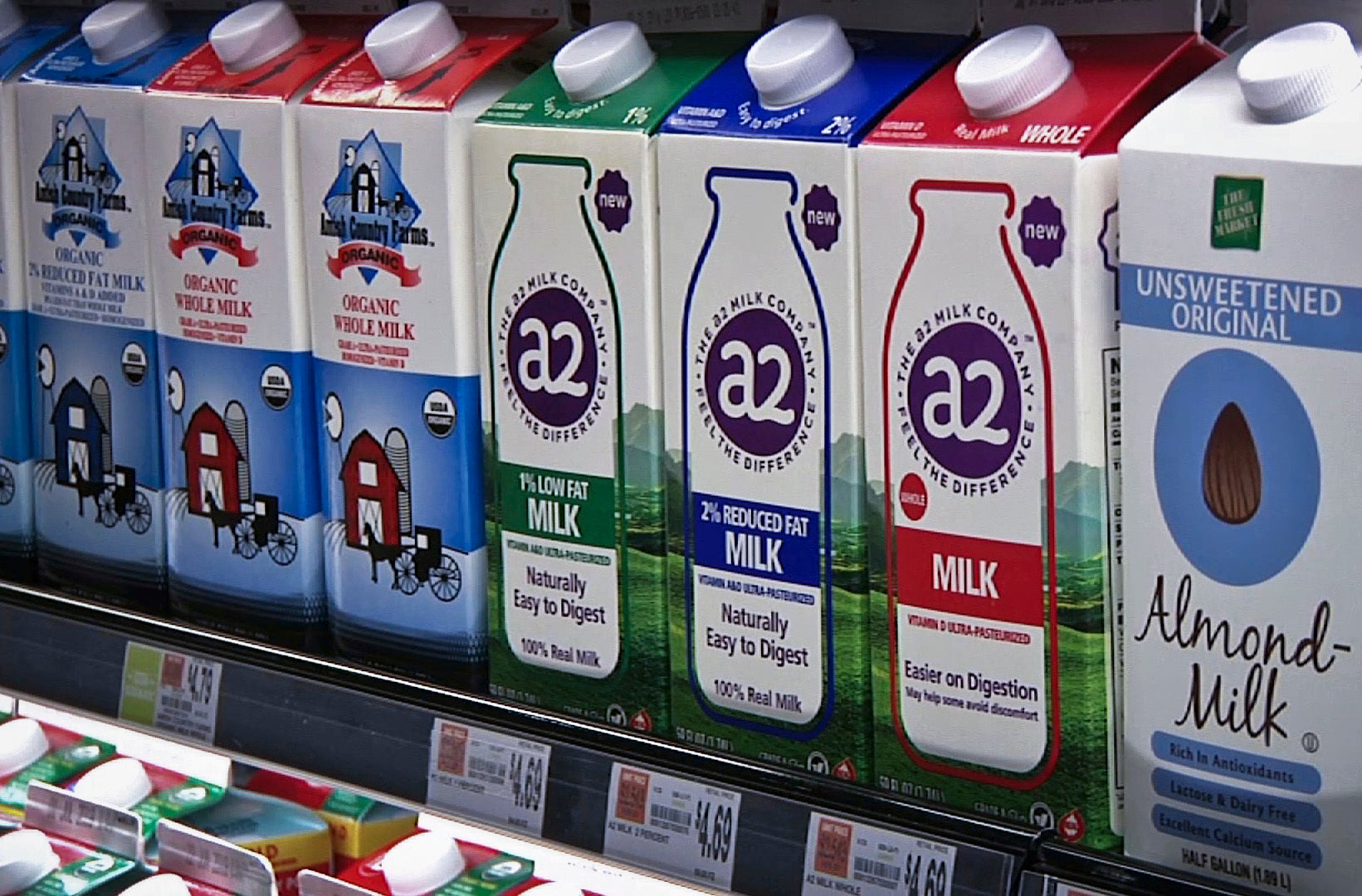 In this Friday, May 18, 2018 photo, A2 milk is displayed on the shelf at The Fresh Market in Latham, N.Y. So-called A2 milk is showing up on more supermarket shelves. (AP Photo/Michael Hill)

Got indigestion? These cows could solve your milk problem

Dairy companies looking for ways to appeal to people who avoid milk because of indigestion are promoting what they described as a natural, easier-drinking alternative: A2 milk.

A2 milk is produced by a subset of cows that produce milk lacking a protein, which advocates said is associated with milk’s dyspeptic tendencies.

Claims about A2 milk have its skeptics but the bet is that consumers will pay an extra dollar or more per half-gallon to drink milk that might not cause indigestion, gas, and bloating.

“Our approach has been, ‘Listen, if you thought you had trouble with milk, try our A2 milk because you may be able to have it,'” said Dan Ripley, whose family farm in central New York has both ordinary cows and those producing what he sells as “Premium A2 Guernsey” milk.

The major A2 player in the United States, Australia-based a2 Milk Company, started selling its milk in California in 2015, and this year began making a big push into the Northeast. Its milk is now sold in major eastern chains such as ShopRite and Wegmans, and TV ads with the tagline “Love milk again” went up in New York City and elsewhere recently.

“The Northeast is really the big kahuna of the dairy industry in the US,” said Blake Waltrip, the company’s US CEO.

The company’s US expansion complements its efforts to boost distribution in markets including Southeast Asia and the Middle East under a recent deal with the world’s biggest dairy exporter, New Zealand’s Fonterra.

Most cows produce milk that contains both A1 and A2 proteins. Promoters of this milk claimed the A1 protein can cause bloating and other symptoms because of the way it breaks down when digested. Some cows naturally produce milk without the A1 protein, and farmers can breed those cows with an eye toward building a herd that produces milk that only contains the A2 protein.

This kind of milk still has lactose but proponents said it could help people who mistakenly assumed they were lactose intolerant.

In Buffalo, New York, Public Espresso + Coffee co-owner James Rayburg said he has a history of milk issues but can pour A2 on cereal or add it to recipes without worries. His shop recently switched over to Ripley’s milk for all the drinks they serve.

Not everyone is convinced.

The National Dairy Council, which represents US dairy farmers, said the claim remains an unproven theory.

Bruce German, director of the Foods for Health Institute at the University of California, Davis, said existing studies have either methodological flaws or may have issues because they were funded by the industry.

“Unfortunately, all the studies are somewhat sort of flawed in various ways, and they seem to be spinning a rather attractive story around A2,” German said.

Ripley understands the skepticism and said he became convinced only after he discovered his own children could drink A2 without the digestion problems that afflicted them with regular milk.

Ripley Family Farm is essentially a competitor to Waltrip and the far larger a2 Milk Company but both said the milk could be a boon to a US dairy industry that has milk consumption dropping for decades, and wholesale prices slumping amid a global oversupply.

While the vast majority of Ripley farm’s revenue comes from wholesaling traditional milk, selling Guernsey A2 milk and cheese was a way to make extra income.

Other farmers who sell to the a2Milk Company, like Hourigan’s Dairy Farm in central New York, get a premium for that milk from the company. While there were costs associated with segregating A2 milk and performing genetic tests to make cows produce the right type of milk, the extra money is appreciated.

“The milk market is kind of tough right now, and anything we can do to add value to your product definitely helps,” said Hourigan’s farm manager A.J. Wormouth.  /kga