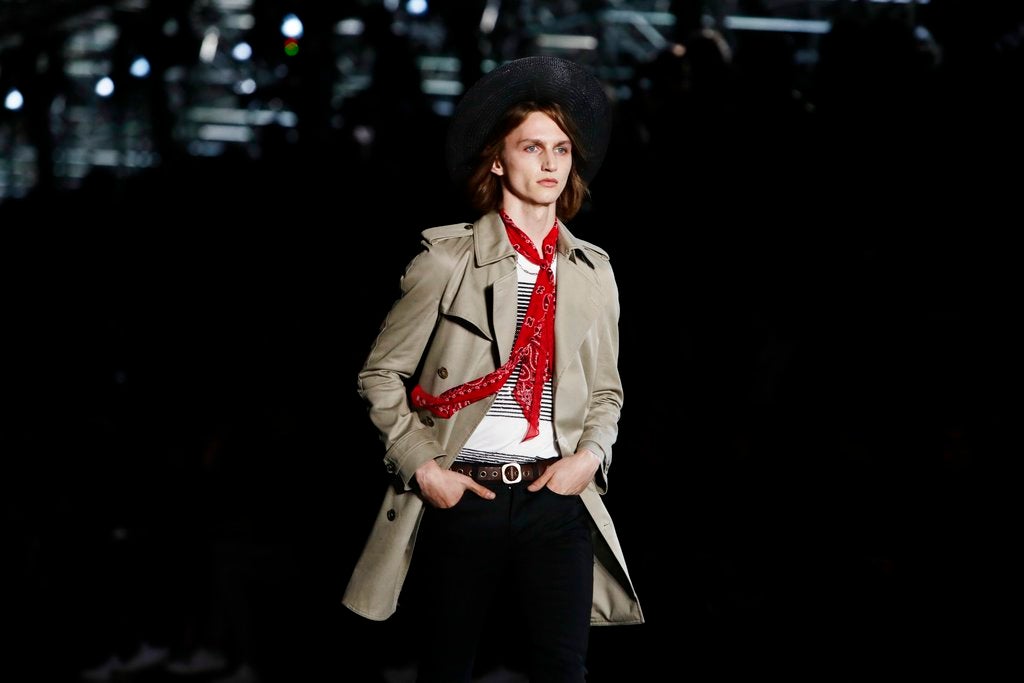 JERSEY CITY, N.J. (AP) — Saint Laurent decamped from Paris to New Jersey for a menswear show with a shine that matched the glittery Manhattan nightscape Wednesday just across the downtown harbor.

Creative director Anthony Vaccarello, in his first turn in town, put his guests on a high platform and his models, both men and women, on a liquid black marble runway overlooking New York’s twinkly skyscrapers on the other side of the water.

His clothes? They were mostly black, silver and gold, with snakeskin touches here and there, including a rustic tan jacket that evoked, what, the American West? Also plentiful: bandanas.

The finale came in a march of bare-chested men painted in silver glitter to go with their black disco pants.

Vaccarello’s vision, he said after the show, was indeed an urban cowboy, one fond of 1970s short jackets paired with high-waisted trousers. Some had on killer boots in white leather and snakeskin. There were also black hats, wide-brimmed ones, red cowboy shirts, silver belts and a lacy open weave in a long-sleeve top.

“New York is freedom, a city brimming with energy and possibilities,” Vaccarello said, “the perfect backdrop to frame the spirit of this menswear collection,” one that had him crossing boundaries by putting women in the same clothes.

As for New Jersey, the French-based fashion powerhouse built open scaffolding to go with the shiny floor, facing guests that included Sean Lennon, David Franco and Ezra Miller (he’s “The Flash”) toward the inky water and New York skyline.