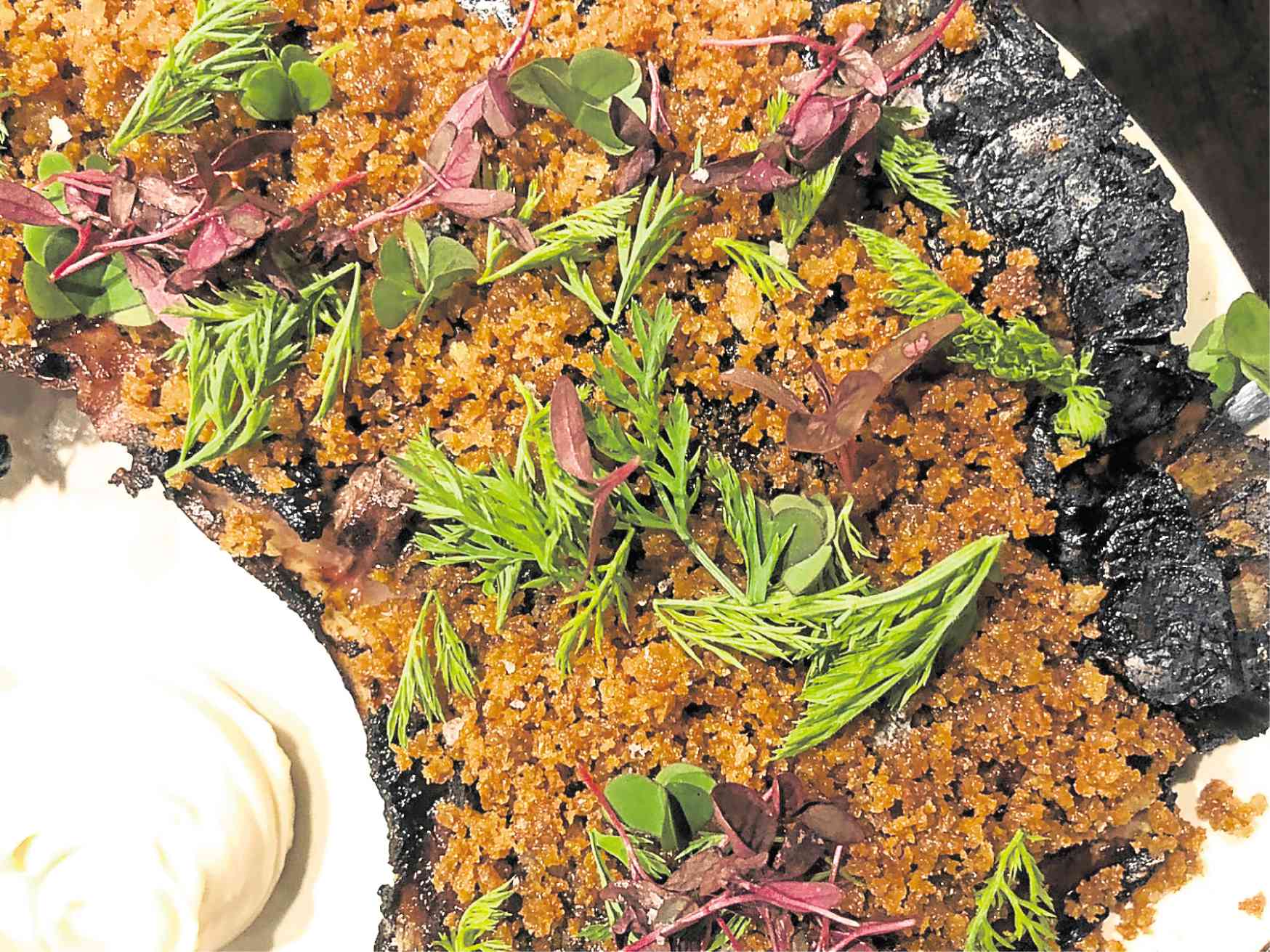 Tuna jaw with yeast and miso

At the moment, my favorite way to cook is using a wok. I’m not very good at it, having spent most of my time in domestic and professional kitchens using a traditional French batterie de cuisine with sauté pans (both sautoir and sauteuse), saucepans, frying pans, omelette pans and even a pan dedicated to making tarte tatin, upside-down apple tart.

I learned how to use a wok from Grace Young’s books, rather than in a restaurant kitchen. So I use it in a domestic manner, rather than having a high-pressure burner that’s adjusted using one’s knees, while your hands are busy tossing the food several feet in the air and ladling stock into it all at once.

I live in an apartment that doesn’t allow gas cooking, so I have invested in an induction wok. Rated at 5,000 watts, it is wired to the circuit breaker and can go from zero to incineration in a few seconds.

Unfortunately, I don’t seem to be able to get much modulation for the useful range in between the two extremes. With my trusty copper pots and a good gas range, I can modulate a sear to a braise, and then to a simmer, with a quick flick of my wrist.

You can literally put things on the back burner (i.e., the burner at the back) to keep warm while you tackle a different dish that has to be fired immediately. This is one of the reasons I started trying to tackle the maddening and deceptive simplicity of cooking with the wok—I simply knew my equipment too well.

Add into the mix a pocket digital probe thermometer and a thermocouple on a wire, and I know what’s going on in the kitchen at a glance.

With a wok, I don’t know if we’re going to have a masterpiece for dinner, or the family will end up ordering pizza.

The same masochistic streak of unpredictability is what seems to be driving Josh Boutwood to abandon his extremely well-appointed kitchen on Kamagong Street, Makati, in favor of cooking everything over firewood in his new restaurant.

The main difference, of course, is that if I screw up, the worst that could happen is that I have a very cross spouse. But Boutwood isn’t allowed to screw up.

He’s been scheming to open his new pre-industrial restaurant for over a year now.

It’s now at Arya residences in Bonifacio Global City, whose owners have a greater taste for adventure.

When the restaurant is in full swing, Boutwood has three levels of fire going: a roaring fire, hot coals and embers. Further gradations are made by raising and lowering the food using a system of winches and pulleys, rather like an inquisitor’s rack.

This is all very well, you may be thinking, but what does it have to do with me?

If the chef wishes to handicap his ability to modulate temperature by not taking advantage of modern equipment and the invention of LPG, that’s his problem, just as he is free to cook with one hand tied behind his back or balancing on a unicycle. The customer still demands food cooked to perfection.

Whether the chef’s methods are contemporary or antique is of little concern to the diner.

We have to go back to my travails with the induction cooker. Everyone knows that this is the cooking method of the future.

It is actually more efficient, peso for peso, than cooking with gas, at least according to claims made by Meralco, which is a disinterested party in the debate.

Because the magnets work directly on the cooking vessel, it actually makes for a very cool kitchen. And while the extremely rapid response to change in heat used to be wok’s party trick, induction lets you do this with any compatible pot.

So everyone should be switching to induction—except that most chefs hate it. Food, they say, doesn’t taste right. And my father used to say that, too, about the beef tendons that he insisted be cooked over charcoal in our backyard when we still lived in a house, because simmering over a low flame just isn’t the same.

While induction versus gas might be a matter of a learning curve for chefs, gas vs wood fire and charcoal has a more obvious explanation. Wood imparts its own unique signature onto the food.

This is why Boutwood uses oak or coconut or santol. The method, while adaptable, also dictates its own cuisine: straightforward, unfussy, with clean, clear flavors rather than delicate, fussy layering.

I particularly enjoyed the fish dishes. There is a tuna jaw with yeast and miso which is robust and imposing, while a barramundi served on the bone is a little more fiddly, but no less rewarding.

There’s also lamb, which arrives redolent of its own fat that has rendered and sputtered over itself. There’s a sauce of some sort—mint and malt, I understand—but it doesn’t really need it.

My favorite appetizer is the headcheese, of which I could have eaten three times the quantity that was served. But I’m told that its days on the menu are numbered because no one likes headcheese. (I’m planning to spearhead a Change.org petition to bring it back.)

I like almost everything on the menu. Desserts are very competent, but pale somewhat in contrast to the fireworks of the main courses.

I feel the restaurant has to signal to the average diner the radical nature of what it’s trying to do with fire—not polite, predictable gas flames, but real wood flames, full of flavor. But I don’t want them to go and do a Flintstone-theme dining room, either. Nor should “pre-industrial” give the impression that it’s a paleo diet sort of joint (although if you’re willing to skip the sourdough, noncarb eaters will be well-served here, it’s a great restaurant for keto dieters).

It’s a love affair with fire and the first, civilized act of putting meat over it. All the other flavors are just accoutrements.

I’m a great fan of Boutwood as a magician in the 21st-century kitchen, but Savage showcases a whole new, unexpected fun and enjoyable side to him. —CONTRIBUTED