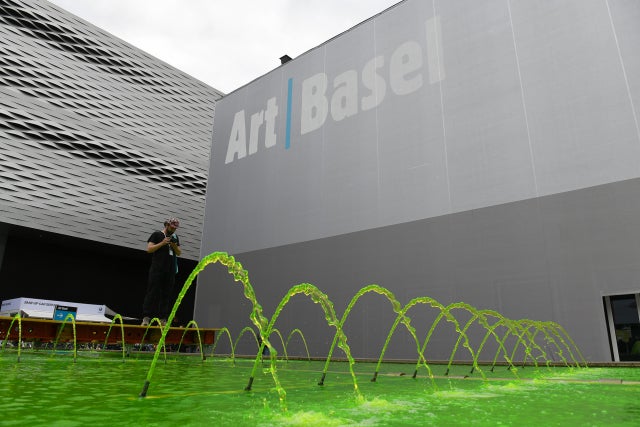 As wealthy VIPs filtered into Art Basel’s imposing halls to view some of the most valuable works in contemporary art, the staff at Frame Art Fair were a kilometer away scrubbing floors.

Frame, which launched in Basel this year, is the newest satellite fair trying to respond to a wealth gap in the art world, with big name galleries getting richer and smaller players increasingly going broke.

Frame’s founder, French businessman Bertrand Scholler, told AFP that the current system that sees gallerists battle for slots at fairs like Art Basel, where participation for a small gallery can cost tens of thousands of dollars, is “killing” art.

He voiced hope that Frame’s model of profit and burden sharing among about a dozen emerging galleries can provide an alternative to Art Basel, which opens its 49th edition to the public on Thursday.

Frame’s home at the humble, two-story Basel Art Center is in clear contrast to the Swiss city’s Messeplatz, where vast conference halls and luxury hotels have become synonymous with Art Basel’s powerful brand.

Scholler said he respected the work exhibited at Art Basel each year but raised concern that the pressure to notch up multi-million-dollar sales had made the show stale and allergic to new galleries taking risks on provocative artists.

Even Art Basel, the art world’s most dominant fair, recognizes the industry is hurting.

The Art Market Report commissioned by Art Basel and its main corporate sponsor, Swiss bank UBS, noted that while global sales of art and antiques ballooned to $63.7 billion (54 billion euros) last year — a 12-percent increase compared to 2016 — the smaller fish are struggling to survive.

In 2007, five new galleries opened for every closure, but in 2017 that trend had flipped, with gallery closures outnumbering openings for the first time in years, the report said.

The main explanation for closures is that the costs of “maintaining a retail presence in a prominent urban location have become prohibitively high, versus the low and variable volume of sales”, the report added.

“This is a fair that is taking place at a moment when galleries are speaking openly, more openly than ever, about the struggle, how hard it is to be a gallerist,” Art Basel’s director Marc Spiegler told reporters on Tuesday.

Spiegler said that expanding Art Basel beyond the 290 galleries exhibiting this year would not help, as the show would risk becoming “a long, kind of death march experience,” with far too much art to digest.

He also dismissed the notion that making it to Art Basel indicated a gallery was financially solid.

“There are many galleries here who are going to struggle,” he said, adding that very few of the 290 were “cruising” financially.

Existing on what could be described as the Basel art scene’s scrappy fringe, a gallery called The Proposal, specializing in installation concept art, was using stunts to attract pedestrians on their way to more prestigious venues.

In a space resembling a US fraternity house — including the hotdogs and beer in plastic cups — The Proposal was selling miniature statues of Damien Hirst encased in glass and sitting on a toilet, a spoof on Hirst’s influential series, The Tranquility of Solitude, which encases dead animals in the loo.

The Proposal’s chief Jeremie Jean-Ferdinand Maret joked that he was exploiting “the richest artist in the world (Hirst)… to refinance (his) gallery.”

The gimmick, helped by staff shouting “Damien Hirst for sale” out the window to passersby, was a last-ditch option available to a gallery on the brink of extinction, he told AFP, adding he would close after Art Basel and possibly reopen in Ibiza, partly because it was cheaper.

“I’m selling art like I’m selling fish. I’m screaming out (the window). All the things you shouldn’t do as a gallery,” Maret said.

“There is a lot of talk over the last year or two… but solutions haven’t come quite as quickly,” she told AFP.

Various things are being tried, like major galleries subsidizing smaller ones to participate at important fairs, she said and added that online galleries would probably continue to attract mid-market buyers too.

McAndrew also said that while more prominent gallerists have always done better financially, the art market has been moving towards a “superstar, winner-take-all” mindset.

Hours after VIP viewing began at Art Basel Tuesday, the Hauser and Wirth gallery announced it had sold a painting by American artist Joan Mitchell for $14 million.

Public attention is often so focused on multi-million-dollar sales that some collectors erroneously feel they cannot get “anything good” for less then $100,000, McAndrew said.

“It threatens the entire infrastructure,” she added, stressing that emerging artists need medium-sized galleries to help them develop and survive.

“If that is not there, then where do (new artists) come from?” she said. AB

Original map of Pooh’s Hundred Acre Wood up for auction