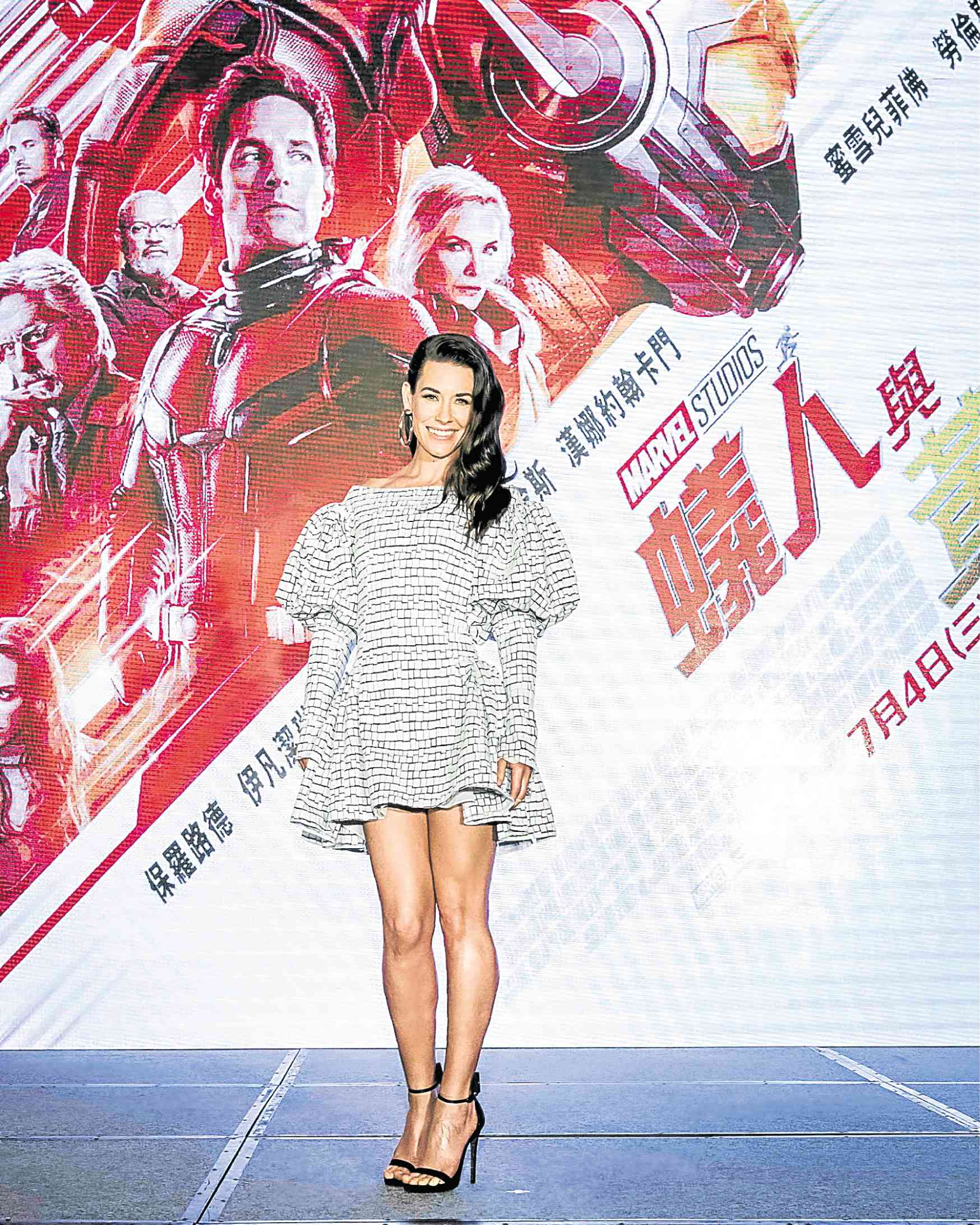 Evangeline Lilly is the Wasp

Evangeline Lilly is making history. As the Wasp, she is the first superheroine to be in the title of a Marvel Cinematic Universe (MCU) movie for “Ant-Man and the Wasp.” She’s very happy about it.

“It feels absolutely incredible and I am so honored to be in this moment with the MCU,” she said. “I think it goes without saying that any one of the super heroines in the MCU and rightfully have a standalone film, so I’m just excited to be part of that sisterhood and represent and to be there in the bill for the first time and hope that this is just the beginning of many more.”

In many ways, the Wasp was introduced at the very end of 2015’s “Ant-Man” and she really only gets going in this film. It’s the latest in a series of empowered, powerful onscreen performances by the 38-year-old Lilly, who is best known for her role as Kate on the TV show “Lost” from 2004 to 2010. She’s also played the elf shield maiden Tauriel in Peter Jackson’s “The Hobbit” trilogy.

“Sometimes I wonder why these roles are attracted to me,” she asked. “Why? And then the truth is I’m kind of a control freak in real life. I run my household, I run my husband, I run my children, I run my businesses. I think when I look at roles, I feel I have the need to relate to the characters in order to believe that what she’s doing is authentic. Sometimes I’ll read characters and I’d think, who would do that? Nobody would really do that! Well, somebody would do that, maybe I just wouldn’t do that.

Always, if I do a role, it’s because I believe her. I’ve read on the page and I believe that woman is real. I believe she’s making choices the way a real woman would make choices. Again, I think that usually falls back to how I make choices, what my experiences have been because I need to relate to my characters.”
Lilly, who resides in Hawaii, has a personal Philippine connection: She did missionary work as an 18-year-old in Palawan.

Now, she has been initiated into the big world of the MCU and she loves it. In a genre where actors have constantly complained about how uncomfortable their costumes are, Lilly stands apart.

“It’s pretty great,” she said. “I love my costume. I don’t know if this is true, but I believe my suit is the most comfortable in the MCU.” She does have one slight quibble: “The only bummer about the suit is that I like to eat and I like to in large quantities. I’m in a very tight sight that makes it very hard to breathe much less eat. So I had to eat in tiny quantities. That was irritating. It’s still much cooler than Ant-Man, I’ll tell you that.”

“Ant-Man and the Wasp” not only has a super heroine in the title, but it also features a female villain. The Ghost— originally an Iron Man baddie usually portrayed in the comic books as male—is played by actress Hannah John-Kamen. The change was something Lilly approved of. “In the comic books, Ghost is usually a man,” she said. “Here the role is being played by an incredible, powerful, intelligent, beautiful woman, which is exciting because now we have a female villain and a heroine, other females which I can’t talk about, and we’re all together in this movie.”

It is clear that this is a new level for Lilly and she remained humbled by it all.

“I couldn’t anticipate that it would be so loved and all over the world there are people who care about these characters, who are invested in these characters, who want to see more of these characters. That feels so special and surprising and something you wouldn’t expect in a million years, that you would be part of. To be in the position where your name is in the title and these people are coming to the movie theater is see that is an incredible honor.” —RUEL S. DE VERA