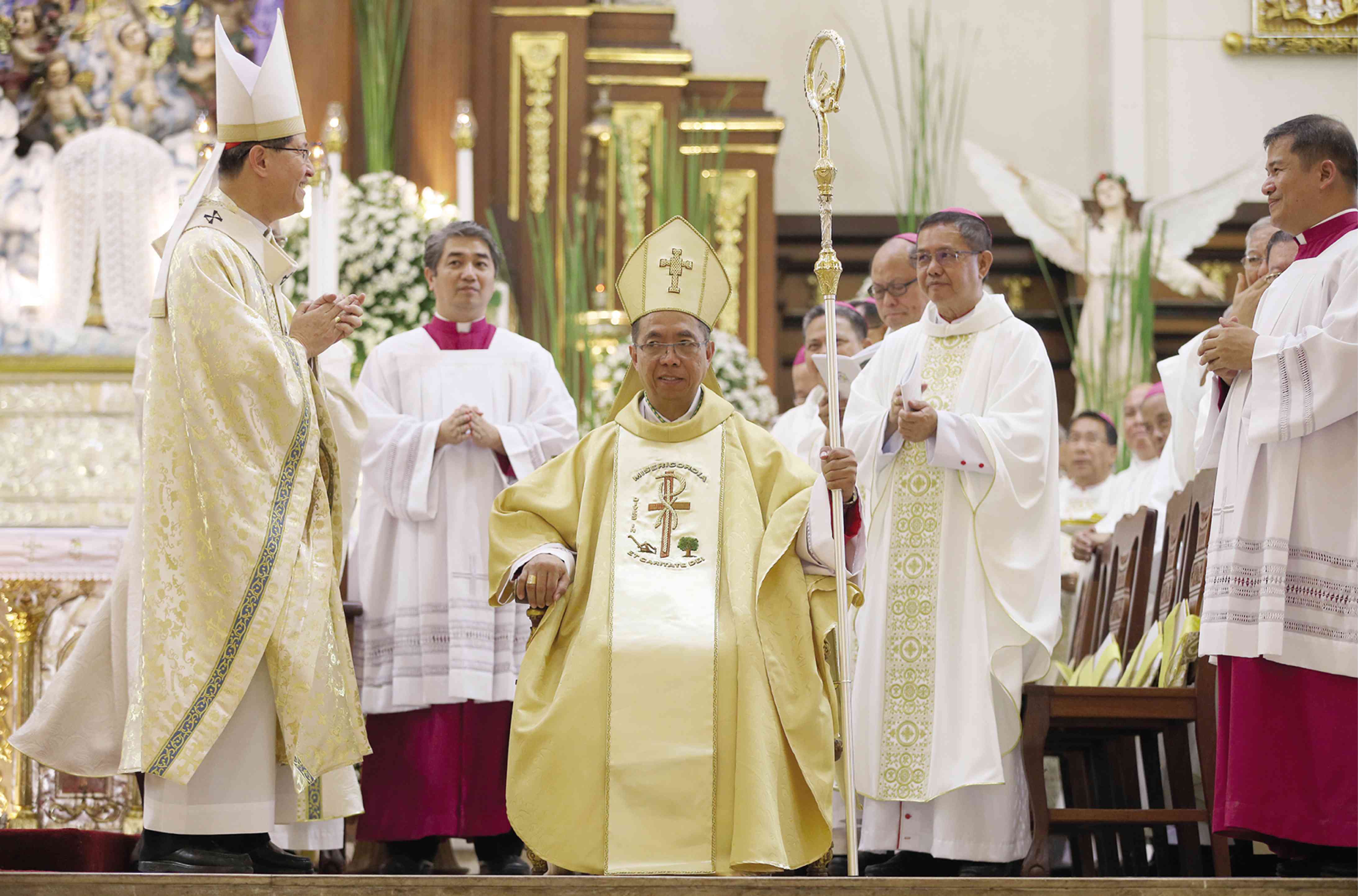 Msgr. Bartolome G. Santos Jr. was installed as the new bishop of Iba at the Cathedral of St. Augustine in Zambales on May 25.

Because Archbishop Gabriele Giordano Caccia, the apostolic nuncio to the Philippines, was in Rome, along with Manila Archbishop Luis Antonio Cardinal Tagle, Santos was installed in Iba by San Fernando Archbishop Florentino Lavarias of Pampanga.

Iba is a suffragan of the Archdiocese of San Fernando: It became a prelature in 1955 and elevated to a diocese in 1982. It consists of the province of Zambales and Olongapo City. As of 2015, 630,503 of the province’s 788,130 population are Catholics.

Santos will be replacing Lavarias himself, named San Fernando archbishop back in 2014. Iba had not had a bishop since then until the Vatican announced the appointment of Santos last February.

Fr. Nicanor Lalog of the social communications commission of Malolos said Bishop Santos chose May 25 as his installation because it’s the feast of St. Pope Gregory the Great, after whom the Pontifical Gregorian University was named.

Santos took up his doctorate in the Roman college.

Father Lalog added that Monsignor Santos had chosen April 30 for his consecration because it was the feast of St. Pius V, who rallied Christian Europe against the Muslim Turks in the Battle of Lepanto in the late 16th century.

Pius V, a Dominican who promoted the rosary devotion, established the feast of Our Lady of Victory every October to commemorate the Lepanto triumph. Pope Gregory XII later on changed the feast to Our Lady of the Rosary.

Father Lalog said Santos’ late mother was named Victoria. Santos is also an alumnus of the University of Santo Tomas Central Seminary in Manila of the Dominicans, so he chose April 30 as his consecration day.

Lalog said Bishop Santos’ episcopal motto is “Dives in misericordia et caritate dei (Rich in mercy and love of God),” taken from the Letter of Paul to the Ephesians (2:4).

The Association of Major Religious Superiors of Women in the Philippines (AMRSWP) has called for the reinstatement of the missionary visa of Australian nun Sr. Patricia Fox and opposed her deportation as ordered by President Duterte.

They said that to fight for human rights and for the poor as what Fox had done was part of missionary work, and said the Duterte government was picking on the Australian nun because of “misogyny and chauvinism.”

“We again raise our voices in support of the missionary work of Sr. Patricia Fox and all religious who continue to work in the peripheries and all women who stand up against misogyny, chauvinism and the degradation of women,” said the AMRSWP.

The Diocese of Malolos has condemned the killing of Nueva Ecija’s Fr. Richmond V. Nilo, according to Fr. Nicanor Lalog, social communications head of the Bulacan Church.

The Bulacan clergy extended its condolences to Bishop Sofronio A. Bancud of the Diocese of Cabanatuan. Nilo was shot dead on June 10 in a chapel at Nuestra Señora de la Nieve in Brgy. Mayamot, Zaragoza.

“It was not only a heinous crime but also a cowardly act perpetrated by lost souls in our society now grappling for answers to the many violence happening in our midst,” the Malolos diocese statement reads.

“We trust the police and civil authorities will exhaust all means to bring into justice the people behind Father Nilo’s murder along with those other crimes that remain unsolved to this day.”