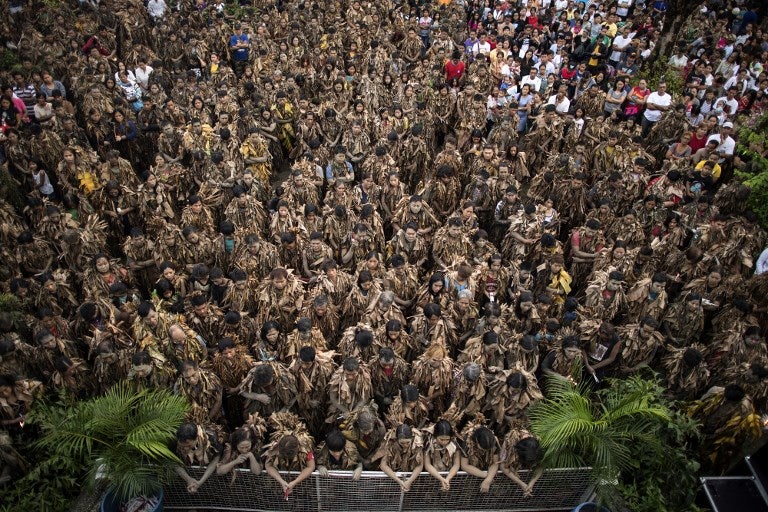 Devotees wearing costumes made of banana leaves attend a mass as part of a religious festival in honor of St. John the Baptist, also known locally as the "mud people" festival, in Aliaga town, Nueva Ecija province, north of Manila, on June 24, 2018. Farmers coated in mud paraded in Philippine villages on June 24 to mark one of the Catholic nation's most colourful religious festivals. / AFP PHOTO / NOEL CELIS

LOOK: Quite a mud-dle! Filipino devotees bathe in soil

ALIAGA, Nueva Ecija – They say there’s nothing quite like it for cooling the blood, but for more than a thousand Filipinos at a Catholic festival on Sunday, slathering their bodies in mud was a way to show devotion and humility.

The annual tradition forms part of a joyous religious festival honoring a saint they believed saved residents from execution by Japanese soldiers during World War II.

Men, women and children sat in soggy rice paddies before dawn in the town of Aliaga, 100 kilometers (60 miles) north of Manila, covering each other in muck before donning dried banana leaves in the annual “Mud People” festival.

A tradition that draws the faithful and tourists alike, the event celebrates the feast of John the Baptist with devotees taking part in what they see as an act of humility and penance that imitates a saint who preached and lived a life of poverty in the desert.

“I got goosebumps when I joined the festival. The Lord is showering us with love,” 35-year-old businessman and village official Win Javaluyas told AFP.

“I am so happy. This is one way of being closer to God, to purify your intention and be holy.”

The Philippines is Asia’s Catholic bastion with a flock of more than 80 million. Spain colonized the archipelago in the 16th century and spread the faith.

The “Mud People” festival, believed to have begun more than a century ago, became much more prominent after 1944 during Japan’s wartime occupation of the former US colony, local priest Elmer Villamayor told AFP.

Residents say Japanese soldiers were about to execute men in Aliaga to avenge the death of their compatriots when a heavy downpour broke out, forcing the troops to scamper away in what villagers saw as a miracle.

Grateful locals, who rolled happily in the mud, attributed the rain to Saint John the Baptist who is associated with water.

“Some people view this event as yucky but this is a very solemn festival. People humble themselves and are sorry for their wrongdoings,” said Villamayor, parish priest of Saint John the Baptist.

Participants say their devotion has led to miracles.

“My mother was healed after suffering from tuberculosis of the bone, a rare illness. Now my wife is pregnant with twins. I am praying for her healthy delivery,” said Javaluyas. /cbb