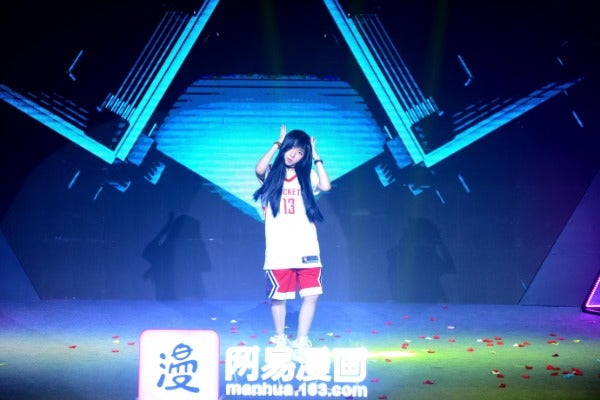 Zhaiwu refers to a trend in China that originated from the Japanese online pop culture of otaku.

It arises from the animation, comics and games, or ACG culture, which according to the search engine of Chinese company Baidu Inc, is enjoyed by some 86 per cent of Japanese.

The lore of this phenomenon’s origin abounds.

One story says it started under the odotte mita meme, which translates as “I’ve tried dancing to it”, on the Japanese video site Niconico.

Internet legend has it that Itokutora, a young girl from the performance group Danceroid, uploaded a video of herself dancing to music from the animation Melancholy of Haruhi Suzumiya at home.

Others posted similar clips－and a trend was born.

People lined up for signatures from celebrity judges ahead of a zhaiwu competition at Zhejiang University of Media and Communications in the Chinese city of Hangzhou on June 2.

Some brought professional cameras. Others purchased photos and posters.

The 13 solo or group competitors who reached the finals danced to such backdrops as Japanese animation and neoclassical Chinese music.

One judge for the contest named Yaorenmao, who has millions of online fans, is ranked among zhaiwu stars that fans “most want to meet” by Niconico.

Over 300 competitors took part in the contest.

“Yaorenmao nourishes my soul,” says 19-year-old Wang Ze, who has watched the performer for three years.

“Feelings are very subjective. They can’t be measured rationally.”

Wang watched Yaorenmao with his previous girlfriend but says he wouldn’t know what to do if a future girlfriend wanted him to quit.

Song Xiaoge, a participant in the Zhejiang university competition, says: “Yaorenmao was the first Chinese zhaiwu dancer I heard of. She’s adorable and vigorous.”

Yaorenmao, based in Chengdu, Sichuan province, chanced upon the trend in 2011.

“It seemed simple,” she recalls. “I was overjoyed.”

Zhaiwu is still a subculture. But its members are passionate, says Luo Qiandan, marketing director of manhua.163.com, which co-sponsored the competition with a Huawei Technologies Co Ltd subsidiary.

Most contestants come from bigger cities and universities that have comics clubs, she says.

Over a million people signed up on the recent event’s web page, more than twice as many as last year.

Another celebrity judge from Guangdong province, known by her online moniker, Pipi-pingping, shows how the genre can break boundaries.

She has danced to hip-hop since junior high.

A friend suggested she try zhaiwu. She did and was hooked immediately.

The ACG-dancing fan became a vlogger, sharing her dance videos on the streaming site Bilibili, starting in 2013.

“Dancers can explore lots of genres. The lack of rules is one of the main reasons I like it.”

He discovered zhaiwu at an anime expo in 2014 in the province.

Mao also believes it doesn’t fall into any genre but can fit into all expressive kinds of dance.

“So, it provides room for creativity.”

Yaorenmao’s reproduction of the dance with two other performers has received nearly 14 million hits.

One is the “Ali shuffle”, aka the “butterfly float”, named after the fighting move of legendary US boxer Muhammad Ali.

The other borrows from the traditional movements of geishas from Japan’s Edo Period (1603-1867).

Geishas were trained to walk gracefully to meet and greet guests at teahouses. That was no easy task, considering they wore over 20 kilograms of clothing and heavy geta shoes that were up to 20 centimeters high. Hence, it’s said an elegant geisha walked “as slowly as an ox cart”.

Many Chinese fans also love videos by Australian singer and actor Richard Magarey, who is known by the stage name Ladybeard. The tall, muscular man, who performs in drag, says he started dressing like a girl at age 14 and became obsessed with otaku when he visited Japan in 2011.

He says more men are participating in the predominantly female trend.

“I think people should follow their hearts and keep dancing,” he says.

“I would be happier if more people … embrace the culture and join the community. Gender doesn’t matter. Just have fun.”

Pipi-pingping is optimistic about the trend’s future in China and is working to advance it.

The vlogger is selective about the videos she uploads.

She spent three months to produce each video of one dance and interesting outtakes. Her clips are usually between seven and 10 minutes in length.

The performer gives little heed to those who believe zhaiwu is lowbrow.

“Everything is a mix of good and bad,” she says. “I just do my best to produce quality dance pieces.”

She also hopes to make it her livelihood.

“I’ll need luck to turn my hobby into an income source,” she says.