JR West unveiled the eight-car train to the media at the Hakata general rail yard in Nakagawa, Fukuoka Prefecture. The train is adorned with images of Hello Kitty, a nationally and internationally popular character with whom the company aims to attract tourists from abroad and around Japan.

The first and second cars have white and pink bodies bearing illustrations of Kitty. Their interiors were shown to the media, with car No. 1 offering passengers tourist information and car No. 2 providing an area where passengers can pose for photos with a statue of Kitty. The interior of cars Nos. 3 to 8 appears almost the same as a normal Shinkansen, but the company says that there are Kitty illustrations hidden somewhere in these cars. 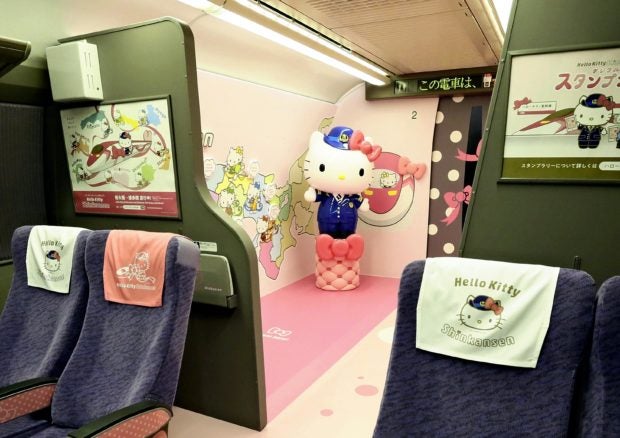 The character train will operate one round-trip a day, departing from Hakata Station at 6:40 a.m. and from Shin-Osaka Station at 11:29 a.m.  The service will be suspended from July 18-20, Aug. 8-10, Sept. 3-5 and Sept. 26-28, according to the company’s timetable until the end of September. The company said first-day reserved seats are nearly sold out.