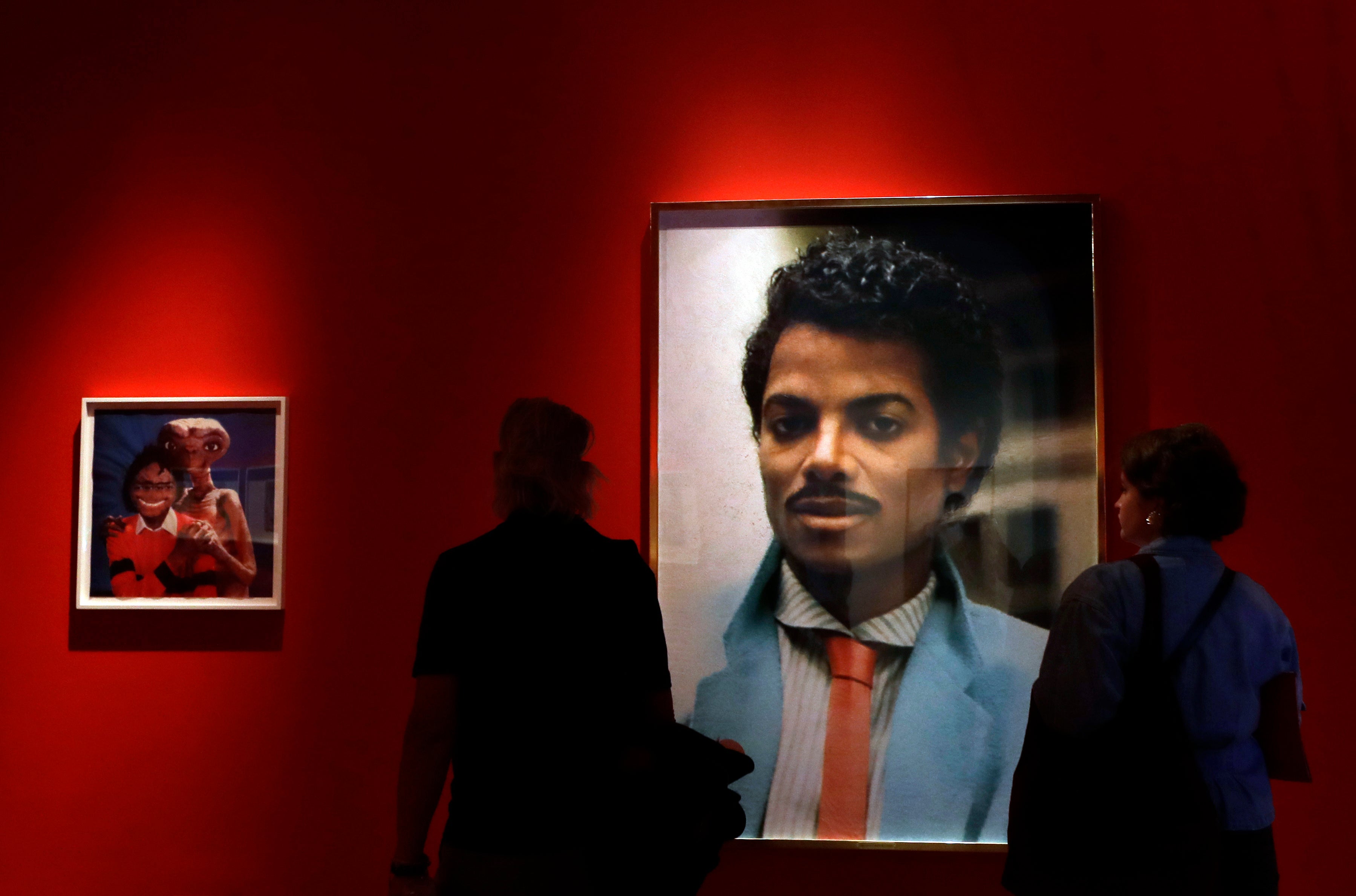 Visitors look at an artwork by Hank Willis Thomas on display at the Michael Jackson: On The Wall exhibition at the National Portrait Gallery in London, Wednesday, June 27, 2018. TA new art exhibition in London depicts Michael Jackson as a savior, a saint, an entertainer, an icon, a monarch, a mask and a mystery. The National Portrait Gallery show explores how many contemporary artists have been drawn to the late King of Pop, as an artistic inspiration, a tragic figure and a fascinating enigma. The exhibition runs at the gallery from June 28 until Oct. 21. Image: AP/Kirsty Wigglesworth

LONDON (AP) — A new art exhibition in London depicts Michael Jackson as a savior, a saint, an entertainer, an icon, a monarch, a mask and a mystery.

The National Portrait Gallery show, opening Thursday, reveals the extent to which contemporary artists have been drawn to the late King of Pop, as an artistic inspiration, a tragic figure and a fascinating enigma.

Gathering work by 48 artists from around the world, the show includes Jackson-inspired paintings, photographs, videos, textiles and ceramics. It ranges from 1980s pop portraits by Andy Warhol and Keith Haring to David LaChapelle’s depictions of a Christ-like Jackson and Kehinde Wiley’s vast portrait of the entertainer as a king on horseback.

Curator Nicholas Cullinan said Wednesday that, nine years after Jackson’s death, the show explores “how he could mean so many different things to so many people.”

Jackson had already been a child star when he became an international icon in 1983 with the release of “Thriller”, one of the best-selling albums of all time. His music, moves, style and innovations in staging and video had a huge impact on popular culture. He also struggled with the limelight, and died in 2009 of a prescription drug overdose at age 50.

The exhibition includes works that reflect on what Jackson meant to his fans, his place in African-American culture, the way he manipulated fame — and the way fame manipulated him.

U.S. artist Todd Gray, who worked for Jackson as a photographer in the 1970s and 80s, recalled him as a sweet-natured youth — “If he stepped on an ant, he would cry” — but also someone keenly aware of his image. He remembered Jackson refusing to change his mismatched socks for a photo shoot, saying: “‘People will talk. That’s what I want.”

Gray has reworked his old photos by layering other pictures over Jackson’s face, including images from Ghana, where the artist has a home.

“It’s my way to place Michael in the African diaspora,” he said.

The show has the support of Jackson’s family, though not all the works are flattering. American artist Jordan Wolfson shows nothing but Jackson’s darting, blinking eyes, taken from a 1993 TV interview in which the star denied child molestation allegations.

Several works depict Jackson in a mask, most famously Mark Ryden’s cover art for the “Dangerous” album. Isaac Lythgoe has turned that image of Jackson’s masked eyes into a plush headboard.

Other images are heroic. German artist Isa Genzken juxtaposes Jackson and Michelangelo’s David. Wiley — who has also painted Barack Obama’s official portrait — depicts Jackson in armor on horseback, in a painting modeled on Peter Paul Rubens’ portrait of King Philip II of Spain. The portrait was the last one Jackson commissioned, and was completed after his death.

One work, filling a whole room, focuses not on Jackson but on his fans. South African artist Candice Breitz filmed 16 German-speaking Jackson fans of myriad ages and races, singing “Thriller”. It’s an engaging and moving work that shows just how much Jackson means to those who love his music.

Scottish artist Donald Urquhart, who created an illustrated Michael Jackson alphabet for the exhibition, thinks Jackson’s “manipulation of fame” has inspired many artists. But he says Jackson will be most widely remembered for his boundary-crossing music.

“I’ve been to tiny villages in Sumatra where they just play Michael Jackson all day long,” Urquhart said. “They don’t speak English, but there’s something in his music that is beyond language.”

“Michael Jackson: On the Wall” runs in London from Thursday until Oct. 21. It moves to the Grand Palais in Paris from November to February, then travels to the Bonn, Germany and Espoo, Finland. CC