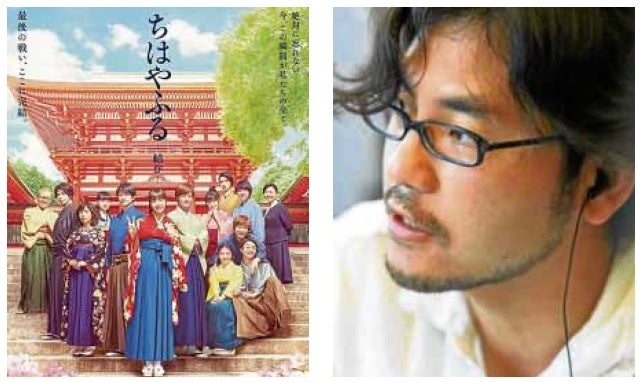 Norihiro Koizumi (right)writes and directs the three films based on Yuki Suetsugu’s popular manga about a young competitive “karuta” player.

The three-part live-action film adaptation of a popular Yuki Suetsugu manga, “Chihayafuru,” is among the highlights of the 2018 Eiga Sai, the annual film festival organized by the Embassy of Japan and Japan Foundation Manila.

A study on youth and friendship, the manga-turned-film is about Chihaya Ayase (Suzu Hirose, whose film debut was in Hirokazu Kore-eda’s 2015 Cannes entry “Our Little Sister”), a schoolgirl with a passion for the traditional, poetry-inspired Japanese card game called karuta.

Series director and screenwriter Norihiro Koizumi will be in Manila for Eiga Sai’s July 4 opening night to present the final instalment, “Chihayafuru: Musubi.” It was released in Japan in March, two years after parts 1 and 2 reportedly opened to blockbuster success.

At just 37 years old, Koizumi has produced commercial hits including his first full-length feature (2006 drama “Midnight Sun”). Critics have praised his deftness in capturing emotion, as well as his ability to lift young unknown actors out of obscurity. The filmmaker will lead a forum on July 6 at the Ateneo de Manila University’s (ADMU) Escaler Hall.

The fest offers 15 films this year, among them “Of Love & Law,” Hikaru Toda’s documentary about the legal limitations faced by LGBT couples in contemporary Japan. Toda will be at its Manila premier and Director’s Talk on Aug. 4 at Cultural Center of the Philippines (CCP), made possible through an alliance between Eiga Sai and the Cinemalaya Independent Film Festival.

On Aug. 5, the documentary will be shown at Cinematheque Center Manila, followed by a forum on gender inclusion organized by Japan Foundation Asia Center: EYES for Embracing Diversity, the Philippine LGBT Chamber of Commerce and Film Development Council of the Philippines.

The five-city Eiga Sai tour, which runs July 4-Aug. 26, will screen Akira Kurosawa’s “Seven Samurai”; “Let’s Go, JETS! From Small Town Girls to US Champions?!,” inspired by real events surrounding a high school cheerdance team that won the US Championship; “Survival Family,” a comical drama about how to exist in a world without electricity; “Honnouji Hotel,” a fantasy movie set in 16th-century Kyoto; feline-centric animated film “Rudolf the Black Cat”; crime thriller “Memoirs of a Murderer”; and “Tora-san of Goto,” a documentary that follows a family of udon makers for over two decades.

Adaptations figure heavily in this year’s festival. Besides the “Chihayafuru” trilogy, there are “Tori Girl” (based on the Ko Nakamura novel “Torigirl”); “ReLIFE,” the live-action film version of a manga that’s also been adapted into animé and for the stage; “Daytime Shooting Star,” Mika Yamamori’s shoujo (Japanese content aimed at teen girls/young women) comic turned into film; and “When the Curtain Rises,” the celluloid version of a novel by theater veteran Oriza Hirata.

Playwright and stage director Hirata will conduct a forum on Aug. 17, 7 p.m., at CCP Dream Theater. His work, “Tokyo Notes,” will have a Tanghalang Pilipino adaptation to be staged in December.