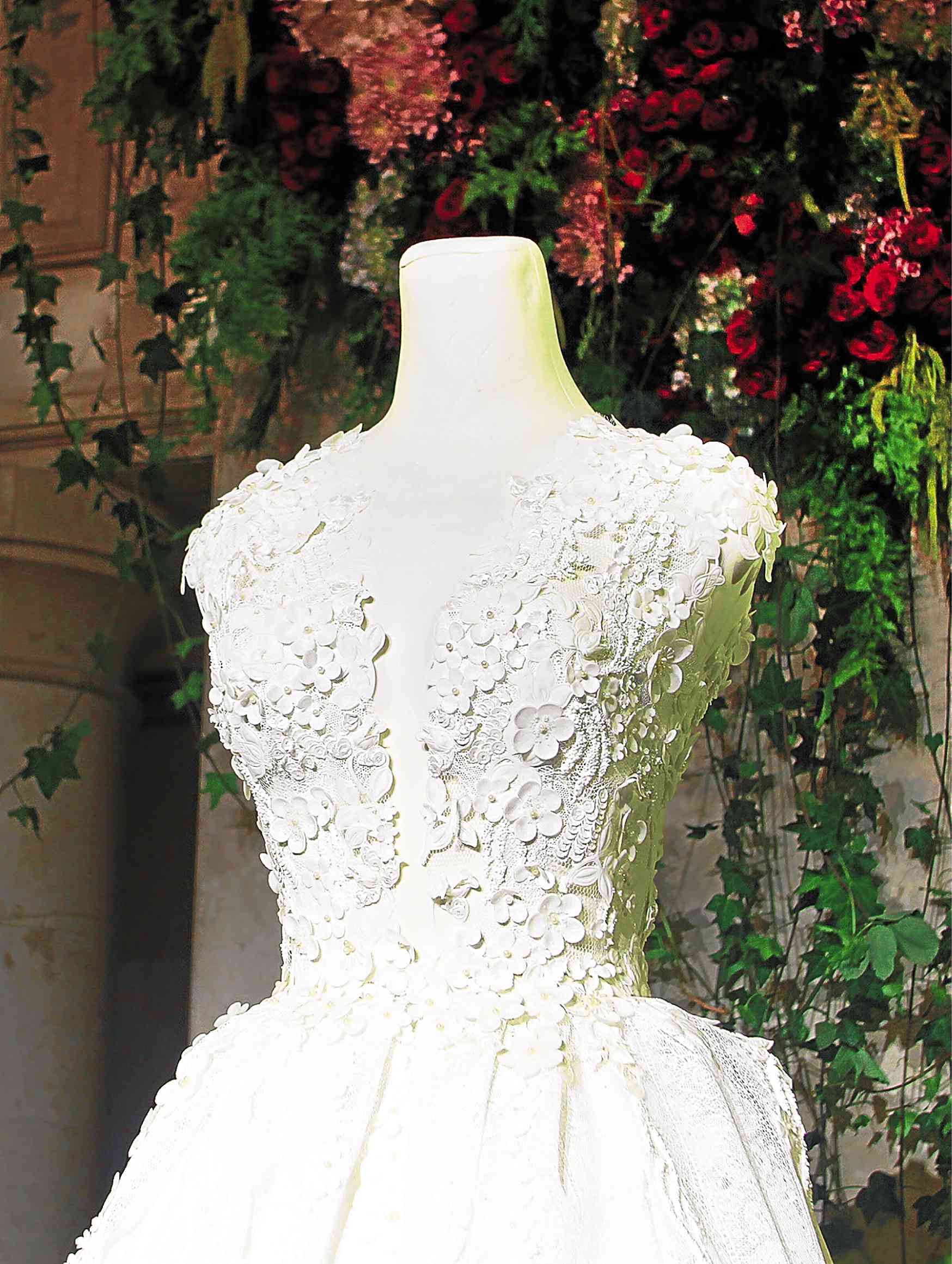 The torso of the cake is made from the mold. The edible flowers and lace were labor-intensive –PHOTOS BYNELSONMATAWARAN

Believe it or not, a 7-ft-high, P2M bridal gown cake

Cake decorator/restaurateur Faridah Yussof flew in from Brunei to promote her rare expertise in the hotel’s recent wedding fair.

The price of the cake was approximated at P2.2 million. Yussof underscored that the bridal gown cake would have cost less if she was based in the Philippines.

She explained that the cost included the airfare of her and her four-man team, their accommodations, living expenses and incidentals, on top of the ingredients and labor. Still, the cake would fetch seven figures since ingredients alone cost at least P800,000.

A restaurateur, Yussof is also an accredited tutor of the Paul Bradcroft Sugarcraft School and the Wilton Method for cake decorating.

Wedding cakes today are more about high-impact decoration rather than the sweet finish to a reception. Bridal gowns are one of the trends in the wedding cake design.

Yussof started making five-ft-high bridal gown cakes in Brunei bridal fairs. She would lecture on the making of the cake, share sample pieces with the audience, and hoped to get clients.

The baker favors butter cake as a base for the long shelf life. For the ganache, Belgian chocolate and cream are mixed to make a smooth and seductive icing and filling.

The cake is coated with fondant, a stiff layer of chocolate, sugar and stabilizers.

The sugar lace is made of special confectionery ingredients, and involves hours of mixing and setting. The cake is enhanced with edible frills that mimic wedding gowns.

Aside from the labor-intenstive process, transporting the cake from the bakery to the trade fair could be a logistical nightmare. She recalled how in Brunei, during the transport, the cake lost its body and ended up with crevices.

The Brunei wedding market is still in its infancy, not as elaborate and grand as in the Philippines.

Last year, she approached foremost wedding planner Rita Neri, who suggested that she introduce her rare culinary artistry to the Philippine market.

In Brunei, Yussof bakes the cake herself. “I am an architect, engineer, baker, decorator and manager. I am managing a team to make sure they know what they are doing. The logistics and the work are endless,” she said. A Filipino assistant, Leah Obcinal, weighs all the ingredients for her.

It takes two weeks to make a five-ft-tall bridal gown cake, but here at Peninsula, Yussof had only five days to work on the seven-ft-tall wedding cake.

Yussof was advised to tap a culinary school to bake the skirt which was made of chocolate and butter cakes and the ganache. Every layer was covered with chocolate ganache, following her technical drawing.

Before the Peninsula bridal fair, she spent three weeks in Brunei producing over a hundred sheets of delicate sugar lace to embellish the gown. The cake skirt was topped with these edible panels of sugar lace that were neatly pleated.

“To keep the skirt fluffy, I have to line it with tulle. That is the only part of the cake that is not edible. If I don’t put the tulle, the lace will stick to the cake in this humidity. You won’t see the pleats,” she explained.

The torso was set on a mold, shaped like a mannequin’s body. “I normally shirr the torso from a block of melted chocolate and breakfast rice cereal, but it takes a whole day.

“To save time, I made the mold at home, brought the rice cereal, melted the chocolate, compressed it into a mold. Once the torso is molded and dried, I coated it with ganache to make it smooth. Dark chocolate is the best for this weather. After the ganache, I cover the cake with white fondant,” Yussof said.

Like a tailor, she measured the torso’s proportions, including the bustline and the shoulders. The tulle and sugar lace were set on the bust, followed by more intricate embellishments.

“There is a technique where I brush certain parts of the lace so it will look like a sexy, transparent top. Then I put flowers and vines which where made two weeks ago. The tiny pearls were piped in while the edible sequins were reeled into the lace. Everything is all in my head. There are no patterns to follow,” she explained.

Producing a high-impact bridal gown cake in Manila had its challenges. For instance, the fluctuating temperature at the lobby created some cracks and melted the flowers. Fortunately, the torso and the waistline held up until the end of the fair.

On her Manila experience, Yussof found her experience very humbling. “It taught me patience.”