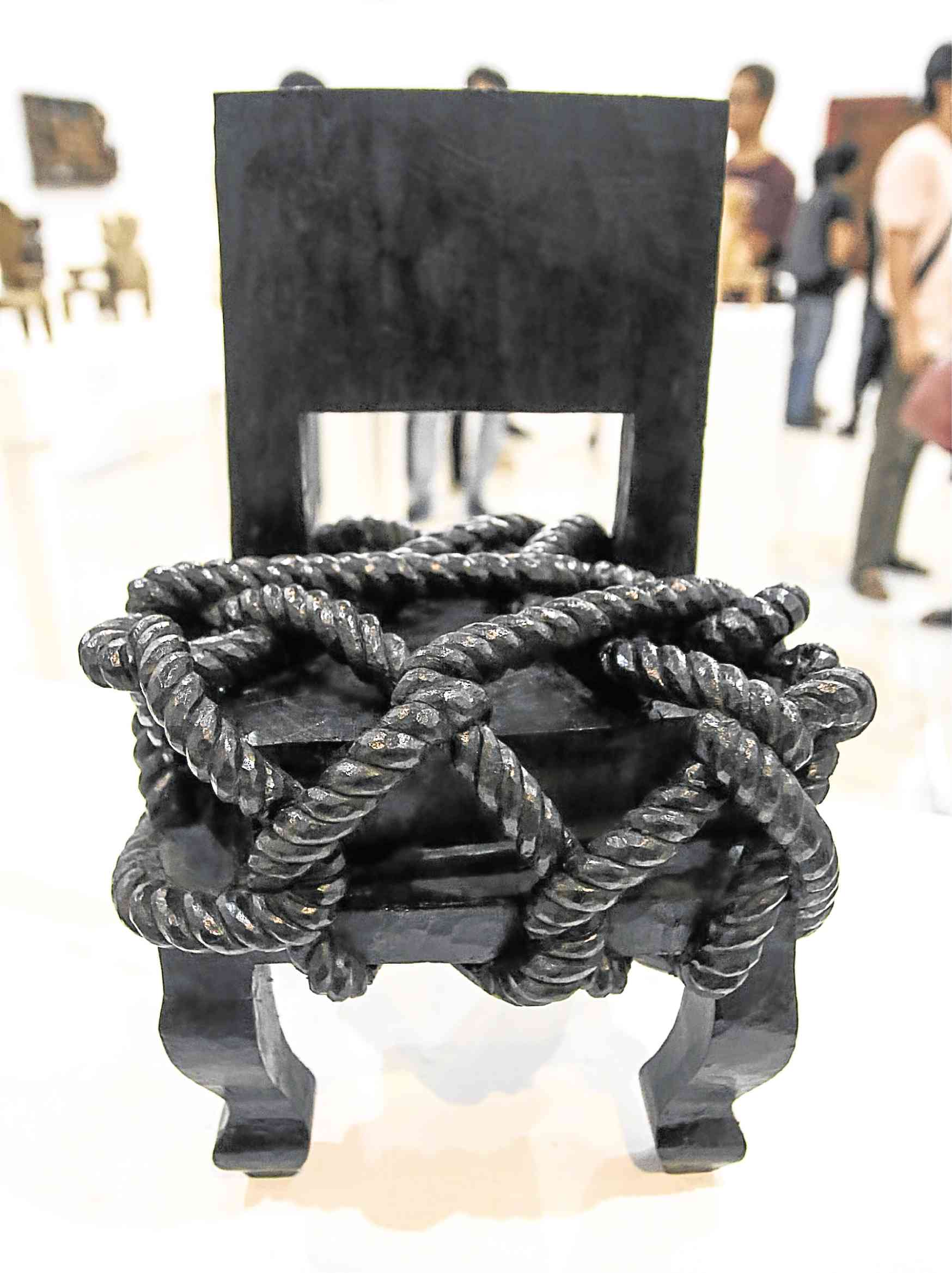 The arts scene is bustling not only in Metro Manila, but also apparently in the Visayas, in Iloilo specifically, where we visited two weekends ago for the inauguration of Megaworld’s Festive Walk Mall in the Iloilo Business Park, Iloilo City.

Not only is the Ilonggo arts scene alive—there’s an art event almost every day, we were told —it also exudes a vibrancy and freshness that a heating-up, commercialized art scene of Metro Manila could be losing.

On an impulse we accepted the invitation of leading artist Rock Drilon to attend the opening of “Salvage,” a three-man exhibit at gallery i in Calle Real, our first time in that old part of town.

After having been part of the artist generation that helped shape modern Philippine art in the ’80s and ’90s—the group influenced by National Artist dean Jose Joya and which included Nestor Vinluan, Lito Carating, Benjie Cabangis—Drilon has returned to his roots, Iloilo, where he’s become active not only in the arts but also in movements to advance Ilonggo heritage preservation and protect the environment.

“Salvage,” which opened June 29 and will run until July 24, showcases the wood art of Jeanroll Ejar, Jun Orland E. Espinosa and Tyrone Dave Espinosa—young (pardon us for using youth as a defining adjective, but that’s a fact) artists who have been known to work with salvaged wood and discards, both as material and potent, complex symbol.

They’re used to working with wood, Ejar particularly in his family’s furniture shop, and transforming it into a powerful, yet whimsical, angst-filled statement of their—our—daily realities.

From debris to collectibles

In the exhibit literature, Martin Genodepa, an academician from the University of the Philippines and the curator of the new Iloilo Museum of Contemporary Art, noted how the three have been known to salvage debris and turn it into collectibles.

But more important, he explained how in today’s Philippine society, “salvage” has departed from its original meaning of “rescue” and “save” to come to mean to eradicate or exterminate. The society has grown used to the sightings of dead bodies in forsaken places.

The three artists use salvaged wood to convey their searing commentary of the times—powerful yet not depressing, somewhat social and political yet not clichéd, whimsical, witty and fresh. Given such layers of expressions, the wood sculptures, in this writer’s eyes at least, come out beautiful, not trite.

Ejar’s miniature chairs made from salvaged wood, one solid piece each, say what he thinks and feels about things that have come to intrigue, if not burden and define, society. The sculpture draws you in not only by its intricateness but also by its surprising twists.

Among the most striking is a black (23 x 20 x 36 cm) chair with a seat roped in (chair and rope carved out of one block of Gmelina wood) titled “Ang ’Di Mabuklat-buklat na Aklat.”
Another has its back carved like wings, titled “Nag-aanghel-anghelan.” Still another is a misshapen (surreal?) chair titled “Upuang Baliko” in teakwood.

There’s also another titled “Indigenous Throne,” the artist’s paean to indigenous peoples, made of molave, its back a carved weave with black burn marks to symbolize the fate suffered by this marginalized sector.

Mounted on one side of the exhibit hall were the small and large reliefs of Tyrone Espinosa—all made of salvaged wood. Their uniformity of size belies the unique individuality of each piece—individually powerful, that is. They’re carved chains—entangled masses that are intriguing to the beholder simply because they show no beginning nor end.

Genodepa explained in the exhibit literature: “Chains are double-edged symbols: bondage and strength. But this early, this unabashed pursuit of an image that borders on frenzy is very telling of the artist’s commitment to his personal, psychic and creative moorings.”

The visitors that night were drawn to a large relief that opened to reveal more chains, spikes and other elements of torture, if not suffering. It was titled “Kaloob-looban sa Loobin (Innermost Thoughts).”

Orland Espinosa’s sculptures of wood planks mounted on the walls, from afar, seem like random compositions of shapes and textures. Upon closer look, however, the viewer gets overwhelmed by what, in fact, they are: collages of heads or parts of faces evoking sounds. The viewer readily sees the screams, without hearing them.

Genodepa wrote, ‘They are not pretty to look at, but they are potent because his compositions are like vague sounds that are stuck between a scream and a whimper or a shriek and a groan, leaving the viewer disturbed or dazed.”

Disturbed perhaps. But they could make beautiful complexities on one’s wall. The biggest work, Espinosa told us, in fact, doesn’t represent angst or suffering, but his homage to all those who have mentored his art—like voices he continues to heed. It’s titled “Perception of Insanity.”

We were so impressed with this Iloilo exhibit; it’s fresh, and the jaded in us is tempted to say, pure.

Genodepa put it well: “Jeanroll Ejar, Tyrone and Orland Espinosa have not only salvaged materials for art’s sake; they have endeavored to salvage sculpture by thwarting the crass and the commercial.”