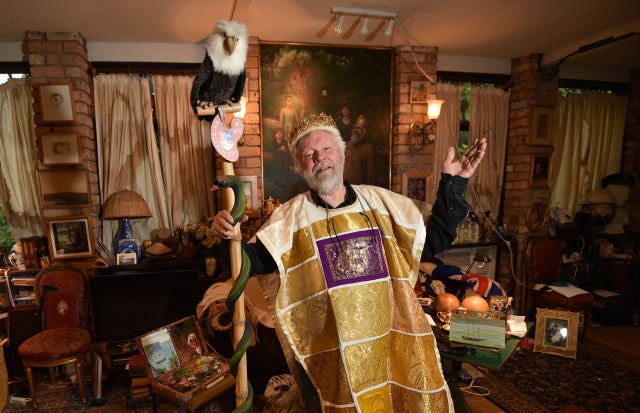 aul Delprat, 76, gesturing at his home as the self-appointed Prince of the Principality of Wy © PETER PARKS / AFP

Ruling from your home: Inside Australia’s micronations boom

Lounging on a sofa in his flowing robes, a gold crown resting on his snowy hair and a stuffed white toy tiger at his feet, Paul Delprat looks every bit a monarch.

Delprat, 76, is the self-appointed Prince of the Principality of Wy, a micronation consisting of his home in the north Sydney suburb of Mosman.

Micronations—entities that have proclaimed independence but are not recognized by governments—have been declared around the world.

One of the latest is Asgardia, started by Russian scientist and businessman Igor Ashurbeyli, who in late June declared himself as the leader of the utopian “space nation”.

But the pseudo-states are particularly popular in Australia, with the island continent home to the highest number in the world, about 35, out of an estimated total of up to 200.

“For me, it’s a passion, it’s an art installation,” Delprat, a fine art school principal, tells AFP as a large painting of himself decked out in full regalia with his wife and children looms above his head.

“My favorite artist is Rembrandt, who loved dressing up. In a world where we haven’t sorted out our differences, art is the international language… the philosophy of Wy is live and let live and above all, laugh if you can.”

Delprat’s homemade kingdom, filled with monarchical and historical paraphernalia, is, like some micronations, born out of a dispute with authorities.

Blocked by the local council for more than a decade from building a driveway, Delprat seceded from Mosman in 2004.

Instead of drawing the ire of authorities, he became a local celebrity—even attracting adoring fans from Japan.

The rise of micronations hasn’t just stemmed from the relaxed attitude of Australian governments willing to tolerate the tiny fiefdoms as long as they pay taxes.

“In Australia, there’s a strong streak of people wanting to thumb their noses at authority,” Williams of the University of NSW tells AFP.

“There is a bit of a larrikin (maverick) streak here, a sense that this can be a bit of fun… and often they are hobbies that have got wildly out of hand.”

Establishing a micronation is not without its hazards.

John Rudge, the Grand Duke of the Grand Duchy of Avram in Australia’s southern island state of Tasmania, issued his own notes and coins in 1980 after writing a Ph.D. thesis about setting up a central bank.

The government disputed his use of the word “bank” on the notes and took him to court, although the case was eventually dismissed, Rudge tells AFP.

The country’s oldest micronation, the Principality of Hutt River, 500 kilometers (300 miles) north of Perth, was set up by Leonard Casley in 1970 after a row with the Western Australia state government over wheat quotas.

Prince Leonard, who owns some 75 square kilometers (29 square miles) of farmland — an area larger than that of more than 20 bona fide states, territories or dependencies — was last year ordered by a court to pay Aus$3 million (US$2.2 million) in taxes.

Even so, the property reportedly makes a tidy sum for the now-retired prince — who handed over the reins to his youngest son Graeme last year—as a tourist attraction.

Other micronations use their realms to talk about good governance.

George Cruickshank, aka Emperor George II, established the Empire of Atlantium as a teenager with his two cousins after being horrified by “confrontational” attitudes during the Cold War.

The 51-year-old has built a government house, post office and even a pyramid on a 0.76-square-kilometer patch of farmland 300 kilometers south of Sydney.

He markets the empire on Airbnb as the only country in the world that people can rent for just Aus$100 a night, and uses his fame to promote his progressive, globalist agenda.

“The moment I put on medals and a sash and I become George II, Emperor of Atlantium, suddenly the media is interested by what I have to say,” Cruickshank, who runs a Facebook group for micronation leaders, tells AFP.

“I think the world generally is taking a temporary step backwards with this nativism, localism, Trumpism, Brexit.

“Micronations offer a possibility to say, ‘Stop, take a step back, how could things be made better than they are now?’.”

The concept of sovereignty has also been a source of contention for Australia’s Aboriginal population.

The “First Nations”, whose cultures stretch back tens of thousands of years, were driven off their lands when British settlers arrived in 1788.

“They’ve never agreed to be dispossessed from those lands. In fact, many still reject the idea that the Australian nation was created on their lands,” Williams says.

“They do often look at asserting their sovereignty through micronations and the like, because they want a better and more just settlement for them and into the future.” MKH