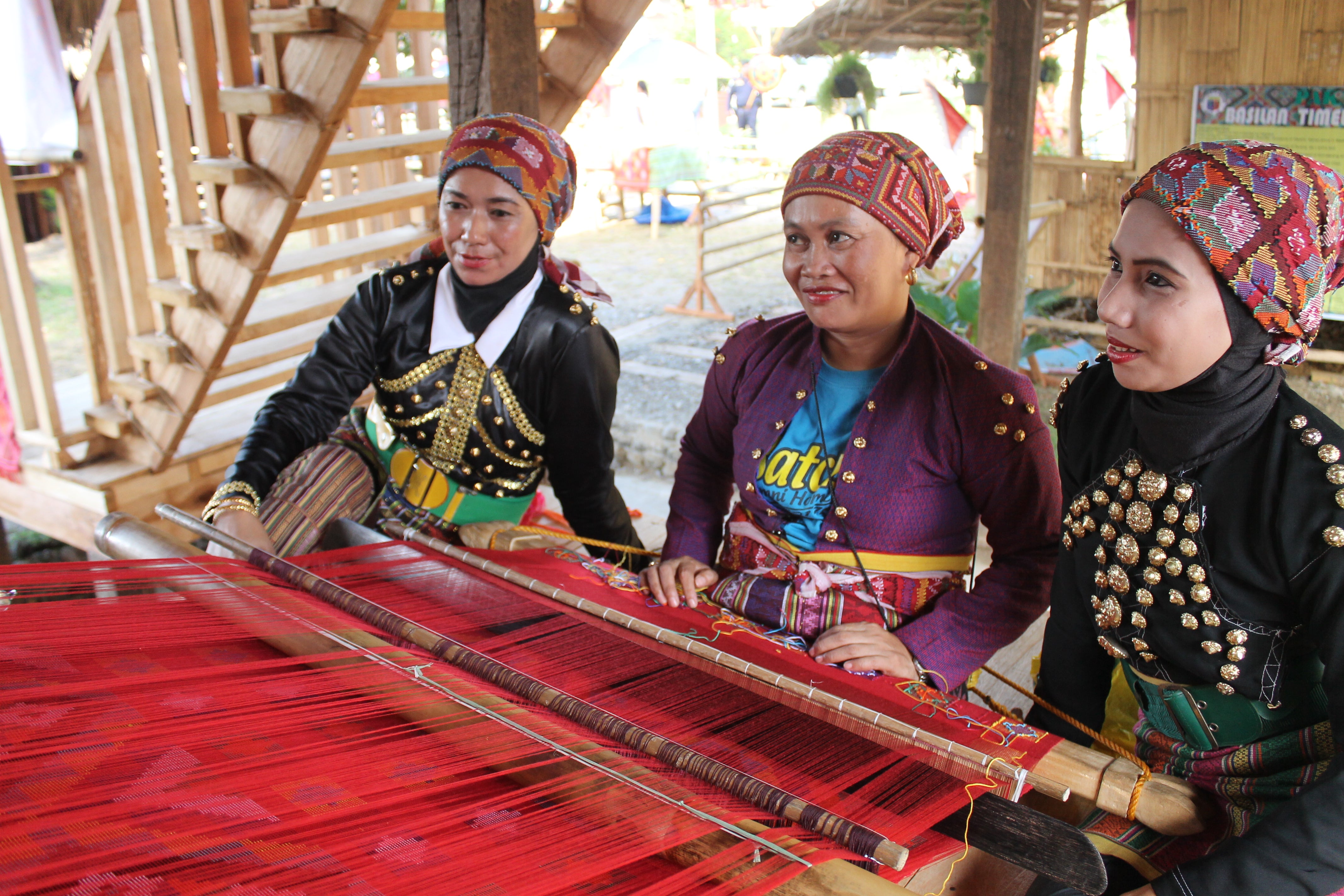 Basilan’s traditional weavers provide visitors with a demonstration of their skills.

ARMM is creative, too

The colorful, thriving culture of Muslim Mindanao is showcased in Cotabato City with a grand festival marking the 29th anniversary of the Autonomous Region of Muslim Mindanao (ARMM). The celebration consists of various events to be held from July till December.

The festival, dubbed “2018 Pakaradjaan sa ARMM,” is organized by the office of ARMM Gov. Mujiv Hataman. It’s being held on the open grounds of the Office of the Regional Center (ORC) complex in Cotabato City, seat of the ARMM government since 1990.

ARMM is composed of the provinces of Basilan, Lanao del Sur, Maguindanao, Sulu and Tawi-Tawi.

Hataman said that past ARMM anniversary celebrations have always focused on Bangsamoro heritage—its history, culture, arts and tradition. “We present the rich ethnicities of the various provinces and tribes that comprise Muslim Mindanao,” he said.

“This celebration serves as a constant reminder of our unique customs and traditions, which must remain strong and alive for our future generations to appreciate and further cultivate,” he added.

“The old traditions of other provinces in the Philippines are dying, because only a few members of the younger generations are willing to nurture them. The rest of them have chosen to migrate to the big cities.”

In contrast, much of the beloved customs of Muslim Mindanao have remained intact as the older generation has been able to pass them on to the young.

For example, Hataman cited the legendary weavers of the Yakan, who hail from his own province, Basilan. He proudly noted how the woven products—which include baskets, costumes, home and fashion accessories—have been quickly gaining national and international recognition and prestige.

This year’s festival is as opulent as ever, as the grounds of the ORC complex in Cotabato City have been transformed into a Moro village, with life-size replicas of the typical house found in five of the six member provinces of the ARMM.

Each province and tribe are represented in the village through a house built and decorated by their respective local government units (LGUs). The houses serve as giant booths, designed to provide a full representation of the culture of each province.

This is both an exhibition and a competition—the winning house to be chosen at the end of the festival in December.

The house of the Yakan from Basilan showcases the stunning products of the legendary weavers. Like a typical bahay kubo, the living quarters of a Yakan house is on the second floor, which is adorned with the Yakan’s products.

The Yakan house is modest in size, the sleeping quarters and the living area contained in one large room. On display are banig, table runners, baskets, blankets and pillows of various colors. These accessories make this replica one of the most resplendent houses in the village.

On the ground floor, Basilan’s traditional weavers give visitors a demonstration of their skills. Among the weavers is Juhavy Amara, who was taught the art of weaving by her grandmother. She has memorized every design that she has learned and can effortlessly recreate any intricate pattern without having to study or review the blueprint.

Next to the weavers is a small makeshift restaurant that serves dishes from Basilan. They’re cooked and prepared by two ladies, Nursidra Idris and Misra Indasan, who own a restaurant in their home province. Their specialty, served boodle-fight style, consists of a mound of malagkit na kanin surrounded by kaliya (chicken cassava with gata), tulingan (fish) and talong with okra, among others. The rice is topped with a boiled egg.

The neighboring house recreates the living quarters of the Tausug sultan in Sulu. The replica is large, although the main focus here is the sultan’s living quarters, which is bedecked with carpets and colorful wall décor, and furnished with a big bed.

It’s not used as a private bedroom since the sultan is said to receive visitors in this room. The host sits on the bed while guests sit on banig and partake of the food in latal containers at the foot of the sultan’s bed.

Unlike the Yakan house, which evokes a serene atmosphere, the Tausug home is lively with flashy colors.

The house of the Maranaos of Lanao del Sur also has rich colors though different in style. It has a more somber theme, with antique hardwood furniture.

It is different in the sense that the resident greets guests in a living room where coffee and local delicacies are served in a latal and silverware. There are framed pictures called the dadakatan in gold color.

The Maguindanao house is luxurious. Except for the door entrance, no wooden floor or wall is exposed. Every inch of the room is covered with banig or glittery wall décor.

Like the Sulu house, this has an elaborate bed for the Maguindanao sultan and layers of banig where guests relax.

The room has more than a dozen latal containing local delicacies. Spread across the room, the latal resembles a buffet. Anyone who visits the sultan is welcome to eat.

As with the other Moro tribes, the food in Maguindanao is always served with eggs. It’s said that eggs are to the Moro what noodles are to the Chinese. Eggs symbolize long, healthy life, happiness and good luck.

The Tawi-Tawi house is spartan by comparison, but it’s no less imaginative. It is the home of the Badjao who live a life of simplicity.

Since fishing is the main livelihood, the replica home recreates the look of a typical house in a fishing village. It sits by the sea on stilts surrounded by wooden planks and piers. Beyond the house is a model of the famous mountain of Tawi-Tawi, Bud Bongao.

All events will be held at the ARMM compound in Cotabato City and are open to the public.