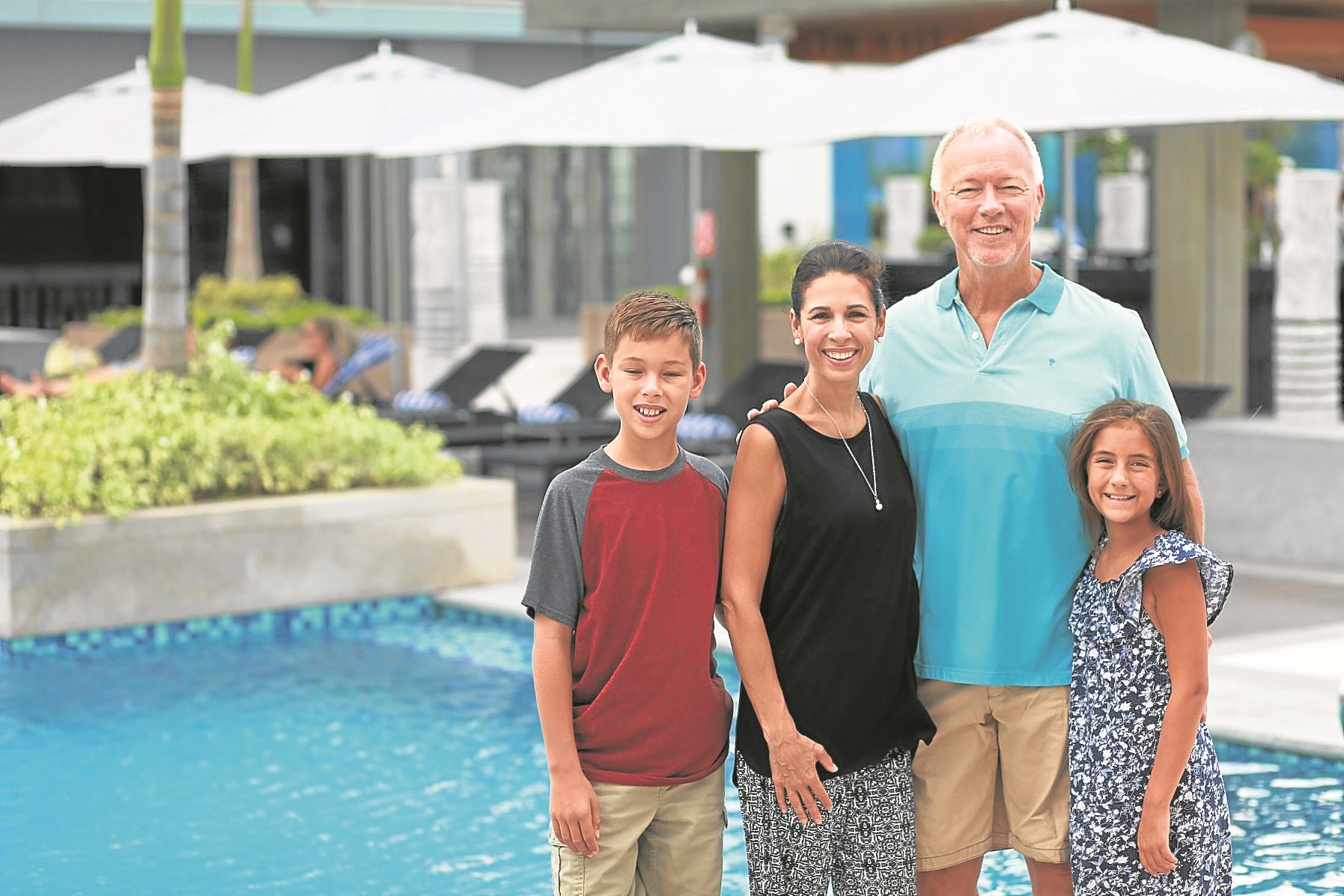 Roy and Carrie Meyer with Cody and Samantha at the poolside

Since November 2017, an American family has been living a nomadic lifestyle after disposing all its members’ possessions in California.

Business development consultant Roy Meyer and his wife, Carrie, and two children took a leap of faith and called themselves the Wingin’ It Family. They’ve traveled from India to Maldives, and now to Iloilo, going where Roy’s business brings them.

When Courtyard by Marriott Iloilo opened in May, the Meyers loved the excitement of staying in the first international-standard hotel in Western Visayas. The family is the new hotel’s first long-staying guests, intending to make Courtyard its home till September.

“We love to travel. We wondered what it would be like if we sold everything. We didn’t have any bills, any attachments. We were free to go wherever we wanted,” said Roy. “We’re just paying to live where we are at.”

The Meyers are no strangers to Iloilo. They have been to the province many times on the invitation of Roy’s virtual assistant, an Ilongga. As a consultant, Roy handles international clients, mostly in real estate. One of his accomplishments was providing job placements in the US for 200 Filipinos.

Carrie, on the other hand, is a sign language interpreter and an entrepreneur, creating fashion jewelry. When the Meyers uprooted, she’s been guiding their children Cody and Samantha and producing videos and content for their blog The Wingin’ It Family.

Roy pointed out it was important that Courtyard by Marriott Iloilo had strong internet connection for work.

The Meyers are booked at the junior suite, equipped with extra beds for the kids.

Carrie insists that the children follow a structure. She, Cody and Samantha head down to the breakfast buffet at 9 a.m. to indulge in their favorite pancakes and bacon.

They also appreciate the local fare of molo and bachoy stations. The hotel, by the way, also serves other Ilonggo dishes such as chicken inasal and sikwate tsokolate on special request.

Back in the living room of their suite, Carrie makes sure Cody and Samantha follow their home-school schedule for four hours. The conscientious mother takes care of her children’s physical education, like swimming or hitting the gym. In the afternoon, the children practice arts and cursive writing in the suite with her.

Meanwhile, Roy said finding a location for his mobile office at the hotel had been a tough choice. He could work in the suite that opens to the Iloilo Business Park, or the executive lounge on the 15th floor which overlooks the bay and Guimaras Island. He also had options to slug his laptop by the poolside or at the bar area.

“He does it on purpose. We never know where he is going to be,” said Carrie. She and the kids made a game, “Search for Daddy,” in which they hunt for his whereabouts in the morning.

For Cody and Samantha, life’s been a long holiday. Unlike in the US where they made their beds and shared household chores, they have grown accustomed to the housekeeping department to tidy up their suite, and enjoying the food in various restaurants.

The Meyers have gotten to know the hotel staffers on a more intimate level. “They are like family. They know our names and they always break into a smile when they welcome us,” said Cody.

Samantha joined a sleepover with Justine, daughter of Courtyard general manager Cleofe Albiso, and another friend. Asked what it’s like to have a sleepover in a hotel, Samantha said: “It’s different because it didn’t have toys.” Still, the girls stayed up listening to music, doing dance-offs and chatting until 5 a.m.

To balance their pampered lifestyle, the Meyers do community work in poor communities in Lanit and Pavia.

The Meyers had been roughing it up abroad until they came to Iloilo. Roy observed that the Courtyard by Marriott Iloilo has more flair than the American counterparts.

“This is more luxury,” he said, referring to the hotel’s swank finish, the orthopedic beds and pillows, the big bathrooms and the well-appointed restaurants and bar, the extensive menu and the service that combines American efficiency with Ilonggo warmth.

Ilonggo hospitality is pervasive at Courtyard by Marriott. Staffers go out of their way to make guest experience memorable.

Executive chef Chachpol Suaisom, a Thai national, personally tries to understand customers’ preferences. He can even whip up dishes that aren’t on the menu, and give a private cooking class on request. His cuisine ranges from classic French to Thai food.

For him, Thai food conjures memories of his mother, his mentor, and the family’s restaurant called White Lotus in Bangkok.

Thus, the hotel menu includes his recipes such as the pad Thai and beef salad.

During our stay, he prepared vegetarian dishes such as grilled romaine and tofu salad and fresh vegetable spring rolls.

In a private cooking demonstration on Thai food, he explained how the dishes were based on a medley of herbs and fragrant vegetables instead of dried spices. A dish might feature a combination of chillies, lime leaf, brown sugar for kick, pepper and coriander seed.

A salad of grilled lettuce, carrots, mushroom, pepper, cucumber, feta cheese, honey mustard and a touch of balsamic vinegar would have the robust combinations of the salty, sweet and sour found in Thai dishes.

Although the hotel doesn’t organize tours, Daisy Aguilar, the events manager, took us around to her home province, Guimaras, a 40-minute trip from the hotel. Aguilar said she found it relaxing riding on the boat to and from Iloilo.

The pool attendant offered to clean up the pool before dawn, just so we could do some laps before heading back to Manila.

In the end, the hotel guest experience is mainly about the staff that enables guests to leave with a lasting good impression.