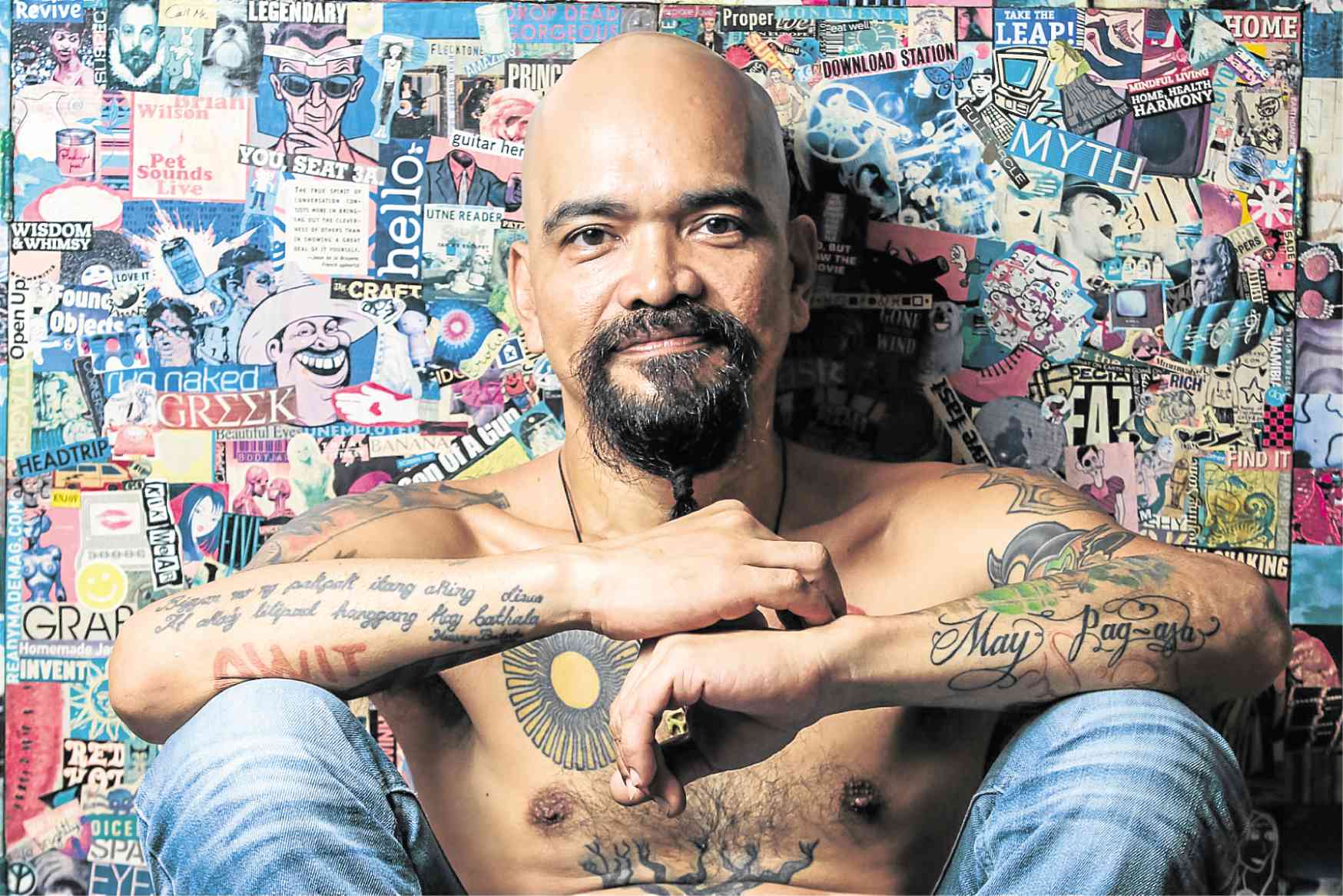 ’I am an anarchist,’ says Abay. -LEO M. SABANGAN II

Come July 23, I won’t be listening to President Duterte’s State of the Nation address.

The last thing I want to spend it on is some politician reading from a script written by some government hack saying how fine and dandy everything is.

No, I’ll have my headphones on blasting Dong Abay’s latest album, “Humanidad.”

If nothing else, it might offer an alternative view of what’s really going on.

This is a guy who thought Cory Aquino was oppressive, so you can just imagine what he makes of the Philippines under Rodrigo Duterte.

Abay pretty much lets the cat out of the bag with the two-minute punk-rock blast of “Oligarkiya,” the opening track:

There’s plenty more where that came from, including “Dasal,” a cynical view of war based on Mark Twain’s “The War Prayer.”

But “Humanidad” also offers a glimpse of Abay’s more “sensitive,” hopeful side, with such songs as “Vulgares,” based on a Spanish poem, and “Bahaghari” from the poetry of Pete Lacaba.

It’s a surprisingly cohesive effort, considering that the songs were written over a period of more than 20 years.

“I’ve been gathering songs for decades,” Abay says in Tagalog.

“I wrote them during different periods, from FVR, Erap, Gloria, PNoy to Duterte. I realized over a long period that I’m really an anarchist, I don’t believe in government. It’s already 2018, but the conditions of our society haven’t changed, it’s the same ills, the same struggles. That’s because the problems of the Philippines are systemic, it’s the system that’s questionable.”

As the title suggests, Abay feels that hope lies not in politics or ideology, but in recognizing our basic humanity.

Shaven-headed, heavily inked, and with a pointy beard that reaches down to his navel, the wiry Abay looks like a devotee of death metal or some satanic ilk.

But what he really is is a protest singer, in the best tradition of his early influences: Gary Granada, Susan Fernandez Magno, Rom Dongeto of Buklod, Ang Grupong Pendong, Joey Ayala, among others.

Two of his tattoos are of special significance to Abay. Down one forearm is a quill, on the other a microphone, representing the twin poles of his art: songwriting and performance.

“Language is what I invest,” he continues. “I speak in a language people understand. If you ask me, I’m happy that I’m still able to make music and write songs. Somebody asked me if I wanted to be a national artist, I said ‘I’m an international artist.’ I’m an artist in the world. It’s not only Filipinos who can appreciate my music. That’s why I changed my hashtag from ‘Filipino music’ to ‘music from the Philippines.’”

It’s reassuring to know that the 47-year-old Abay has lost none of his sardonic edge. If anything, it’s even sharper now that he has a super-tight band of excellent musicians to pound the message home.

The four met at one of Gang Badoy’s RockEd outreach programs, discovered certain synergies once they started playing together, and became D.A.M.O. in 2014.

“These guys’ commitment to music is awesome,” he says. “I’m really enjoying being in a band now, the creativity is on another level.”

It was the band’s decision to make “Oligarkiya” the first track.

“We wanted to make a statement right away and then move on,” Abay says. “That first song is like a state of the nation. At it’s core is the question: What democracy? The system is oligarchy.”

Since he first burst on the scene as lead singer and songwriter for Yano in 1994, Abay’s social critique has been, as the Brits say, spot on.

“Kumusta Na?” debunked the myth of Edsa ’86 so devastatingly it became an  anthem for various disaffected groups, from die-hard NatDems to Marcos loyalists and every political stripe in between. It’s become what Abay calls an “occasional song,” trotted out every February on the anniversary of Edsa (although he does push back on social media against its appropriation by the Marcos loyalist crowd).

I could think of no more concise response to the recent contretemps between our blasphemous commander-in-chief and the wardens of the Church than the last line of “Banal na Aso”: “Natatawa ako, hihihihi!”

Abay’s screed against sanctimonious hypocrisy became a surprise hit at the height of the “alternative” music era from the mid- to late-1990s.

While still a student at the University of the Philippines in the early 1990s, Abay joined the agit-prop performance group Patatag, a fixture at Leftist rallies.

“But I did not immerse myself in the grassroots,” he recalls, nor did he need to. The failures of Edsa 1986 were all around him.

Abay’s response was to form Yano with guitarist Eric Gancio and Bagong Lumad bassist Onie Badiang. The band’s name was taken from an archaic Filipino word for “simple,” but Yano was anything but. Abay’s lyrics railed against religious hypocrisy (“Banal na Aso”), the failure of democracy (“Kumusta Na?”), politicos (“Trapo”) and the upper crust (“Coño Kapre”). They seethed with authentic underclass rage in songs such as “Tsinelas” and “Esem.”

Coming right at the heels of the success of the Eraserheads, Yano was swept up in the “alternative music” boom of the 1990s. Audience riots during provincial concerts became a regular occurrence.

Then just as suddenly, it was over.

After two more albums in as many years, neither of which scaled the heights of their debut, Yano folded.

Battling what turned out to be clinical depression, Abay retreated to his room for the next five years.

“I felt like a machine,” he told this writer shortly after his recovery. “I stood there before the audience, then I’d open my mouth. It wasn’t fun at all.”

He taped up his windows and lived in almost total darkness. A psychiatrist prescribed Prozac, but nothing seemed to pull him out of the deep psychic hole he was in.

In the end, there was nothing to do but ride out this “dark night of the soul.”

After five years in a near-vegetative state, Abay healed himself with his art, picking up a guitar and writing the songs what would become “Parnaso ng Payaso,” an allegorical tale of a rag doll who wanted to become human.

Abay formed a new band he called Pan, and released the “Parnaso ng Payaso” album in 2002, opening with the life-affirming blast of “Mabuhay.”

The song “Perpekto” from “Flipino” has become a surprise YouTube hit.

In recent years, Abay has expanded his horizons into the visual arts and film. He wrote “Ama Namin” for the Erik Matti film “Honor Thy Father,” and is working on songs for the director’s much-awaited sequel “On The Job 2.”

What surprises him, says Abay—now the father of a teenage son himself—is how his audiences have grown with him, specially in the provinces where D.A.M.O. is very much in demand for concerts.

“Humanidad” is a mature work by a mature artist, but thankfully one who can still get pissed off from time to time.