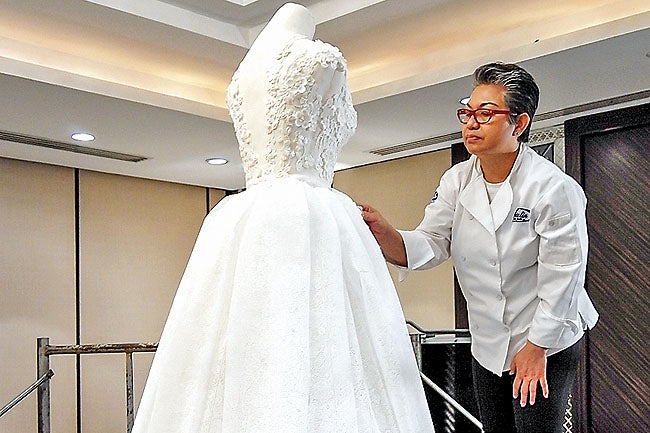 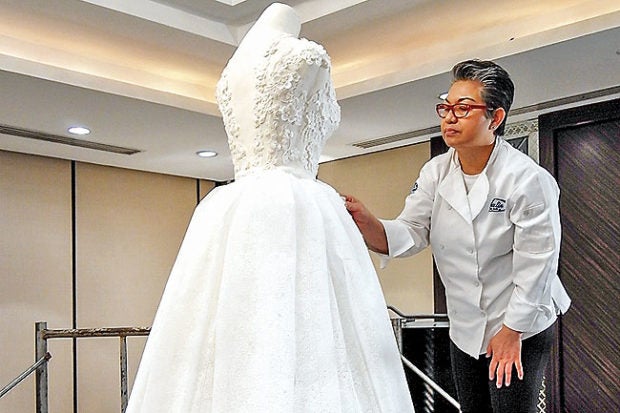 Her all edible bridal gown cake display, featured at the ‘Weddings at The Peninsula 2018’ event at the main lobby of The Peninsula Manila, “astounded both local and foreign hotel guests”.

For the occasion, Faridah created her biggest and tallest wedding gown cake to date, which was referred to during the event as “the World’s Biggest Wedding Gown Cake”.

The seven-foot tall bridal gown cake, weighing over half a tonne, comprised a 1.5 feet tall torso made of coco pops, chocolate ganache, fondants and was decorated and embellished by over 2,000 units of flower petals, beads and pearls – all made of sugar.

The cake’s 5.5 feet skirt was made of 252 layers of butter cake, 300 kilograms of chocolate ganache, 60 kilograms of fondant and 19,500 square inches of sugar lace on six panels of tulle.

All these formed the seven-foot tall and over 600-kilogram of all edible wedding gown cake.

This latest creation, dubbed ‘The Bride’, was the fourth of Faridah’s bridal gown cake series. Her last three creations were all showcased in Brunei.

A press statement noted that ‘The Bride’ was prominently displayed throughout the event at the centre of the main lobby of the hotel, adding that it became the main attraction that day, created frenzy among the visitors and trended on social media.

The annual event showcased some of Manila’s best and carefully handpicked wedding suppliers. This year, only 36 exhibitors were chosen to showcase their products and services.

Faridah’s company ‘Cakes by Faridah’ was invited to join so she could showcase her cake couture and edible art by creating what could be the biggest wedding gown cake ever seen in the Philippines, and possibly in the world.

Aside from this iconic creation, ‘Cakes by Faridah’ was also among the curated exhibitors during the event and the booth showcased her carousel cake creation, the statement added.

According to information on the ‘Cakes by Faridah’ website, in addition to cake decorating and being a restaurateur, Faridah, a mother of eight, is also a Wilton Method Instructor and an Accredited Tutor for Paul Bradford Sugarcraft School.