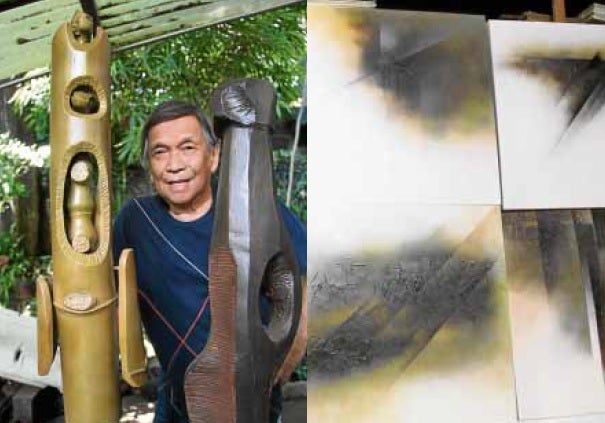 It was 1959. The Art Association of the Philippines (AAP) was holding its annual competition and a freshman at the University of the Philippines, Francisco M. Verano, studying Fine Arts, with dreams of glory resonating in his mind, decided to join the contest. He was into painting and sculpture but more of the latter, at the time.

So he came up with a small sculpture which he called “Stone Idol.” It had geometric lines, with small craters almost like those in the moon. A square block protruded from what should have been the eyes and the mouth was a half-filled cavity. The work was almost sinister; it had an air of mystery.

When he brought the piece to the AAP office, then in Isaac Peral (now United Nations  Avenue), Ermita, carrying it by himself, Verano noticed that there were many large-scale works being carried in by three or four men. One of these was by his professor, Napoleon Abueva! The young artist got cold feet and turned back, sure he had no chances of winning.

AAP president Purita Kalaw-Ledesma noticed him and called out, “young man where do you think you’re going and what is that you are carrying?” Sheepishly, he told her he had wanted to enter it in the contest. “Well, then bring it in,” she snapped. “And let it be judged.”

A few weeks later, at school there was excitement outside the office of the dean, Dominador Castañeda. The latter’s voice could be heard thundering, “hanapin si (look for) Verano.” He became fearful that he would be reprimanded for some misdeamenor, only to be told by the dean himself that his work “Stone Idol” had won first prize.

Soon, after graduation, he began to negotiate the turbulent waters between painting and sculpture. He experimented with broom sticks (“walis-tingting”) dipped into acrylic, and slashed across the canvas, creating a lyrical effect. His “Tondo Tidelands” won another prize at the AAP, Best Landscape Painting.

Verano also experimented on bamboo and sawdust, with the latter medium creating sculptures too heavy to carry. His “Bamboo,” wrote Kalaw-  Ledesma in her book “The Struggle for Philippine Art” (1974), “is one of the most successful experiments in this medium. Out of bamboo, normally a fragile medium, the artist managed to create a monumental effect.”

Through the years and decades, the artist turned out landscapes showing the changing seasons, paintings and sculptures, abstract and figurative.

Now, considering his age, he is ready for a retrospective, “Tangents and Turns,” paintings and sculptures from 1959 to the present, at the SSS Museum on East Avenue, Quezon City. Close to a hundred works have been assembled. –CONTRIBUTED