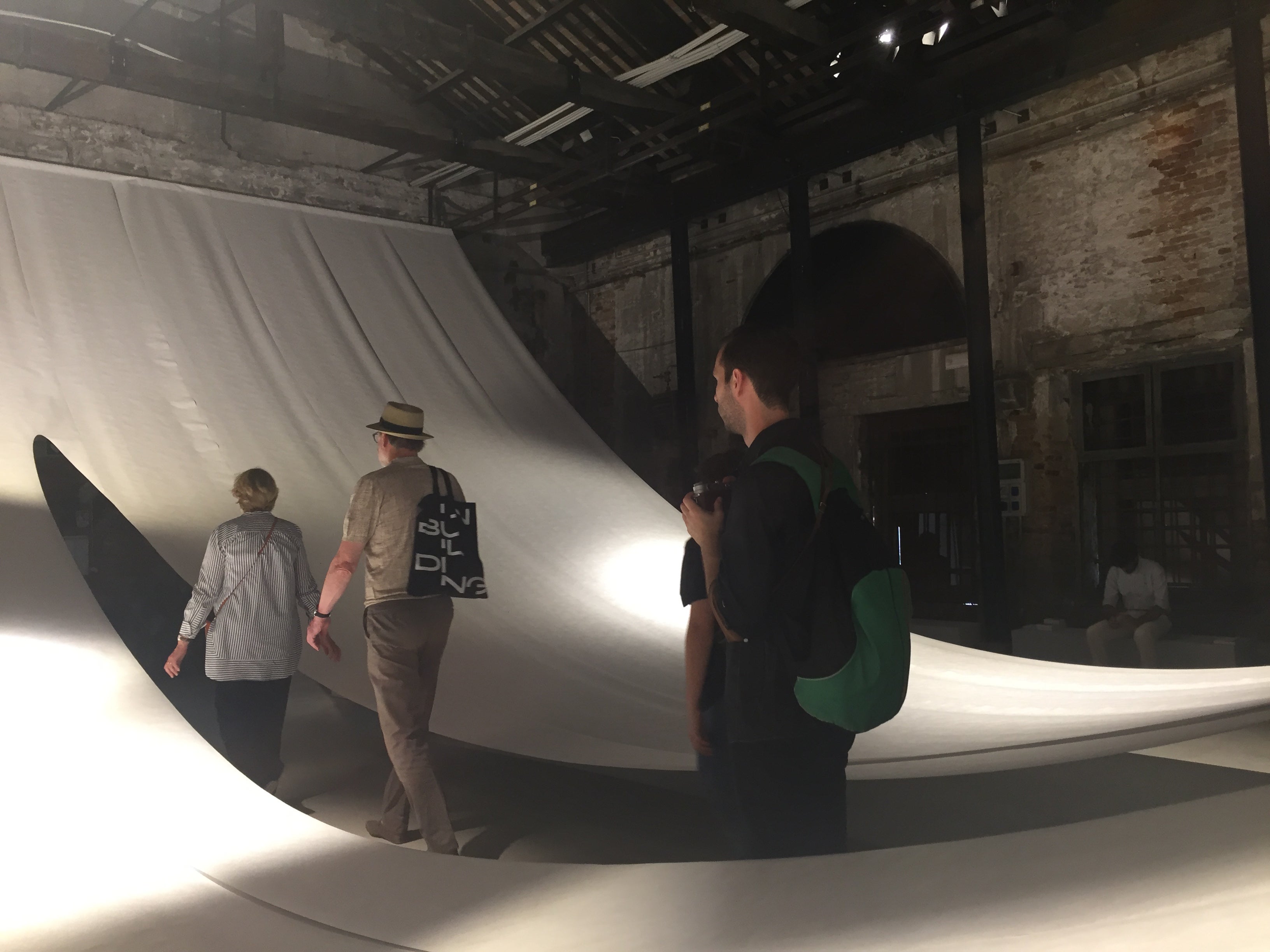 VENICE – We live in an increasingly complex world, yet we also tend to be increasingly unplugged from the actual experience of everyday life. Far from a foregone conclusion, architects from Indonesia, Taiwan, and the Philippines want global architecture to come down off its pedestal and transform people’s lives by providing additional space to local communities.

This vision of architecture truly resonates with the theme of the 16th International Exhibition la Biennale di Venezia, “Freespace,” given by curators Yvonne Farrell and Shelley McNamara. To the curators, “Freespace describes a generosity of spirit and a sense of humanity at the core of architecture’s agenda, focusing on the quality of space itself.”

Faced with this soaring lack of public space in contemporary architecture, Farrell and McNamara invited the curators of the National Pavilions and Collateral Event to translate “Freespace” in their participating projects and highlight how architecture can provide “free and additional spatial gifts to those who use it” and address the “unspoken wishes of strangers.”

Sunyata – The Poetics of Emptiness

In this regard, the Indonesia Pavilion invites viewers to consider an architecture “freed” from forms and shapes. To the curatorial team, emptiness, or “Sunyata” in Indonesian, is comprehended as an active entity; a singularity that functions as a prominent agency in life and at the same time, as a “void” which demands to be conquered.

Sunyata also hints at a particular design approach based on everyday architectural practices in Indonesia where collaboration between the craftsman and the architect is a common practice. Throughout the archipelago, building practice is a communal activity; it is a project for people and by people. The role of architect or designer in this endeavor is more as a “conceptor” rather than a project leader or creator who could solely claim the novelty of the design.

The Indonesia Pavilion is, therefore, a chance to revisit this deeply-rooted building practice and reformulate it into a design statement. To this end, Sunyata is departed from an awareness that a similar practice of celebrating ‘emptiness’ exists in various building practices throughout Indonesia. Emptiness is a concept that strongly rooted in various cultures and religions in Asia.

The interpretation varies. Nevertheless, the understanding is always in the same tone, according to the curating team which won a special mention for its sensitive installation that provides a framework to reflect on the material and form of traditional vernacular structures. Emptiness here is understood as an active entity; a singularity that functions as a prominent agency in life.

Still, the Indonesia Pavilion is aiming neither to document types of void nor to make a history of ‘void’ in Indonesian architecture. It also has no intention to summarize the richness of diversity of Indonesian architecture. The idea of Sunyata situates a conversation between human and space as the crux of architectural manifestation where the human becomes the main protagonist in the dialogue.

Departed from various references which we can find in various building practices from traditional to contemporary architecture in Indonesia, the pavilion attempts to set an inflection point on opening a discourse on design approach in Indonesian architecture, especially to respond towards grid-based design practice and an in-coming inevitable wave of parametricism as one of the results of the advancements in digital technology.

Living with Sky, Water and Mountain: Making Places in Yilan

The same is true with the work of Huang Sheng-Yuan and his team from Fieldoffice Architects who designed Taiwan’s Collateral Event at the 16th International Architecture Exhibition. The exhibit, curated by Professor Wang Chun-Hsiung, highlights the true sense of community resulting from the intimate connection between residents and their living environment in Yilan County, northeastern Taiwan.

The exhibition also echoes the singularity of Taiwan architecture on the international stage. Huang believes that architecture should reinforce our sense of the real and the poetics of reality, and consequently, give us an existential foothold in space, time and the continuum of culture.

Accordingly, architecture should not only expand the realm of the new, but also reinforce the presence of Taiwanese traditions and the timeless qualities of buildings at large. This fundamental starting point for thinking about architecture shows his concern with residents’ desires, starting from the planning to the completion of every project, explains Huang.

By promoting architecture freedom and renaissance through dialogue the Collateral Event is for sure fully in line with this year’s theme — ‘Freespace.’ A positive attitude that expands to the exhibition ground designed by Curator Wang Chun-Hsiung. “The challenge was to show Taiwan architecture in such a baroque space,” notes Wang. In order to show their respect for the local culture, Wang remarks that they used all elements in the room to enhance the viewing experience of international visitors.”

The City Who Had Two Navels

Curated by Edson Cabalfin at the Artiglierie of the Arsenale in Venice, the Philippine Pavilion features the works of contemporary artist Yason Banal who was commissioned to create a multi-channel video installation that weaved together fragments of historical, modern and contemporary Philippine architecture.

Cabalfin also asked four schools and one organization to participate as exhibitors. Together, they confront the tension between the vicissitudes of the past and the challenges of constructing contemporary subjectivity in a pavilion that highlights two “navels” that are in constant dialogue: the forces of colonialism and neoliberalism.

The pavilion explores this relationship between the past and the future by focusing on the built environment as an expression of self-determination and as setting for a global and transnational revolution. The Philippine contribution to the Biennale seeks to interrogate architecture and urbanism’s ability to empower and transform people’s lives.

To Cabalfin, the juncture of these two “navels” represents an “emergent wave of postcolonial anxieties born out of the process of exiting the colonial condition.” Through a transnational and transhistorical investigation, the curator argues that the Philippines does not exist in a vacuum, that it is implicated within power relations, and that it is inextricably intertwined with other nations and people.

To address this emerging postcolonial anxiety, the Philippine Pavilion invited future architects, planners, and designers to respond to the two “navels” and the concomitant architectural and urban issues to develop a “Freespace” or “Pookginhawa” that would create new possibilities for renewed life and hope.

The National Pavilions of the Philippines and Indonesia, as well as the Collateral Event of Taiwan open to the public from now until Nov. 25, 2018.