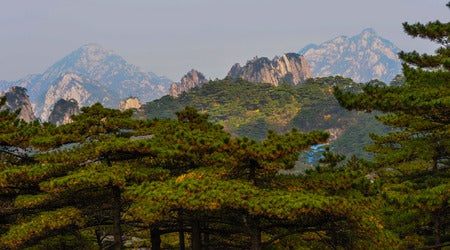 One man from China has caught the admiration of travelers as he carried his wife on his back while hiking the Huangshan mountain in Anhui province. The Huangshan mountain range is considered a Unesco World Heritage site and is known as one of China’s most famous mountains, having been celebrated in pop culture and literature for hundreds of years.

The 57-year-old Wang Xiaomin has been carrying his wife on his back for a while now, having first done so in their past trip in the Potala Palace in Lhasa, Tibet. According to Pear Video via South China Morning Post last July 24, Wang’s wife, whose name wasn’t given, was diagnosed with motor neurone disease five years ago, an affliction that degenerates one’s motor nerves and weakens the body’s muscles.

“The world is so big and I want to take her to see it so that she will not leave with any regrets,” Wang said in the report.

Wang and his wife do not have any children, thus making it easier for them to travel around together. Wang said, “I know there isn’t a big hope of her recovering from this kind of disease, so I brought her on a trip to see the world.”

For now, the couple’s next destination still remains unknown, but regardless, Wang vowed that near or far, he will continue on in carrying his wife on his back. Cody Cepeda/JB