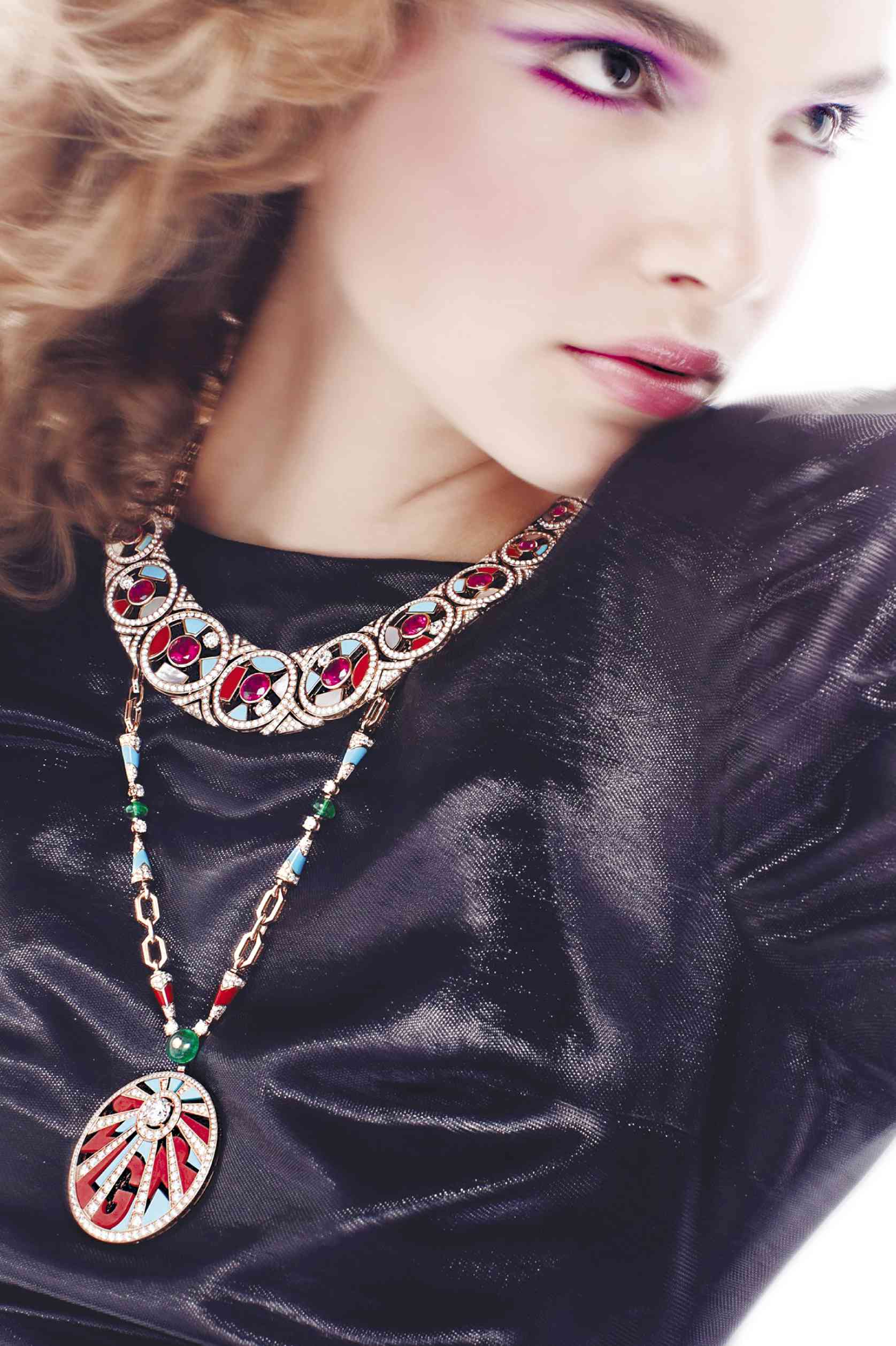 This was what Andy Warhol told Nicola Bulgari in the 1980s, as the King of Pop Art admired how the legendary Italian jeweler was able to capture the zeitgeist of that extravagant era.

At the time, the house of Bulgari was transforming ancient Roman coins into pendants, a move that Warhol felt was a genuine representation of that decade—to take something mundane and ordinary, and elevate it into art, much like his own.

In the ’80s, famous Bulgari clients included Grace Jones, who often wore her Tubogas watch to parties. Princess Grace of Monaco and then US first lady Nancy Reagan were also photographed in their Monete gold chain links.

Nicola Bulgari, a great-grandson of the Bulgari founder, was so enamored with the Big Apple that he moved to New York in the 1980s and struck up a friendship with Warhol.

The artist became a frequent visitor of the Bulgari boutique at the Pierre Hotel, and would use the jewels for his shoots for Interview, the magazine he cofounded.

In a nod to that period, Bulgari unveiled recently its 2018 high jewelry collection, “Wild Pop,” an exhibition of which was held last July 25 in Singapore—the collection’s first stop after its Rome debut in June.

In a villa at the Capella Resort in Sentosa Island—incidentally, the same venue of the historic Trump-Kim summit in June—over 100 pieces of “Wild Pop” high jewelry were put on show for the press and clients. They were set amid Warhol’s screen prints of Botticelli’s “Birth of Venus,” on loan from the Andy Warhol Foundation.

In the center was a replica of a Roman goddess statue, naked from the waist up—in vivid fuchsia. It held neon fluorescent lighting tubes on each hand, one heart-shaped, the other a lightning rod.

The statue was an embodiment of what Bulgari is all about—rooted in 2,700 years of Roman history but also with a touch of modernity, said Giampaolo della Croce, Bulgari’s senior director for high jewelry.

“That’s the concept (of the collection), a blend of modernity and innovation with antiquity,” he said. “It’s about our interpretation of Italian extravaganza”—in other words, la dolce vita—mixed with the “unexpected, a boldness, something exciting. It’s about breaking rules.”

Bulgari felt Warhol’s affinity with the brand would be a good starting point to hark back to ’80s excess, where everything was big and bold—from shoulder pads to hair. It’s not “normal pop,” Della Croce stressed, but “wild pop.”

Della Croce recalled how a common friend of Warhol and Nicola Bulgari attempted to broker a trade between the two men: Warhol’s artwork in exchange for Bulgari jewelry. Neither was sold on the idea—a fact that the Bulgari heir would later regret, as the Warhol brand’s value and renown rose.

Several pieces are a nod to David Bowie’s lightning rod makeup for the album cover of “Aladdin Sane” that, though released in 1973, gained even greater popularity in the next decade with the rise of MTV.

The MTV era is celebrated with spectacular conversation pieces in the shape of microphones, synthesizers and vinyl records—all rendered in Bulgari’s signature bold color combinations of precious gems.

Bulgari also looks back on the logomania of the ’80s. The house was a pioneer of the logo era with its Bulgari Bulgari watches that bore logos around the bezel.

This time, a necklace and a bracelet are rendered in pink gold with turquoise, diamonds and emeralds, the graphic Bulgari letters in coral rubrum.

The cat person in Warhol—he had 25 at one point—also gets a nod, with his favorite, Sam, replicated in a bracelet of chalcedony and diamonds.

Palm tree motifs as well as flamingos and art deco shapes are reminiscent of the seminal ’80s cop series “Miami Vice,” while the general audacity and daring is an homage to women of that decade who dared stand alongside the men, said Della Croce.

He refers to Alexis Carrington of the “Dynasty” series, who was played by Joan Collins in the original run.

Della Croce thinks a woman who embodies “a blend of the beauty of Farrah Fawcett, the attitude of Wonder Woman and the sex appeal of Joan Collins in ‘Dynasty’” would be most suited to wear the “Wild Pop” collection.

“A lady I met who’s kind of a blend of these is Uma Thurman,” he added. “She’s very energetic, super beautiful and she is her own manager.”

A younger persona that would be “super perfect,” too, is socialite, designer and fashion influencer Chiara Ferragni.

“She’s an angel and a devil,” he said with a laugh. “She can be an ambassador and an icon. It takes an extraordinary personality or the jewels will overwhelm.”

Della Croce said it took 18 months to put the collection together. One design that he almost vetoed was a suite called “Happy Leaves,” perhaps the first high jewelry rendering of recreational marijuana.

“The first time I saw the sketches, I said, maybe it’s a little bit much. In the end they convinced me… They told me there was a movement of artists that depicted art only under the influence and excitement of the drugs. Hallucinations are the basis of those colorful patterns, an experience for the artist to go beyond to be even more inspired. I understood the link.”

One of the “Happy Leaves” necklaces has been sold, and only one made it to the Singapore exhibit.

“There is a clientele for almost about anything,” Della Croce said. “The limit is the wearability. With the color combination, you can dare.”

Colorful gems and their unexpected uses have been a hallmark of Bulgari jewelry. It doesn’t just look at its own archives and remake what’s already been done.

“This is totally different from our own collection in the 1980s,” he said.

“We had long sautoir necklaces, long chains and pendants. In ’84 to ’85 we had chokers. There are chokers here but the designs are so different. The common thread is the concept. [Being] contemporary means changing every time. We aren’t those guys who look at their book and make a new replica. We looked at our archives, yes, but it was more to understand what we did at the time, not to copy or adjust.”

The most precious in the collection in terms of monetary value isn’t one of the glorious necklaces, but a single ring, a 23.38-carat cushion-cut Kashmir sapphire with two diamonds, set in platinum, priced at 9.5 million euros.

Apart from the rarity of the luscious royal blue gem, the cost is owed to how much wastage goes into the cutting, said Della Croce.

The greatest number of Bulgari collectors in the continent is in Japan—not simple buyers but real collectors who appreciate the history and techniques, he added.

In terms of monetary value, the jeweler’s biggest market is China.

Della Croce has been in the jewelry trade for three decades and he has seen just how much it has evolved.

“The most dramatic change and the most evident is the usage of jewelry, not very much the aesthetic but the usage,” he said.

“Thirty years ago, you couldn’t go to a black-tie function without a superb parure of diamonds. Now it’s much more like nice colorful earrings with a ring, or a glam jewelry watch and necklace. No more matchy-matchy. Today it’s showing off your good taste and personality. You don’t wear a set. Style comes in when you mix and match.”