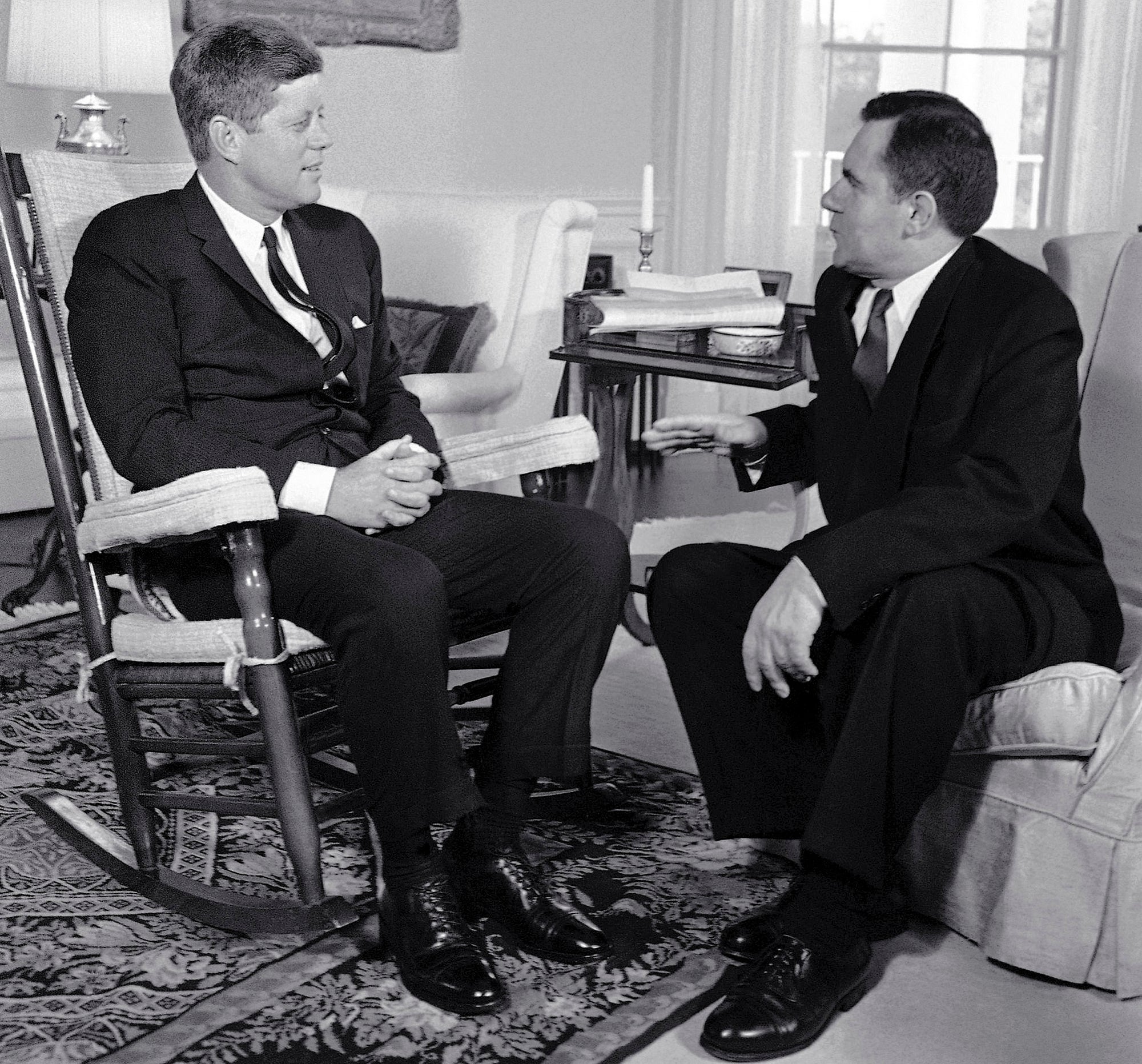 In this Oct. 6, 1961, file photo, President John F. Kennedy, left, sits in his rocker in the White House in Washington, as he talks with Soviet Foreign Minister Andrei Gromyko about the Berlin situation. Beginning Friday, Aug. 3, 2018, Eldred's auction gallery in East Dennis, Mass., on Cape Cod, is auctioning items associated with the late president, including a rocking chair that Kennedy used in the White House. Image: AP/Bob Schutz

JFK’s rocking chair, doodles, other iconic memorabilia up for grabs

BOSTON (AP) — Some of the most iconic items associated with the late President John F. Kennedy are going on the auction block.

Eldred’s auction gallery in East Dennis, on Cape Cod, is taking bids Friday on a rocking chair that JFK used in the Oval Office, a tie clip in the shape of the PT-109 torpedo boat Kennedy commanded during World War II, and pens he used to establish the Peace Corps and sign a landmark nuclear arms treaty.

Other items up for grabs include a charcoal drawing of JFK done as a study for the slain president’s official White House portrait; handwritten notes JFK jotted about Vietnam around 1953; and his letter opener and crystal ashtray.

There are also copies of Kennedy’s 1957 Pulitzer Prize-winning book, “Profiles in Courage”, being auctioned — at least one autographed by the POTUS.

It’s a chance for JFK admirers to own some “coveted” bits of history, auction house vice president Bill Bourne told The Associated Press.

“There’s only so much of this material out there,” he said. “And these are some truly iconic pieces.”

The upholstered oak rocking chair, worn yet still expected to fetch between $50,000 and $70,000, is particularly emblematic. JFK often was photographed sitting in it while meeting with world leaders. The former president’s doctors urged him to use rockers to ease his chronic back pain.

JFK’s fountain pens, which are being sold as a lot of 15 with bids expected to start around $60,000, also were used to designate the Cape Cod National Seashore — Kennedy’s old stomping grounds — in 1961. The Peace Corps was signed into existence the same year.

And one of the pens was used on the 1963 Nuclear Test Ban Treaty, an accord that helped steer the planet away from nuclear warfare a year after the Cuban Missile Crisis brought the U.S. and the Soviet Union to the brink.

Oddball auction items include JFK’s prized if somewhat garish silk scarf, decorated with bronze Democrat donkeys and blue stars; the creased and stained 1961 inaugural ball invitation that JFK sent to Frank Sinatra; and Kennedy’s personal stereo, including records by Jackie Gleason and other chart-topping artists of the day.

Among the more startling pieces of memorabilia: JFK’s last pencil doodles before his assassination on Nov. 22, 1963.

Kennedy was known to doodle during meetings, and the scribbles being auctioned are on Texas hotel stationery. JFK’s secretary inscribed one page with the date of Nov. 21, 1963 — the day before the nation’s 35th president was fatally shot as he rode through Dallas with his wife in a motorcade.

“It may have been one of the last things he put on paper,” Bourne said. “In fact, it probably was.” CC

The poetry, persuasion of JFK’s speeches