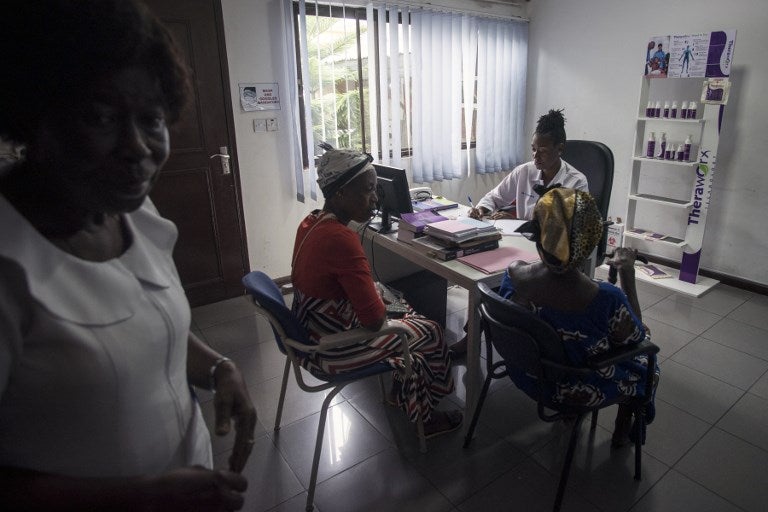 R. Osazuwa, dermatologist at Rabito Clinic in Accra takes care of a patient in her consulting room on July 3, 2018. Africa is experiencing a massive trend of skin bleaching, also called lightening or whitening, particularly in teenagers and young adults. The widening phenomenon is laden with health risks. Rabito Clinic is specialised on all kinds of skin diseases. Every day around 20 patients with skin disorders, because of the long-term use of skin-whitening products, are treated in the clinic. Women, men and even children use skin-lightening creams daily in Ghana, a common practice that has been in the country for long time. / AFP PHOTO / CRISTINA ALDEHUELA

Skin bleaching in Africa: A factfile

Skin bleaching, or lightening, has become popular in many African countries. Here’s a factfile:

Skin creams are by far the most popular form of bleaching.

They work by inhibiting production of melanin, the pigment produced by exposure from the sun.

Such creams may be safe in specific doses for a limited amount of time. But they may be dangerous when used for extended periods or in high concentrations, say experts.

“What you find is that people use the products for much longer than they’re supposed to and so they start getting those really harmful side effects,” said Dr. Rasheedah Adesokan, a Nigerian skincare expert.

Some companies in Africa have started labelling their products as organic in order to reassure users, said Dr. Isima Sobande, a Lagos dermatologist.

“Most of the time it’s a label to encase some unwholesome ingredients,” she said.

At first, people may be pleased as their skin starts to lighten from the cream, and “glow”.

But to maintain the lighter shade people have to stick to the bleaching regime, says Adesokan.

Over time the skin thins and becomes “mottled” and “patchy”.

“It’s been irritated, so there is redness and you can see green veins,” she says.

In the worst cases, people develop ochronosis — a build-up of acid that paradoxically makes the skin appear much darker.

These creams are widely available. In some locations, over-the-counter anti-bacterial, anti-fungal, steroid creams are used as whiteners.

The latest innovation is a compound called glutathione, taken in the form of injection or in pills, which are sold in markets or by retailers online.

Glutathione is a powerful antioxidant sometimes used in cancer therapy, said Lester Davids, physiology professor at the University of Pretoria in South Africa.

It has the side effect of making skin whiter, said Davids, adding that it is being marketed as a safer alternative to the creams.

In recent years, “injecting started to take over as a skin lightening submarket,” said Davids.

The problem with glutathione, as with skin bleaching creams, is regulation. But unlike with creams, there is a lack of studies on the impact of long-term use of the new product.

“Using glutathione is not illegal — just be very cautious,” said Davids, adding that the scale of the risk is not currently know.    /vvp