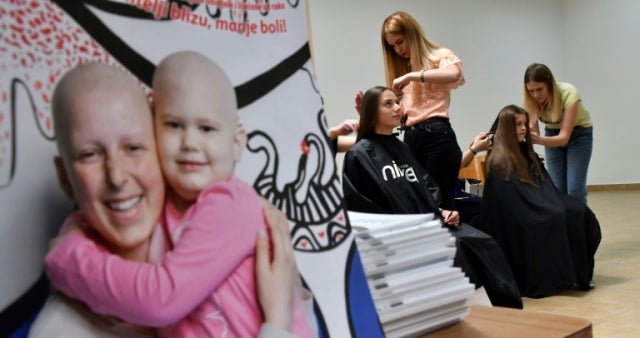 The "My Hair, Your Hair" campaign encourages Bosnians to donate their locks to a wigmaking workshop in Sarajevo, where volunteers weave wigs for children undergoing chemotherapy. Image: AFP/Elvis Barukcic

‘My Hair, Your Hair’: Bosnians weave wigs for kids with cancer

Ajla Nizic did not know what cancer was when she was diagnosed with it at age four.

“But I knew that I lost my hair,” said the Bosnian leukemia survivor who is now 19 years old.

Now a medical student, Nizic is leading a campaign to give other sick children a luxury her parents could not afford: wigs.

Bosnia, one of Europe’s poorest countries, has no domestic wig making industry.

The nearest available source has been neighboring Croatia, where wigs cost up to 2,000 euros ($2,300) — more than four times the average monthly salary in Bosnia.

“As trivial as it might seem at first while a person is battling such an aggressive disease, hair loss is often a huge psychological burden, particularly for girls who do not dare to go out without hair,” said Nizic, who now has long brown tresses.

Her campaign — “My Hair, Your Hair” — is encouraging Bosnians to donate their locks to a new wig making workshop that opened in Sarajevo in October.

There, volunteers are weaving wigs specifically for children who are undergoing chemotherapy or have lost their hair because of other health complications.

Hundreds of people — mainly women, as the hair must be at least 30 centimeters (12 inches) long — have flocked to hair-cutting events held at schools and shopping malls around the country. Others have cut their own hair and mailed it to the campaign.

On a recent afternoon at an elementary school in Sarajevo, several young pupils sat calmly as their hair was combed into sections and then snipped off.

“I don’t want to be the only one smiling,” said 13-year-old Suana Sehic, now sporting a bouncy bob. “I would like a smile to return to the face of all children.”

The Sarajevo workshop uses donated real hair to avoid the expense of the materials needed to make synthetic wigs.

It takes at least two weeks — and the hair of six people — to weave one wig, and a dozen volunteers have woven around 20 wigs since October, according to Nermina Cuzovic, 39, who set up the project with funding from the Swiss government.

In addition to making the wigs, the small studio is also training a dozen future weavers to carry on the exacting work, which involves using a small metal needle to sew strands of hair into a mesh cap that covers the head.

The pieces of donated hair must be as close in color as possible, said Fuad Halilovic, 22, who manages the workshop where the weavers work under bright lamps.

“We try to make it so the wig resembles the hairstyle the child had before losing their hair,” he told AFP.

“We measure their heads and look at photographs of how their hair looked before.”

A house for parents

The wig project is part of a wider effort by a Bosnian association called “A Heart for Children with Cancer” which helps young patients and their families.

In 2016, the group opened Bosnia’s first “Parents’ House” — a small apartment complex near Sarajevo’s paediatric hospital where families who live far from the capital can stay while their children are being treated.

“Before, some parents slept in their car near the hospital, because it is expensive to pay for accommodation in Sarajevo, particularly because the process of recovery is very long and exhausting,” said Fikret Kubat, the association’s president.

Atifa Buldic-Besic, 30, spent seven months in the home in 2016 when her daughter was being treated for leukemia. Now, her child is on the road to recovery and Buldic-Besic works in the Parents’ House as a volunteer.

The Parents’ House was built through donations and organizers are now seeking to find a sponsor for the upkeep of each of the 10 apartments.

Edin Dzeko, a Bosnian footballer who plays for Serie A Club Roma, recently signed up to fund one of the apartments for three years.

“All of us who have children know that they are the most precious to us,” he told a news conference at the Parents’ House.

“I want to show these children and their parents that they are not alone.” CC

Cancer survivor, 65, rises to the challenge