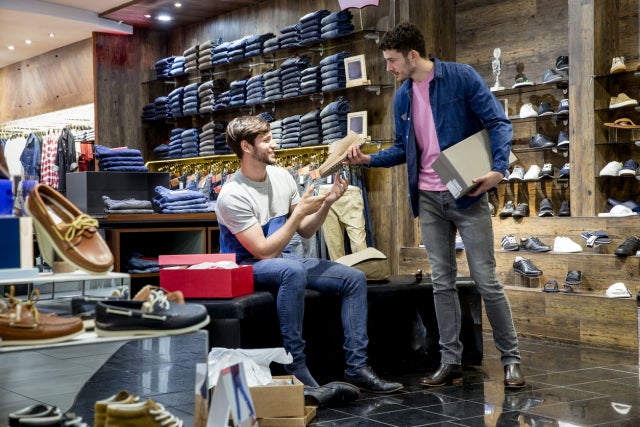 Britain's top footwear shoppers are men aged 16-24, an impressive 95 percent of them having bought a new pair of shoes last year. Image: SolStock via AFP

“Give a girl the right shoes and she can conquer the world,” Marilyn Monroe famously said. But — in the UK, at least — it seems that the boys also want a slice of the action.

According to the results of a new survey from market research giant Mintel, Britain’s top footwear shoppers are in fact men aged 16-24, an impressive 95 percent of them having bought a new pair of shoes last year.

Although women are generally more likely than men to purchase new shoes, (86 percent versus 78 percent), the survey found that in the 16-24 age category, just 5 percent of men had not bought new shoes in the past year, compared to 10 percent of women.

The trend is attributed to the rise in popularity of sneakers, athleisure wear and more casual shoes, with trainers the most popular footwear choice for both men and women. Last month, the sneaker was given the highest possible stamp of approval from the fashion industry, with the announcement that US Vogue editor-in-chief Anna Wintour had collaborated with Nike’s Air Jordan brand on a limited-edition capsule collection of footwear.

“With trainers such a popular category for men as a whole, young men in particular are likely to respond positively to advertising campaigns by the big sports brands that feature their favorite male sports personalities,” explained Mintel Retail Analyst Chana Baram.

The survey also found that fewer women are buying high heeled shoes, with just 22 percent admitting to purchasing a pair in 2018, down from 29 percent in 2017. Shoppers appear to be becoming more environmentally and socially conscious, too, with 22 percent saying they like the idea of vegan shoes, and 10 percent claiming to look for shoes made from eco-friendly materials. CC