To love another day | Inquirer Lifestyle 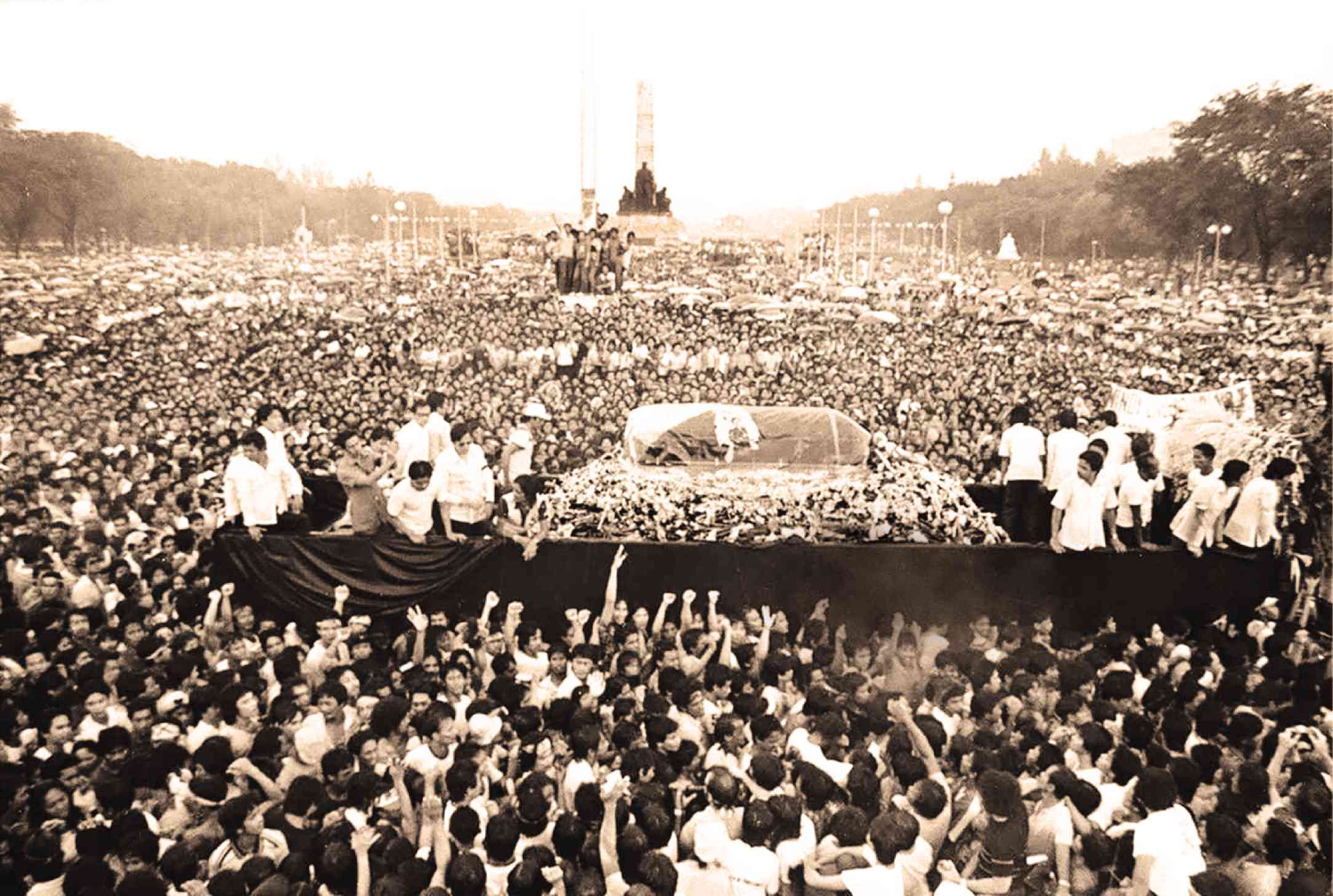 Today, Aug. 21,marks the 35th anniversary of the martyrdom of Ninoy Aquino, who was shot by escorts shortly after coming home from exile in the United States. Photographer Joe Arazas, then working for the state-run Philippine News Agency, provided the Inquirer this shot of Aquino’s funeral procession on Aug. 31, 1983, as it passed Rizal Park.

To love another day

“The night before he left, I really couldn’t sleep… It was Aug. 12, and August is a summer month, but in Boston sometimes it gets cool. Sabi ko, ‘Ninoy, I cannot sleep, I have chills. Ninoy, I’m really worried!’ Then he said, ‘Cory we’ve talked about this for a long time.’ And I said, ‘I know, it’s just that I wanted you to know how I feel.”

Who could blame her? They had just spent what she often described as their happiest three years as a family. It was happy because they lived very ordinary lives, away from the spotlight and the many years of political harassment and persecution.

This scene of an ever supportive wife giving way to a very passionate and driven husband was a common sight in the love story of Ninoy and Cory Aquino.

‘Ninoy and I were one’

In Uncle Ninoy’s letter to Auntie Cory, which he wrote from Taipei, he expressed what was probably left unsaid in their many conversations:

“All the things I want to tell you may be capsulized in one line–I love you! You’ve stood by me in my most trying moments and there were times I was very hard on you. But if anyone will ever understand me, it is you and I know you will always find it in your heart to forgive—and unfair and ironic as it is—it is because of this thought and belief that I often took you for granted…

“I realize I’ve been very stingy with my praise and appreciation for all your efforts. But though unsaid, you know that, as far as I’m concerned, you are the best. That’s why we’ve lasted this long. There will only be one thing in the world I will never accept—that you love me more than I love you—because my love, though unarticulated for you, will never be equaled.”

This love story, however, had a twist. I realized that at the center of their relationship and family life was a third party—a major factor in the big decisions they needed to embrace together with their children.

In many of their pronouncements and conversations, I noticed a pattern. He articulated what he discerned was his mission to be in solidarity with every suffering Filipino and she, with their children, embracing the mission with him.

Like any love story, it begins with one person choosing to love another person. They build a relationship where they get to know more about each other in good times and in bad.

Often, husbands like me would remark that the key to “a happy life is a happy wife.”

But seriously, a relationship, to be meaningful, will require each party to be unconditionally seeking the satisfaction and happiness of the other.

We know by now that the love story of Uncle Ninoy and Auntie Cory was very much like this. But what we, as a people, could be forgetting is this was the same kind of love that they shared with us. Their love of our country, in the end, was never about what was in it for them.

In a speech he delivered in Los Angeles while in exile in the United States, Uncle Ninoy described his personal struggle, which Auntie Cory needed to embrace with him:

“If the Filipino people have lost their voice and wouldn’t say no to the tyrant, what can one man do? I have no army, I have no following, I have no money, I only have my indomitable spirit.”

In another interview, Auntie Cory shared other conversations with Uncle Ninoy on the question of whether he would go home or not. The conversation went this way:

Cory: “Ninoy, can you tell me what possible scenarios there will be?”

Ninoy: “Siguro (maybe) when I get there, they will arrest me and bring me to Fort Bonifacio again; or because I have had a triple bypass, baka naman dalhin ako sa (they might take me to the) Heart Center; or then again they might put me under house arrest. But if they make a mistake and they have me killed, then that’s the best thing that would happen to me.”

Ninoy: “No, no … I’ve always wanted to die for my country.

Taipei was the last leg of Uncle Ninoy’s journey from Boston to Manila. If Auntie Cory just thought about what would be best for her and her family, she could have just insisted and told Uncle Ninoy to abort the homecoming. But she and Uncle Ninoy again were one and were very firm in their resolve on where he must be at that time of our people’s struggle.

I wonder what their final spoken words of goodbye were over the phone before he left his hotel in Taipei. They probably did not want to bring the phone down so they could still catch up and tell each other the many things that have been left unsaid.

Then again, there was probably really not enough time to do that since it was an expensive overseas call. To the young ones reading this, there was no Skype, Viber, WhatsApp or Telegram video call then.

Coming home as the widow was probably the most difficult part in Auntie Cory’s life in those very uncertain times. The memory of the night she had chills was probably flashing back and she was was probably asking herself whether or not the Filipino people realized the sacrifice his husband offered for them.

Would the Filipinos finally find the courage to stand up against the tyrant as the consequence of her husband’s death? She had all the reasons to doubt, as they had been out of the country for three years, and the people knew very little news about Ninoy. Facebook, Instagram or Twitter was not even an idea then. There was really no assurance that his decision to go home even mattered to the Filipino people.

When she arrived at the family residence on Times Street, Quezon City, after a long journey from Boston, many of her questions were answered. In her speech at the funeral Mass, she recounted:

“We arrived in Manila on Wednesday, Aug. 24. I could not believe my eyes when I saw a huge crowd in our home on Times Street, waiting patiently in line to view Ninoy’s body. I was overwhelmed by this extraordinary display of love and devotion.

“I had asked that my children and I be given a few minutes to be alone with our beloved Ninoy. We wanted to have him to ourselves for a few private and cherished moments. From that first night of our return to Manila, my children and I continue to witness an even greater display of love, respect and admiration for Ninoy.

‘We are not alone’

“Our friends have been very kind and generous to us; but even more comforting is the sight and presence of countless men and women who did not even know Ninoy, but are now helping to make our lives a little less difficult by demonstrating to us that we are not alone.

“The huge throng that met us the other day when we journeyed from Tarlac to Manila must have numbered in the millions. They had waited for hours and hours under the hot sun and no doubt had gone hungry and thirsty, but had patiently waited if only to catch a glimpse of my husband’s hearse.

“If my children and I appear to be brave during this, the most difficult period yet of our lives, it is because we know that this is what Ninoy would have expected of us. It is also because of our faith in God, and the belief that he is now helping us in this, our greatest need.

“And so today, I wish to thank all the Filipino men and women, young and old, who have demonstrated to me, to my children, to Ninoy’s mother and to his family, that Ninoy did not die in vain.

“Ninoy, who loved you, the Filipino people, is now loved in turn.”

This outpouring of love from a grateful people must have truly consoled her and moved her to love another day. And love us, she did.

These days, we ponder why the dark memories of our past have come back to haunt us again. It is disturbing to see how we as a people have become very divided. There is so much hate and distrust that it is becoming difficult to find hope that our country will ever become the safe and prosperous place that we all aspire for ourselves and the future generations.

As we remember Uncle Ninoy today, maybe it would be a good time to remind ourselves how much the man loved us, especially when death stared him in the face.

We also look back and remember how his love for his wife moved her to continue his unfinished mission to struggle with her people.

As we recall all these, maybe the question is: Can we be moved again to love another day? —CONTRIBUTED