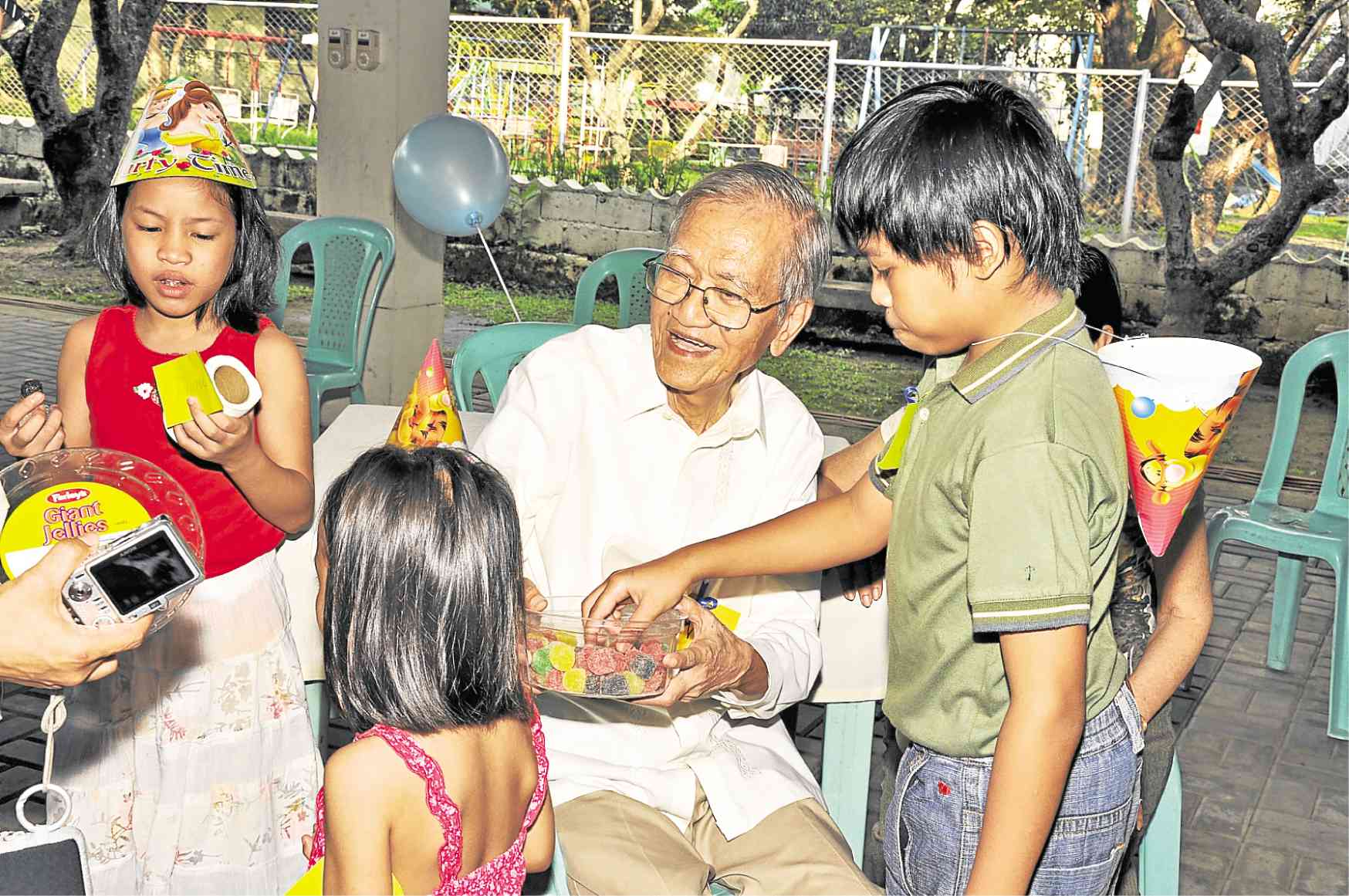 Dee, shown here distributing sweets to children, helped establish the Assisi Foundation for stewardship work. “Whatever we own or manage doesn’t belong to us, but should be used for people in need.”

Why Howard Dee’s work is unending

In 1946, when he was 16, Howard Q. Dee outlined the plan for the rest of his life in a high school composition for his graduating class at San Beda.

“I had relatives who died in their 40s and 50s, so in my life plan I gave myself 60 years,” recalls Dee, who was the Philippine ambassador to the Vatican and Malta during the term of President Corazon Aquino.

The first 20 years of his life would be devoted to study, he wrote, and the next 20 years to a profession he had yet to choose.

But at age 40, he projected, he would retire from his job and devote the rest of his life to helping the poor.

“At the age of 16, your mind is still groping,” he says. “I was not yet sure what I wanted to be. I don’t know why—it could be the influence of religion—but this idea of serving the poor was with me since my high school days.”

Dee’s projection turned out to be fairly accurate, except that the final third of his life has been extended indefinitely.

Since his retirement as president of United Laboratories, Inc. (Unilab) in 1975, the quiet, self-effacing Dee has devoted much of his energies to social development, driven in large part by an abiding faith in the social teachings of the Catholic Church.

“It’s a simple philosophy,” says the man who once referred to himself as a social worker. “As Christians, what are we to do? Follow the Lord. The thing is service, loving service, because God is love.”

Later this month, Dee will receive the Ramon Magsaysay Award in recognition of his “quietly heroic half-century of service to the Filipino people, his abiding dedication to the pursuit of social justice and peace in achieving dignity and progress for the poor.”

The award, to be likewise given to five other outstanding individuals from India, Vietnam, Cambodia and East Timor, recognizes Dee’s social development work with the Philippine Business for Social Progress (PBSP), which he helped form in 1970, and the Assisi Development Foundation which he founded in 1975 and still leads.

Born in 1930, Dee grew up in Tondo in his father’s lumberyard.

He attended San Beda High School, where Ramon Mitra was in his graduating class, and Benigno Aquino Jr. was a year behind.

In the 1960s, Dee would get together with like-minded young business executives to discuss the state of Philippine society, under the mentorship of Fr. Francisco Araneta, SJ.

“He was an economist and a nationalist, and I guess it was his influence that led me to this path,” recalls Dee of “Fr. Fritz.”

“We gathered every Saturday to discuss what was happening in the world. For a long time we had no name, then we called ourselves the Association for Social Action. The idea came up of establishing a common foundation to help the less fortunate.”

With help from Washington SyCip, Dee wrote a concept paper, which he presented to Don Eugenio Lopez Sr. of Meralco and Andres and Jose Soriano of the San Miguel Corp. and Atlas Mining.

With Sixto Roxas of the Bancom Group, the group incorporated the Philippine Business for Social Progress (PBSP) in 1970.

“It was patterned after the Venezuelan Dividendo Voluntario para la Comunidad, where the business community got together and agreed to allocate a certain percentage of their profits to social development projects,” recounts Dee.

It was the beginning of the idea that, many years later, would come to be called corporate social responsibility (CSR).

When PBSP took off, Dee and Father Araneta decided to start a smaller foundation they could run themselves. Upon his retirement from Unilab in 1975, they launched the Assisi Development Foundation.

“The concept behind Father Araneta’s teaching was that we are all stewards for the good Lord,” he explains. “Whatever we own or manage doesn’t belong to us, but should be used for people in need.”

“Assisi was named after St. Francis of Assisi, who dedicated his life to the poor,” he continues.

It was in keeping with Pope Paul VI’s 1967 encyclical “Populorum Progressio,” in which the Catholic Church squarely addressed the problem of world poverty and economic disparity.

The Assisi Development Foundation, of which Dee is the chairman, runs programs on education, livelihood, agriculture, health and other areas. To date, it has undertaken over 4,000 projects and assisted 10.5 million Filipinos.

In 1986, after the Edsa revolt, President Corazon Aquino appointed Dee as the country’s ambassador to the Vatican, a singular honor for the devout Catholic. “At that time, the Holy Father was Pope John Paul, now known as John Paul the Great because of his teachings on social responsibility,” he says.

“When I presented my credentials, the Pope told me: ‘You’re starting a new nation, taking over from a dictatorship. Beware two evils: communism and capitalism.’ Communism I could understand, but capitalism? I belonged to that world, I was a businessman. I looked at him askance. He just said: ‘Capitalism—materialism, consumerism, secularism.’ That was 32 years ago, but isn’t that a prophecy of what’s happening to the world and even our country today? Aren’t we a materialist, consumerist, secularist society today?”

Dee was also the natural choice to initiate peace talks with the various dissident groups in the country post-Edsa.

Dee proposed a national peace conference, involving all sectors of society, including Muslim separatists and communists.

In 1992, during the term of President Ramos, Dee was once more drafted to join the National Unification Commission (the predecessor of the present Office of the Presidential Adviser on the Peace Process) under Haydee Yorac.

“We went to every region to find out from the people why they were fighting the government,” he recounts. “I thought in my mind the reason would be poverty, the lack of opportunities. But the answer everywhere was the same: injustice. They were fighting because they were in an unjust society: economic injustice, social injustice, cultural injustice—even in the courts of justice, there was no justice. So peace is strongly linked with justice, and to the credit of President Corazon Aquino, when she declared the Decade for Peace, she said, ‘We are searching for a true and lasting peace based on development with justice.’”

The decade has passed and peace remains as elusive as ever.

“We’re still at square one,” he notes. “Peace with justice. That’s why the peace talks cannot accomplish much.”

Just as elusive is the goal of ending poverty.

As Jesus noted, the poor will always be among us, and Howard Dee’s work continues.