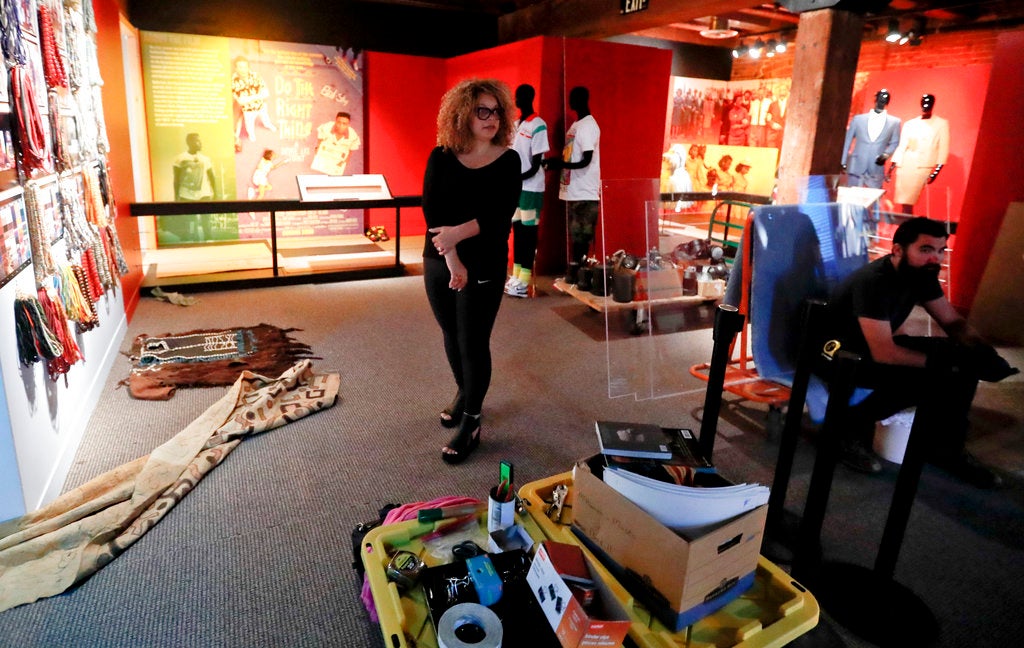 In this photo made on Thursday, Aug. 23, 2018, Ruth E. Carter walks through the hall where installers work on preparing the costumes for "Heroes & Sheroes", an exhibit of her cinematic costumes at Pittsburgh's Senator John Heinz History Center in Pittsburgh. The exhibit that opens Saturday, Aug. 25, explores Carter's groundbreaking career. "Heroes & Sheroes: The Art and Influence of Ruth E. Carter in Black Cinema" showcases over 40 costumes from nine movies. The costumes include those from "Amistad," "What's Love Got to do With It," "The Butler," "Malcolm X," "Selma," "Do the Right Thing" and of course "Black Panther." It is scheduled to run to Dec. 2, 2018. (AP Photo/Keith Srakocic)

PITTSBURGH (AP) — For more than 30 years, costume designer Ruth E. Carter’s creations have brought the African-American experience to life on the big screen, from 19th century slave ships in “Amistad” to 1980s Brooklyn in “Do the Right Thing,” to the Afrofuturistic land of Wakanda in “Black Panther.” Now, she’s bringing the spectrum of her work to Pittsburgh for a new exhibit called “Heroes & Sheroes: The Art & Influence of Ruth E. Carter in Black Cinema.”

The show opens Saturday at the Senator John Heinz History Center, showcasing more than 40 costumes from nine movies, and runs through Dec. 2.

“I’d been thinking about doing a retrospective for some time, and I really do love Pittsburgh, so it seemed like a comfortable place to test the waters for the exhibit,” Carter said in a recent phone interview.

Carter has worked on more than 50 films since she made the switch from designing for theater companies and dance troupes in the early 1980s, when Spike Lee hired her as a costume designer on “School Daze.” They’ve since collaborated on more than a dozen movies.

She’s also earned two Academy Award nominations for best costume design, first for Lee’s “Malcolm X” in 1993 — which made her the first African-American nominated in that category — and for Steven Spielberg’s historical slave ship drama “Amistad” in 1998. She also was nominated for an Emmy for the 2016 reboot of “Roots.”

The exhibit will celebrate her extensive career, and showcase sketches and movie clips alongside the costumes from films including “Amistad,” ”Sparkle,” ”What’s Love Got to do With It,” ”The Butler,” ”Malcolm X,” ”Selma,” ”Do the Right Thing” and of course “Black Panther.”

“I think that costume design is somewhat of a mystery to people, and this is an opportunity to learn about the costume designer as an artist and a storyteller,” Carter said. “In the 35 years that I have been doing costumes, I’ve found there is a narrative and a voice to my creative process and the films that I have done, which have lined up to tell the story of African-Americans in this country.”

Carter was approached about bringing a retrospective to Pittsburgh by Demeatria Boccella, whose organization FashionAFRICANA focuses on art and fashion in the African diaspora for shows around the city. She learned about Carter from their mutual friend, the late actor Bill Nunn, who broke through in Spike Lee movies in the late 1980s.

“I was just so impressed with her; she’s done so much work in the industry, and the depth of that work is really amazing,” Boccella said.

Nunn, who died of cancer in 2016, was a longtime Pittsburgh resident who appeared in “Do the Right Thing” as Radio Raheem, who dies when choked by police during a street brawl in Brooklyn.

Carter said that among her favorite pieces in the retrospective is Radio Raheem’s hand-painted “Bed-Stuy Do or Die” T-shirt.

For Boccella, bringing Carter’s work to Pittsburgh was twofold: to honor the designer and to inspire young visitors.

Boccella said she knew she wanted to get into the fashion industry ever since she was a child, but couldn’t find fellow African-American role models in her community.

“I wanted to see people who looked like me, doing work I aspired to do and it was very hard,” she said. “It is my passion and part of my journey to create and present those opportunities for the next generation.”

Carter says she hopes visitors take away from the exhibit something they didn’t know before, and perhaps find inspiration from her own personal backstory.

“It’s the story of a girl who had a dream and she pursued her dream and went all the way, and look what she was able to create from a single-parent household,” she said. “If I can do it, they can do it. You can live out your dream.” NVG