'She-canics': In one Philly garage, women using their own elbow grease | Inquirer Lifestyle 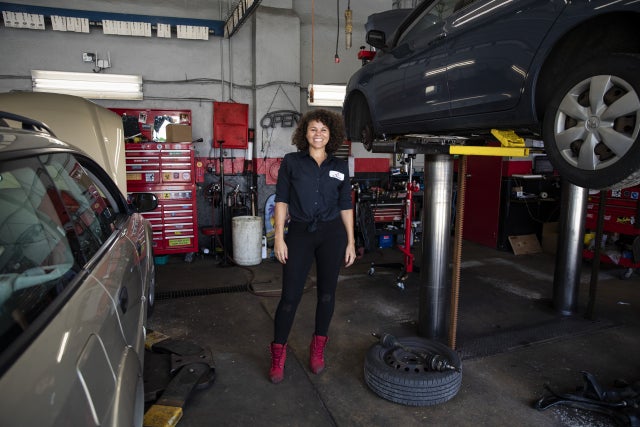 Patrice Banks, founder and owner of the Girls Auto Clinic, poses for a portrait at her garage in Upper Darby, Pennsylvania on August 7, 2018. Image: DOMINICK REUTER / AFP

‘She-canics’: In one Philly garage, women using their own elbow grease

On the outside, the auto body shop looks like the three other garages in this unassuming suburb of Philadelphia. Inside, classic rock is blaring from a radio and the sweltering August heat is unforgiving.

But it’s quickly apparent that this is no ordinary garage.

Shop forewoman Sue Sweeney — clad in black shorts, a black tank top and a bandana — is inspecting a car on a lift above her, while another woman passes her tools from a tray of equipment resting on a work bench.

There are hardly any men to be seen.

Welcome to Girls Auto Clinic, where a fleet of women mechanics is breaking the mold in the male-dominated industry.

“I used to be a woman in the automotive industry that hated all my experiences,” founder and CEO Patrice Banks told AFP.

“I called myself an auto airhead. I always felt like I needed a guy to go to the mechanic with me or that I was being taken advantage of.”

Banks was 31 and working as a manager at an engineering lab in 2012 when she decided to switch gears, head back to school and become a mechanic herself.

What began as monthly car workshops for women turned into a successful business.

“I wanted to create a business where they feel welcomed and they feel empowered,” the bubbly Banks said with a smile.

“If we are the number one customer, so many of us shouldn’t be feeling mistreated or misunderstood.”

In the United States, women make up about half of all drivers, according to the Department of Transportation, but they only account for about three percent of all automotive technicians and mechanics.

At Girls Auto Clinic, nine of the 10 employees are female.

“I can come in, be me, I can dress however I want and I’m not going to get judged whether I look girly enough or too boyish because of the type of work I’m going to do,” said Sweeney, 42.

During her 23 years in the business, Sweeney has heard every cliche in the book. One former colleague told her she “should be barefoot and pregnant in the kitchen.”

But she says blatant sexism based on the physical nature of the work never deterred her.

As Sweeney hoists an engine into a car, Banks says: “She’s incredible. And I’m like, who passed up on her?”

Banks, who sports a pair of red-heeled work boots, changes a tire with ease, narrating her actions step by step, as she does in her recent book, “Girls Auto Clinic Glove Box Guide.”

“It’s relatable — women get it,” she says. “It’s not boring car stuff like ‘Let’s talk about carburetors or horsepower.'”

Girls Auto Clinic has been open for just over a year but has already built a loyal customer base. Banks estimates that 75 percent of her customers are women, many of whom drive a few extra miles for the unique repair experience.

“The skilled and construction trades have tried for decades to incorporate more women with limited success, but having a female-owned and -operated business with trained professionals sounds like a good idea,” said Arthur Wheaton, professor of industrial and labor relations at Cornell University.

“There is certainly room for growth in the auto repair sector as fewer people go into the skilled trades.”

Banks is hoping to capitalize on her success and turn the shop into a nationwide franchise. A recently launched crowdfunding campaign aims to help open two new locations in 2019 and three more by 2020.

“We’re riding that wave, people are looking for things like this. This is the right time.” NVG