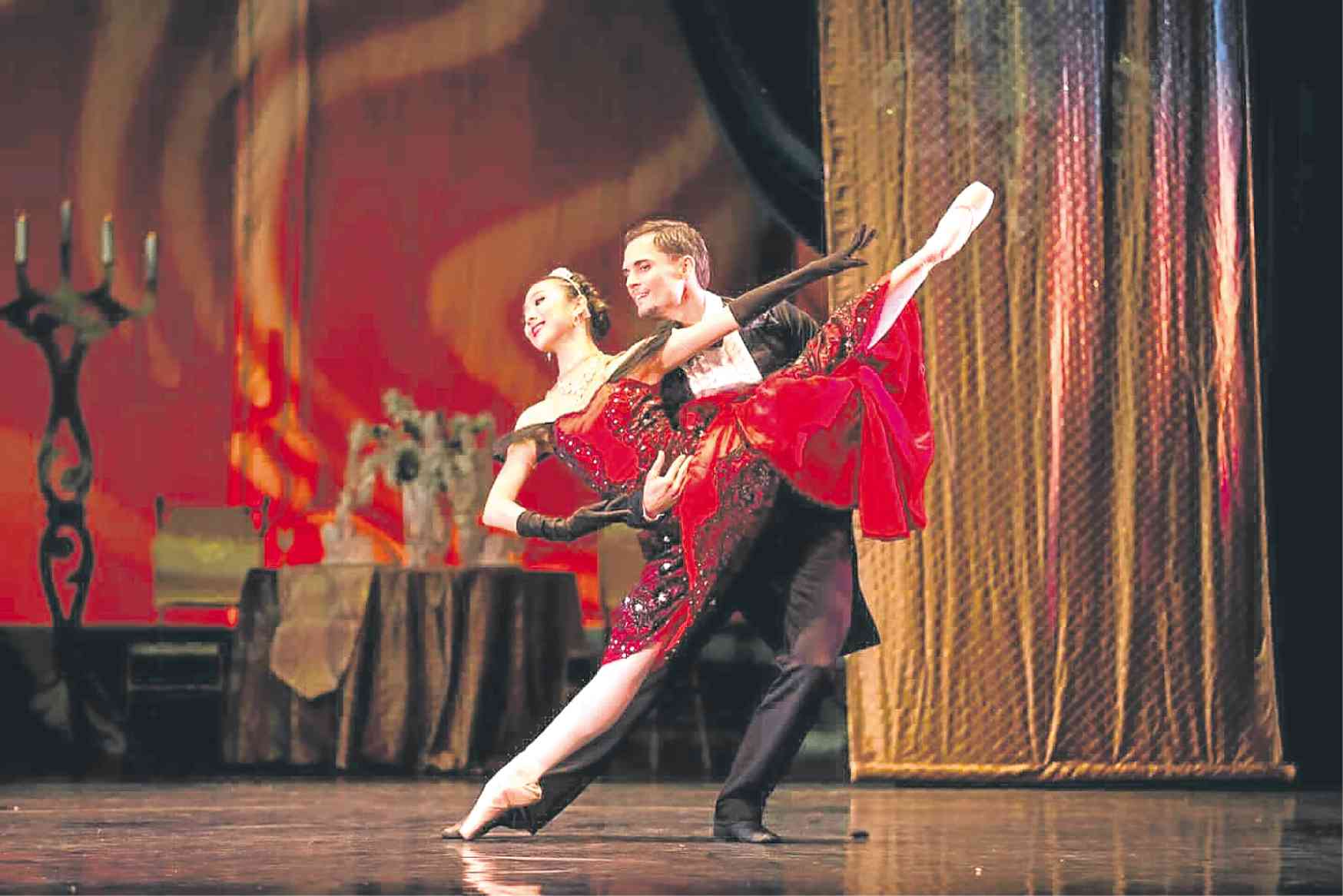 Philippine Ballet Theater (PBT) transformed “The Merry Widow” into a rom-com (romantic-comedy) and the gala audience at Cultural Center of the Philippines was all praises. Artistic director Ronilo Jaynario’s choreography was fully in the service of the story based on the opera and Franz Lehar’s score.

Although originally set in Paris, PBT’s “Merry Widow” is about a fictional country, Pontevedro, on the verge of economic collapse. A wealthy widow, Hanna Glawari (Veronica Atienza) is husband-hunting and wants to marry a foreigner. But to keep the wealth in the country, she has to marry a compatriot. Baron Zeta (Anatoli Panasiukov) sets her up with Count Danilo (Martin Buczko), with whom she had a romantic past.

Jaynario’s choreography captured the complicated dynamics of relationships, leading to the tender waltz between Hanna and Danilo. The balance of humor and emotion kept the audience in rapt attention.

Long-limbed Atienza was physically well-matched by the six-foot guest artist Buczko. Aside from her elegantly executed movements, she delivered expressive acting—thanks to a partner with gravitas.

Flawless in technique, Atienza performed the demands of her role with commanding assurance. Still a baby at 20 though, she must go deeper into understanding her character’s motivations through more effective coaching.

Buczko’s mastery of technique and seamless partnering were honed by his Russian Vaganova schooling and his exposure to various dance styles. His dancing was so effortless that instead of seeing steps, you saw a charismatic persona. Through detailed characterization, the Hungarian dancer showed different facets of Danilo—from a drunkard to the urbane aristocrat, jilted consort, and forgiving human being. And he didn’t go over the top.

Magbitang as Valencienne danced with vigor but also investing much into her character. San Juan as Camille exuded spirited presence and devoted partnering. With guidance, both could develop their presence on stage and work on their comic timing as a duet.

Although the cast was well-rehearsed and comfortable with the steps on this rerun, PBT could still take the dancing to a higher notch. The male corps could soar and turn, but it needed to work on precise footwork and partnering. The female ensemble was a mix of strong girls with exquisite body lines and greenhorns who needed to understand characterization, such as the mannerisms of Parisian elite in the party scenes. In the maxim scene, there should be more to can-can dancing than fluttering skirts. The character dances in the second act needed more exuberance and expressive upper body movements to keep the high energy of the ballet.

Nonetheless, PBT is back in the spotlight. It has been revitalized by ballet master Panasiukov, fondly called Papa, and Jaynario. Through their guidance, PBT dancers performed with commitment and charm, winning the audience’s hearts. —CONTRIBUTED