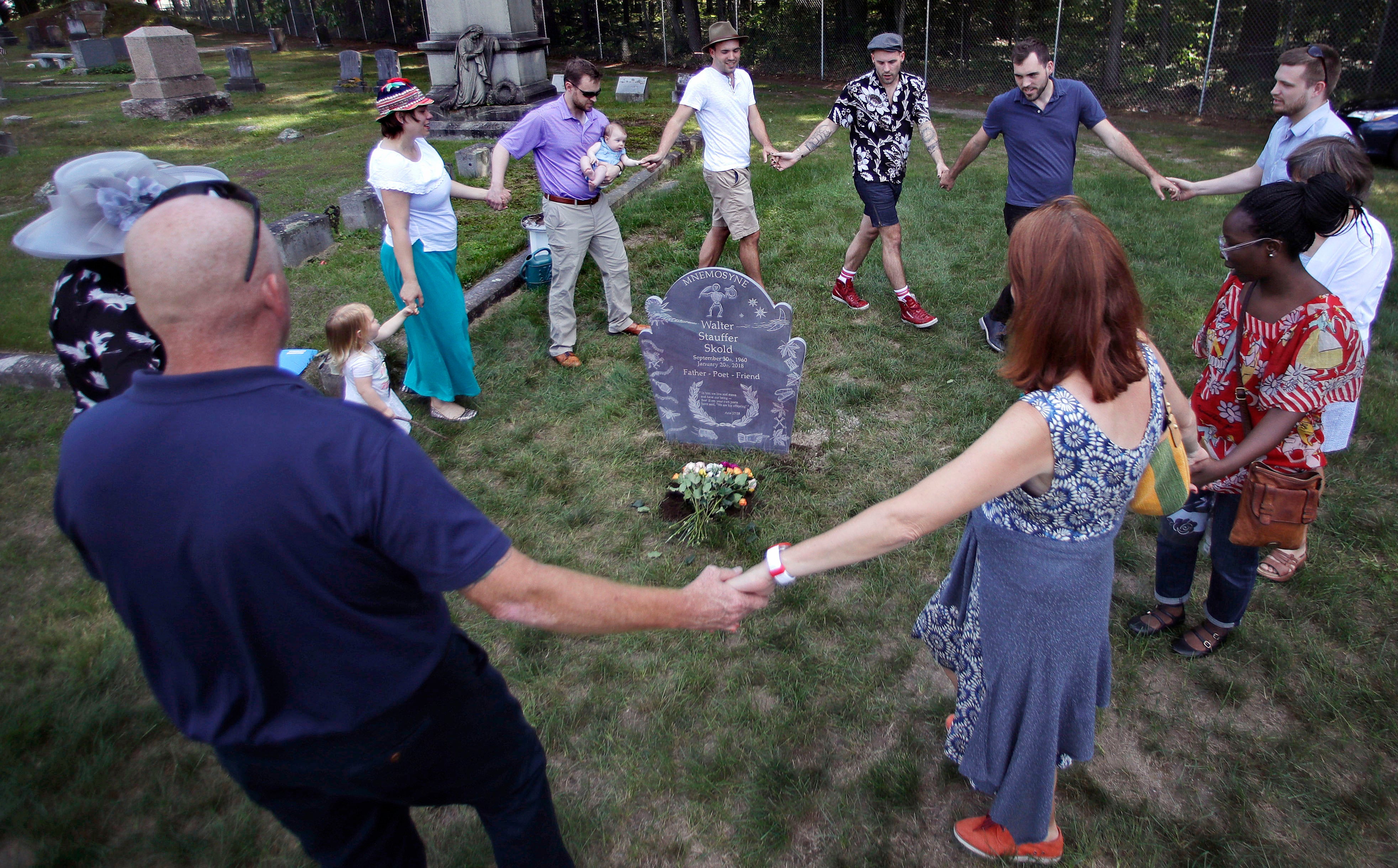 The family of Walter Skold, founder of the Dead Poets Society of America, dance and sing around his grave at the Pine Grove Cemetery in Brunswick, Maine, Monday, Aug. 27, 2018. Skold died of a heart attack at the age of 57 in January 2018, little more than a month after enlisting the son of novelist John Updike to carve a unique grave marker. (AP Photo/Charles Krupa)

Poet laid to rest under unique tombstone he commissioned

BRUNSWICK, Maine — The founder of the Dead Poets Society of America got what he wanted Monday: His remains were laid to rest under a special tombstone he commissioned before suffering a fatal heart attack.

The family of Walter Skold read poetry, including some of his own works, during the ceremony in a historic cemetery in Brunswick. His remains were buried under a slate tombstone carved with a dancing skeleton at the top.

“The end does not discriminate, It gives; it takes; it heals and breaks,” Skold wrote in a poem from the 1990s read by one of his sons, Charles. “It beckons for all to enter the grave: The final bed of roses from which the flesh cannot evade.”

Afterward, family including five children and two grandchildren gathered in a circle, danced and sang hymns. One of his poems read aloud was named, “Grave Dance.”

Known as the “dead poet guy,” Skold combined humor, history and the macabre in his travels to the final resting places of more than 600 poets. He launched the Dead Poets Society in 2008 in Maine, drawing inspiration for the name from the 1989 Robin Williams movie.

His ultimate goal, he said, was to draw attention to poetry and poets, especially those bards who were in danger of being forgotten by history.

He traveled in a colorful cargo van dubbed “Dedgar the Poemobile” with a stuffed panther named “Raven” and an Edgar Allan Poe bobblehead on the dashboard. He held graveyard poetry readings and sometimes toasted poets with a drink. More than once, he had to explain himself to police.

That uniqueness came through in his tombstone, which he commissioned little more than a month before he was felled at age 57 in January by a heart attack.

Michael Updike, son of novelist John Updike, was enlisted to carve the tombstone featuring a scattershot of literary inspiration from Skold’s life and from graves he’d visited.

There was some gallows humor, of course. Carved on the bottom, hidden from view under the dirt, were these words: “This here rock’s a talking stone just like Walt, who’s turned to bone.”

The tombstone was supposed to be at a family plot in York, Pennsylvania. But it was rejected because it didn’t meet the cemetery’s requirements.

So the family decided to bury part of Skold’s ashes in Maine, where he lived when he created the Dead Poets Society of America and began documenting graves.