From ‘bacalao’ to ‘bagoong’: A successful Filipino foodfest in Lisbon | Lifestyle.INQ ❮ ❯ 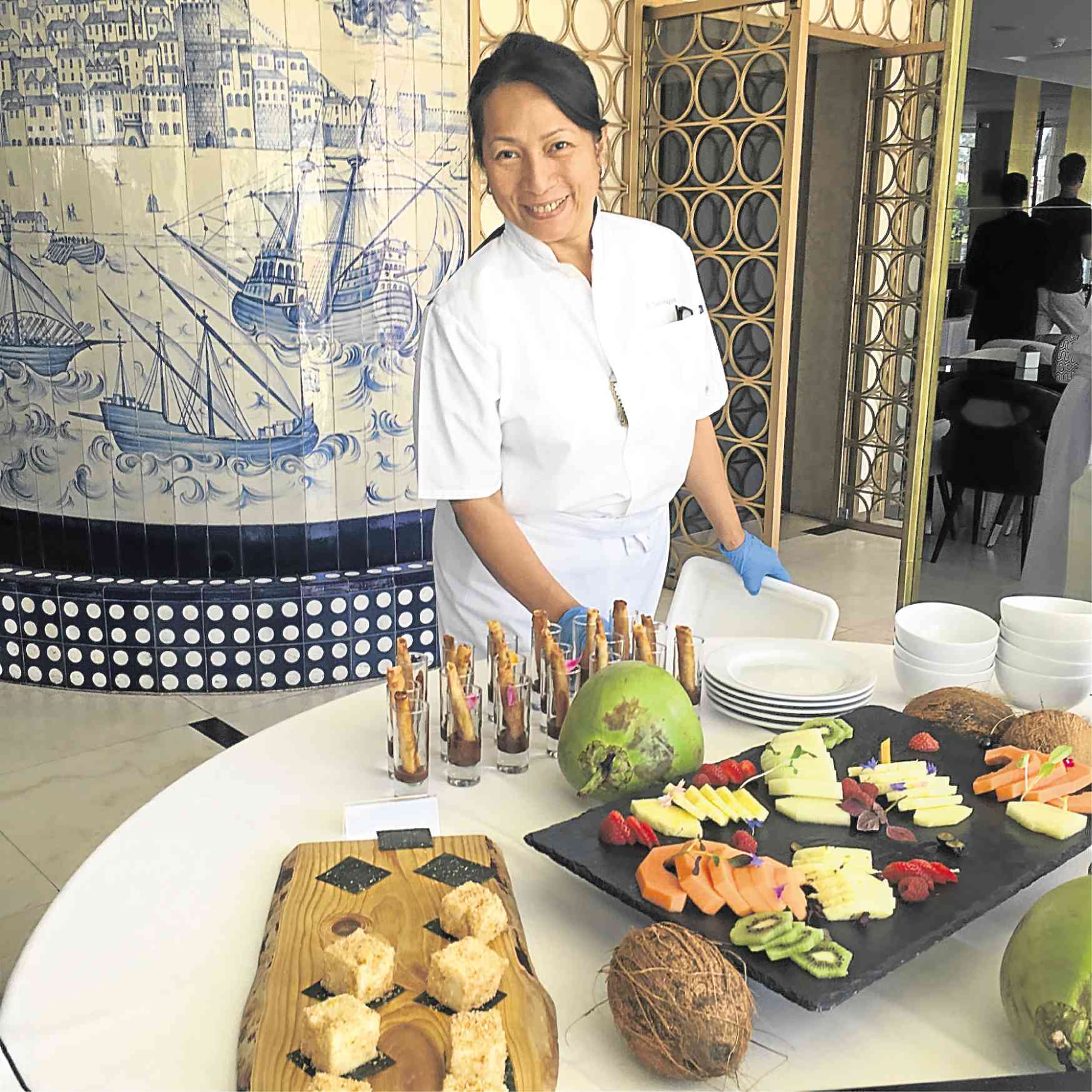 From ‘bacalao’ to ‘bagoong’: A successful Filipino foodfest in Lisbon

Think of a British couple having an early dinner at the rooftop Rossio restaurant of Lisbon’s posh Altis Avenida Hotel, and whispering, “This is so refreshing!” after a mouthful of kinilaw. Or the Portuguese writer who came for the adobo, which he topped his rice with. Or my favorite: the young Dutch doctor who tasted the maja blanca and the creamy guinataan—and proceeded to pour the latter over the former, proclaiming the combination “delicious.”

The last leg of “Lasap Pilipino (Philippine Flavors): A Culinary Tour with Chef Myrna Segismundo” took us to this gorgeous, sunny Portuguese capital, but we were far from winding down. Turns out Ma. Celia Anna “Cookie” Feria, our dynamo of a Philippine ambassador, had booked not one meal, not two nights, but a week—a full-blown foodfest, “Sabores Das Filipinas,” which included daily Filipino buffet lunches, evening fine-dining fusions, and a special belated cocktail celebration of Philippine Independence Day, to be hosted by the ambassador herself.

Looked like chefs Myrna, Raul Ramos, Anne San Diego and Tippy Benedito, plus the latest reinforcement of famed Filipino pastry chef Jill Sandique, were in for some work.

Meanwhile, I was banished from the kitchen (which is why I got to explore much of Lisbon). That’s because Altis Avenida’s young executive chef, Joao Correia, himself a force of nature who lived, breathed and dreamed food, had thrown his entire staff behind the effort, rendering me, well, purely decorative.

After a night’s rest, we met with Correia and his team, who had prepared a superb 10-dish degustacion that, amazingly, he wanted Chef Myrna to mess with—that is, he wanted her to add/substitute Filipino ingredients to make each dish more of an interaction.

A show of humility? “Well, I’m the first to be doing this with Filipino cuisine in Lisbon, so I’m the lucky one,” said Correia graciously. “I am extremely open-minded and have an interest in every kind of cuisine, and I am especially enthusiastic about Asian food.”

“Everybody eats, and food is something that they like a lot here,” added Feria, who relished the pre-dinner cocktail made in her honor, the Dona Celia, a cooling mix of Don Papa Rum, honey, black tea, and calamansi. “They eat so very well, and have so many restaurants. Maybe it’s about time we shared with them some Philippine ingredients they can try.”

“Yes, it’s about branding our food and ingredients and promoting them to foreign audiences, so they can have name recall,” agreed Segismundo. “This time, it’s about both traditional Filipino cooking, and deconstructing a classical Filipino dish. There is great focus on the ingredients being incorporated in a native dish of the country you’re visiting, and Chef Joao is very welcoming.”

Here were some dishes and their eventual reincarnations, each served with the perfect Portuguese wine. Correia began what we called his “Joao wow” with a grilled sardine toast (it was sardine season in Lisbon!) topped with peppers, garlic and parsley, on bread fried in olive oil, and washed down with a light vinho verde, a young Portuguese “green” wine.

The Filipino team’s version involved poaching the sardine in cane vinegar, bagoong, and calamansi (read: paksiw!), giving it a dimension of sourness that had the local chefs’ eyes popping. “This isn’t something you normally find in European cuisine,” Correia said. “I didn’t realize you could have the sourness and sweetness together in this way, and it’s just wonderful.”

Quail on a nest of fried onions, served with a meat sauce with port and mushrooms and a dollop of foie gras, got some added oomph from pickled mango and Don Papa Rum reduced with coconut sugar. Poultry liver with sliced grapes, Parmigiano toast, clarified butter and mushrooms benefited from diced dried mangoes. For the squid with lion’s mane mushroom and grilled roasted pepper, both the basil pesto sauce and the squid got a zing of calamansi.

A fillet of sole wrapped in black pig ham, with cherry tomatoes and puréed peas, was rubbed with bagoong, with the pea purée replaced with monggo hash with gata. Seared sea bass in a garlic and watercress emulsion was smothered in the familiar coconut and crab fat sauce. An osso buco with red wine sauce got adobo sauce instead.

Finally, with some heavenly “interference” from Jill, Correia’s strawberries with caramelized white chocolate, port, purple moscato, sweet pesto, and strawberry sherbet got an overhaul with crushed Marie biscuits mixed with coco sugar, dried mangoes, and mango liqueur that had Correia declaring, “This is insane.”

The lunch buffets featured Filipino favorites like fried vegetable lumpia that was so popular, the kitchen was scrambling to refill the platter; sauces and condiments, including a bagoong mango salsa and white radish and cucumber salad; and usual winners like sinigang na hipon, pancit bihon guisado, lechon kawali with liver sauce, and of course, the adobo and the omnipresent turon in Malagos chocolate.

Every night, after their day’s cooking, I would join the exhausted team in the hotel basement for drinks, dancing and riotous laughter, eating delicious leftovers, convincing Correia to visit Manila, and teaching everyone some Filipino words (not all of them nice, but I’ll stop there).

For the jam-packed June 26 cocktail event, Ambassador Feria arrived early in a lovely light blue Dennis Lustico piña ensemble, and delivered her welcome remarks on the terrace of the Rossio restaurant, with the backdrop of the Philippine flag. “This is what happens when we work together,” she noted, citing the successful foodfest.

Paris-based Department of Trade and Industry director and commercial attaché Froilan Pamintuan also came over for the event, to meet with retail industry bigwigs. From the embassy, Deputy Chief of Mission Evelyn Austria Garcia and First Secretary and Consul General Gines Gallaga and his wife, Moira, helped welcome guests.

From the kitchen, Chef Myrna, Raul, Anne, Tippy, Jill, and Correia and his team had guests chomping past the standard cocktail period of 5-8 p.m., enjoying hors d’oeuvres of Portuguese goat cheese, figs and ham, fried lumpia, octopus salad, a sardine paté with cucumber salad, turon, and a Jill Sandique showstopper, a sweet potato chocolate cake with cream and coconut crumble on top.

The Lisbon leg concluded with a demonstration by Chef Myrna at the Escola de Hotelaria e Turismo Lisboa, a prestigious institution of which Correia himself is an alumnus, and a sit-down dinner with top executives of the Jeronimo Martins group, the largest retail chain in Portugal, with over 400 stores.

The executives raved over the calamansi, which they dipped almost everything in, and were interested in the low glycemic index of coco sugar, what with Portugal apparently being a country with a lot of diabetics (which surprised nobody, actually).

“By working towards making Filipino products available overseas, we hope to lay down a stronger foundation for Philippine cuisine to be eventually introduced and recognized in the discriminating European market,” said Pamintuan, who is inviting Filipino exporters interested in the Portuguese market to link up with the Philippine Embassy in Lisbon and DTI.

It was a spectacular end to quite a culinary adventure. As Ambassador Feria herself said during the cocktails, surveying a roomful of people appreciating the food we Filipinos love: “See? This is cultural diplomacy.”